"THE DRUM commando with the rhythmic hummingbird and - to your ears - exported live grooves," once read the slogan of the Czech band FruFru, whose style is difficult to pinpoint, as it ranges from jazz and funk to jungle and pop.
This long, difficult to remember subtitle later shrank to "drum commando live", as did the number of the band's drummers, from five to three 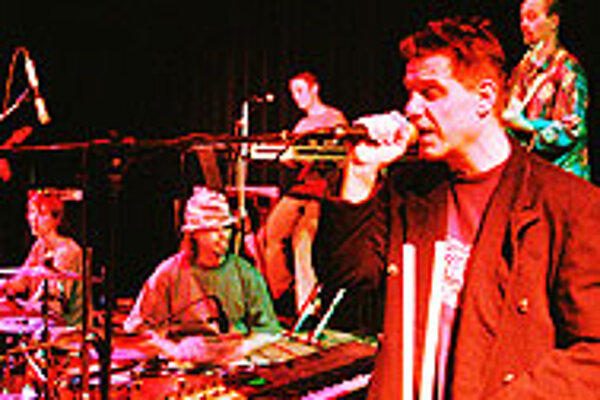 Font size:A-|A+  Comments disabled
"THE DRUM commando with the rhythmic hummingbird and - to your ears - exported live grooves," once read the slogan of the Czech band FruFru, whose style is difficult to pinpoint, as it ranges from jazz and funk to jungle and pop.

This long, difficult to remember subtitle later shrank to "drum commando live", as did the number of the band's drummers, from five to three. However, the band's philosophy - to have its classical, electric, and various other percussive instruments laid out in a non-standard way - has remained intact, though in a reduced sense.

"Bands usually have their drummer crouching at the back, almost invisible during live performances, but we place all our drums out front," said Václav Bartoš, the band's frontman and founder, explaining the drums' non-standard arrangement.

On Thursday, February 26, the band goes to the western Slovak town of Senica to start the first of two Slovak tours planned for this year. Visiting four other towns, the musicians will introduce completely new songs composed in a style that diverges from the band's original, heavy-classical-drum direction that are in preparation for their new CD.

"We have started to focus more on harmony and melody, bringing in more instruments than drums. There is less of that percussive playfulness than there used to be. We basically sing more," said Bartoš, the vocalist, keyboardist, and drummer. Apart from him and the two other drum and percussion players, the band has two guitarists/bassists, who also add various sounds and effects to the performance.

Bartoš writes most of the band's lyrics, another new addition to the band. Before, they composed music to poems by Prague writer Honza Volf, whose texts are generally considered difficult to process into songs.

Bartoš said that the band came upon Volf's texts by accident. "Before, we didn't want to do singing, I mean singing texts; we opted rather to use the voice as an instrument. But after reading Volf's poems, I had to change my opinion."

Originally, the band had only an occasional existence, playing at exhibition openings and similar events where Bartoš and fellow founding member Jan Coufal would invite other musicians to join them. The band was officially founded in September 2000 by seven musicians from the Czech town of Třebíč. They all also played in other groups with styles ranging from rock and jazz to blues, which helped to form the eclectic sound and style of FruFru.

Coufal had to leave the band when, after finishing law school, he decided to walk the judicial career path. "We thought that it could work [continuing to play with the band while focusing on his studies], but it proved impossible. But at least when I see people of this sort wanting to be judges, I am more relaxed," Bartoš said.

Like its slogan, the band's original name was also shortened - from FruFru Serious, for the exact same reason: too long and difficult to remember. According to Bartoš, the word "frufru" basically means nothing; it only suggests that something is juicy, fruity. Later, though, he learned that it means "gays" in slang somewhere in the middle of Italy.

"So, for a certain time we realised we had been calling ourselves Serious Gays," said Bartoš with a smile, adding that he has not noticed that any of the band's members are oriented that way. Not that he would mind.