LOOTING and protest rallies, mainly in the east of the country, dominated Slovak news footage over the past week as hundreds of Roma warned of increasing tumult. The theft and expressions of discontent come in response to what Roma say is an unbearable social situation following the cuts in social benefits in the Labour Ministry's social reform. 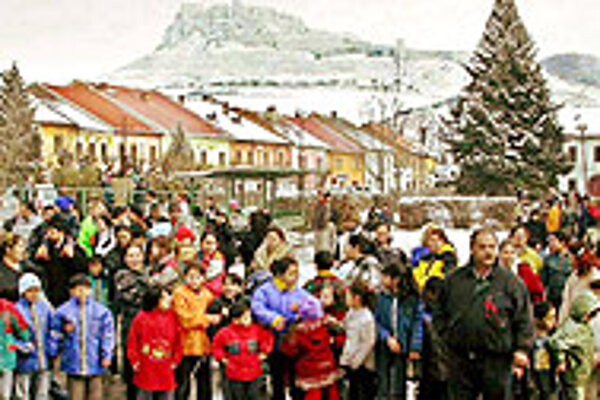 Font size:A-|A+0
LOOTING and protest rallies, mainly in the east of the country, dominated Slovak news footage over the past week as hundreds of Roma warned of increasing tumult. The theft and expressions of discontent come in response to what Roma say is an unbearable social situation following the cuts in social benefits in the Labour Ministry's social reform.

To pacify unrest, the cabinet decided on February 24 that 1,000 soldiers would be moved to the east to assist the police in preventing more disorder. For the first time since a prisoners' riot in Leopoldov in 1990, water cannons were used to calm protests.

In recent days, Roma looted shops and supermarkets in more than a dozen eastern Slovak towns and villages, including Levoča, Drahňovce, Čierna nad Tisou, Trebišov, Trhovište, Sačurov, and Čaklovo, and in the central Slovak village of Kameňany. Protests were also held in many villages and towns.

On February 24 alone, police arrested more than 100 Roma, and dozens more were apprehended during outbreaks on other days.

Observers and some state officials warned that immediate action was needed.

Labour Minister Ľudovít Kaník said the new social measures were a tool to motivate people to work rather than live off state support.

Following a meeting with Roma leaders in the middle of the week, Kaník announced, however, that his ministry had prepared 12 proposals that would alleviate the situation of socially dependent groups and proposed these plans to the cabinet.

The ministry encouraged Roma to join the system of voluntary work for local municipalities to regain the working habits that many have lost in more than a decade of massive unemployment since the fall of communism.

After the cabinet meeting, PM Mikuláš Dzurinda flew to the east of the country along with Interior Minister Valdimír Palko to see how the situation was being handled.

Dzurinda insisted that the protests and looting were not the result of the social reforms but rather the instigation of criminal elements.

Kaník claimed that local loan sharks had sparked the thefts and protests because they had lost a source of income after the state cut benefits to the Roma.

Roma leaders have said that the current problems are a result of a long-term economic and social situation in which the Roma problems have been neglected, and they accused the state authorities of a failure to improve the lives of the arguably most disadvantaged group of Slovak citizens.

"For years the cabinet has taken an ostrich stance towards the problems of the Roma; they just stick their heads in the sand," Alexander Patkoló, head of the Slovak Roma Initiative, told The Slovak Spectator.

President Rudolf Schuster joined critics of the cabinet and accused the ministers of failing to effectively manage the social reforms.

The coalition rejected Schuster's criticism, saying that he was misusing the current problems for his presidential campaign.

Though this and previous cabinets have prepared various programmes and strategies for addressing the problems of the Roma, members of the community say that the efforts have brought few visible results.

Unemployment among the Roma remains incredibly high, reaching 90 to 100 percent in some settlements, especially in eastern Slovakia.

The majority of the poorest Roma live in this part of the country, usually in ghetto-like settlements on the outskirts of towns and cities.

Just recently, the European Parliament's foreign committee appealed to Slovakia in a draft report on the country to take Roma problems seriously and to thoroughly implement its plans to improve their status.

In reaction to the looting of stores, Jan Marinus Wiersma, a legislator in the European Parliament and a special rapporteur for Slovakia, told the public broadcaster Slovak Television on February 23: "I think that the Roma have a right to decent lives, but at the same time they are obliged to respect the law."

Schuster, meanwhile, held a meeting with Kaník and Palko in which he expressed his concern over the situation, especially in the east of the country.

Palko said that there was no reason to panic, stating that the police had the situation under control and that patrols in critical areas had been strengthened.

However, he did not manage to allay fears that violence and radical groups could soon rise up.

"The atmosphere in the east is very negative and we fear that local radical groups might become active and cause more unrest," said Patkoló.

According to Patkoló, the cabinet should act quickly to prevent outbreaks. He said that Roma expected speedy compensation measures that would alleviate their situation. He added it was not only a matter of social cuts, but also decreased child support that troubled many Roma families.

Roma also appealed to the cabinet to approve laws that would enable positive discrimination in the work place "so that, for example, businesses that employ Roma get some benefits from the state," said Patkoló.

"Roma are down and they need extra help to be able to live decent lives," he said.

Klára Orgovánová, the cabinet's plenipotentiary for Roma communities, said she was surprised at last week's looting and appealed to the Roma to "act responsibly" and avoid any illegal activities.

She said, however, that the situation was the result of "long-term bad conditions in which there are many Roma families who depend on social benefits."

Observers are worried, however, that unless a decisive approach is taken to convince the Roma that the cabinet cares about their problems and that is has a genuine will to help them, frustration and aggression will rise among the Roma.

"The conflict may sharpen because frustration is growing. Roma do not see another way to express their discontent. The cuts in social benefits were counterproductive in some areas - they could not have acted as a motivational factor in an environment where jobs do not exist and where many Roma are under-qualified and unemployable," Martina Jurásková, an analyst with the Institute for Public Affairs think tank, told the SME daily.