THE STATE spends billions of crowns on pharmaceuticals every year. The empty pockets of the healthcare sector signal that changes in the drug policy are in order - mainly to reduce the cost of prescriptions.
According to the Health Ministry, patients do not consume a significant portion of medications prescribed to them; rather, they stockpile them for "worse times".
Physicians sometimes prescribe expensive pharmaceuticals when they could have prescribed a cheaper version with the same effect. 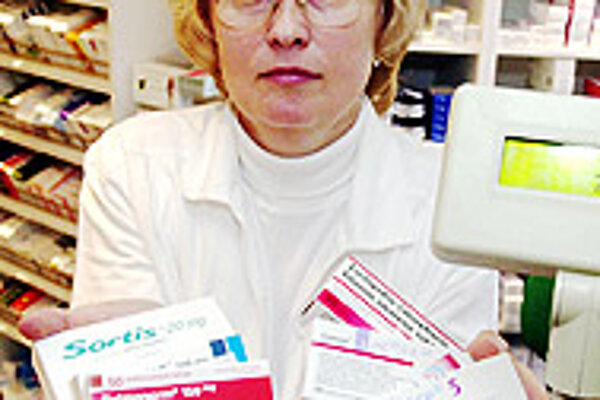 Font size:A-|A+  Comments disabled
THE STATE spends billions of crowns on pharmaceuticals every year. The empty pockets of the healthcare sector signal that changes in the drug policy are in order - mainly to reduce the cost of prescriptions.

According to the Health Ministry, patients do not consume a significant portion of medications prescribed to them; rather, they stockpile them for "worse times".

Physicians sometimes prescribe expensive pharmaceuticals when they could have prescribed a cheaper version with the same effect.

Pharmaceutical firms and physicians have no consistent response to proposed policy changes. Some of them consider measures to simply be administrative barriers that would do nothing to curb the waste of state money and would prevent patients from having the most modern treatment.

Since June 2003, Slovak legislation has set a fixed ratio between what a patient pays and what an insurance company pays for a prescription, regardless of the price. This legislation also ushered in limits on the volume of medications that a physician can prescribe for specific diseases or ailments. The Health Ministry has already prepared proposals for the introduction of further measures, such as prescription record books and substitution by generic drugs.

According to Angelika Szalayová from the drug policy department of the Health Ministry, the fixed payment ratio should prevent situations in which decreasing drug prices encourage the prescription of expensive drugs.

Before, two medications with the same effect but different prices were placed into separate categories that required different additional payments from patients. They may have both had the same effect, but a more expensive prescription, which would theoretically be more modern or advanced, might be appropriate, for example, for people prone to allergic reactions.

"The lower additional price for patients should have motivated physicians to prescribe the cheaper medicine, if, of course, there was no threat of allergic reaction," explained Szalayová.

If the price of the prescription was lowered, a patient's additional payment was decreased as well, but the insurance company's payment stayed at the same level.

"Some firms used to take advantage of that measure. They would lower the price of an expensive medication, so the patient paid less, making it more likely that physicians would prescribe it," she added.

The result was that expensive drugs were prescribed more than cheaper ones, although the majority of patients did not need treatment with special drugs.

With the new fixed ratio measure, if a pharmaceutical price falls, the payments of patients and insurance companies both decrease. The ministry can regularly update the ratio with new price categorisations.

The second measure, which limits the amount of money a doctor can spend on prescriptions for a particular disease, is usually set according to the average number of prescriptions in each specific field of medicine. Each of the five health insurance companies in Slovakia can specify its own limits and the conditions for applying them.

"This measure should force physicians to think more economically. Of course, the health of a patient must never be endangered. I fully understand that, as a physician, you want the best for your patient and you try to give him or her a treatment with minimal side effects," said Szalayová.

"But again, not all patients need medication developed for more sensitive people, as long as the prescription has the same therapeutic effect," she added.

She also emphasized that health insurance companies usually do not apply the punishment for exceeding the limits if physicians can explain why they used the particular prescription. Milan Velecký, the spokesman of the health insurer Všeobecná zdravotná poisťovňa (VšZP) says: "VšZP allows the limit to be surpassed by over 20 percent. Doctors can expect to be punished if they exceed the limit by 50 percent without an explanation".

The Slovak Association of Research Based Pharmaceutical Companies (SAFS) disagrees with the fact that economic criteria should be the priority in drug policy. It argues that the new measures rob physicians and patients of their options. "There is always uncertainty about an individual organism's response to a particular medication. In our opinion, physicians and patients should always have a choice," Soňa Strachotová, executive director of SAFS, told The Slovak Spectator.

SAFS acknowledges that healthcare sources are limited. However, the association remarked that there are some new pharmaceuticals that still do not have a cheaper, "generic" licensed version.

Besides the fact that everyone wants to receive treatment that is as modern as possible, SAFS emphasized that the state should also take into account pharma-economic indicators. It means that more effective, although maybe more expensive, medications could help a sick person return to work more quickly, thus cutting down on the government's sick-leave payments.

Alexander Černák, chairman of the Association of Foreign Producers of Generic Medication (GENAS), also thinks that: "Prescription limits might encourage physicians to use drugs with lower prices. And now I am not talking about original or generic medicine.

"It could happen that a doctor prescribes cheaper medication that has been on the market longer, meaning it could be less effective," he added.

Prescription record books, which the Health Ministry would like insurance companies to introduce, would monitor all the medications that various specialised doctors prescribe to a patient.

This would prevent the double prescription of drugs and the combined prescription of substances that, when used together, have harmful side effects. The ministry, insurance companies, and pharmaceutical producers consider the books a useful measure.

But SAFS is less optimistic about generic substitution - another proposed ministerial measure. According to the measure, pharmacists are obliged to inform a patient, after the submission of a prescription, that there is a generic, less expensive version of a pharmaceutical. If a patient agrees, a pharmacist can offer him or her the lower priced one.

The ministry says that some physicians, even if they know there is a cheaper alternative with the same effectiveness, often do not inform a patient. Now, a pharmacist could become a second information source.

GENAS is confident that pharmacists would be able to advise patients about the right alternative. "If we talk about original and generic drugs, they are the same, they have the same therapeutic effect. There might be a little difference in the additional substances," said Černák.

Whether a pharmacist would be able to judge the side effects of those additional substances remains unclear, as does the question of who would be responsible if a patient were harmed by the drug recommended by a pharmacist. SAFS also warns that patients may substitute medications too often.

However, Szalayová said that physicians could prevent such accidents by adding a note to a prescription that "this medicine is necessary" and in such cases a pharmacist would be unable to change the drugs.

The Health Ministry and GENAS reject speculation that the measures could threaten a patient's right to adequate and correct treatment. "Some decisions will, for sure, be economically conditioned and some pharmaceuticals may become less affordable, but it will not happen that a patient is cured less effectively," said Černák.

The ministry says it expects the measures to bring overall savings in prescription costs but it has no exact predictions yet. "Those are different measures; some of them are applied by health insurance companies. It is hard to calculate savings," added Szalayová.

"For example, we have information that the fixed payment ratio has helped stabilise costs and, in fact, they might be lower than those of the previous year. However, it is too soon to know", she summarised.