WOMEN from far and wide travel on Shrove Tuesday each year to Ivanka pri Dunaji, a small municipality near Bratislava. They come to celebrate the end of the Shrovetide period in their own way: They, the women, are in charge of whom to invite to dance.
The event, fittingly called Babská (Girls'), starts at 8:00 in the morning and ends at 16:00 with a symbolic burial of a double bass 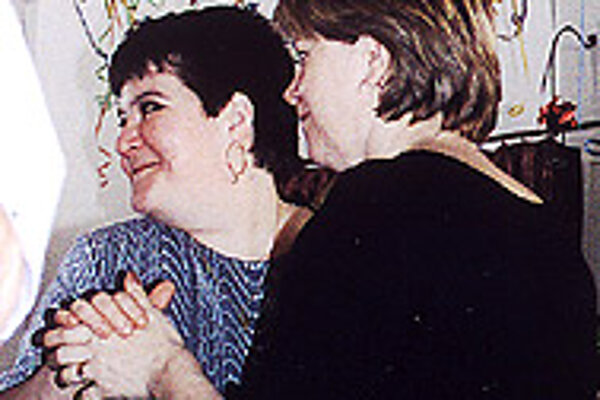 Font size:A-|A+  Comments disabled
WOMEN from far and wide travel on Shrove Tuesday each year to Ivanka pri Dunaji, a small municipality near Bratislava. They come to celebrate the end of the Shrovetide period in their own way: They, the women, are in charge of whom to invite to dance.

The event, fittingly called Babská (Girls'), starts at 8:00 in the morning and ends at 16:00 with a symbolic burial of a double bass. The women often collect hours before the start to grab the best seats at the tables that line one side of the dance floor in Ivanka's Matičný House. It was no different on this year's Shrove Tuesday, which was on February 24.

"When we arrived with the keys at 8:00, there were around 50 women waiting in front of the entrance, losing their tempers because they had been waiting since 6:00 and were freezing," said Imrich Horváth, 70, a member of the Folk Band Ivanka. The band organised the event and, alternating with its younger offshoot, 11-tka (Eleven), provided the musical accompaniment to the dance.

Shortly after the women seated themselves and emptied their bags of the titbits they had baked the evening before, the entertainment started. They first invited each other to dance, but the focus later shifted to the men who had arrived. Those forced to wait until a woman invited them to dance often bothered the passing girls by asking to be picked.

Nobody seems to remember when the ordinary Shrovetide entertainment turned into this girls' tradition. The oldest participants recalled their mothers, and even their grandmothers, attending the dance event, which bore the caveat "Entry for men from 15 to 100 is prohibited". Some speculate that the primarily female servants of the local feudal monarchs founded the tradition when they were granted that specific day to entertain themselves.

"Reportedly, when this dance entertainment originated, men, apart from the musicians, did attend in small numbers. So, if all the women wanted to dance, they had to start dancing with each other," said Oľga Chovančáková, who helps organise the event.

"To enrich the entertainment, women would pull off each other's headscarves, which they could then gain back in an auction that paid the musicians. Some women put on various masks and costumes, which took the form of men's clothes - the outfits of butchers, smiths, and chimney sweeps.

"Men were rare at these dances, so when they appeared, women would grab them away from each other. They mainly chose the young and handsome, and if a woman was satisfied with her dancer, she would invite him for a drink," Chovančáková said.

Even though the number of women and men is almost balanced today, the tradition that women invite men to dance has remained. Men get only one chance to choose a dancer throughout the whole day. And it is certainly no rarity to still see a woman dancing with a woman.

The women have kept the tradition of dressing in costume, but they no longer steal each other's headscarves. This custom has been substituted with a raffle, in which local firms and individuals contribute various, mainly entertaining, presents. Traditionally, the main prize is a pair of the grannies' bloomers, bombarďáky. The winner puts them on and dances a solo.

During the closing ceremonial burial of a bass, the musicians sing a farewell prayer peppered with topical lamentations that ask the bass, for example, to "protect us from other presidential candidates, other Roma raids, or our shrewish mothers-in-law".

Many of the "girls" in attendance are in their 50s or older, but one would be surprised by how energetic, temperamental, and entertaining they can be. Some, like Kristína and Angelika Angyalová from Čierna Voda, continue the celebration in the nearby Slovenský Grob after Babská finishes.

"Babská today is mainly about having great fun," said Chovančáková.

Since the event takes place in the middle of the working week, most of the participants have to ask for work leave. Men say it is worth it because of the "girls and lots of fun". The women come because they want to have a break from their husbands, or want to find a new one.

"My mom used to go to Babská with her [female] neighbours every year. She would say, 'Let's go; while our old men are at work, we can have some fun'," said the 62-year-old Alžbeta Belzárová from Senec, who follows in her footsteps.