AFTER months of tense anticipation, Slovakia received word from the Geneva car fair that the South Korean car colossus would build its new plant in Žilina, the country's offered site for the €700 million investment in central Europe.
Hyundai's Kia Motors, which chose Slovakia over Poland on March 2, became the third global automotive firm, following Germany's Volkswagen and France's PSA Peugeot-Citroen, to take up residence in Slovakia. 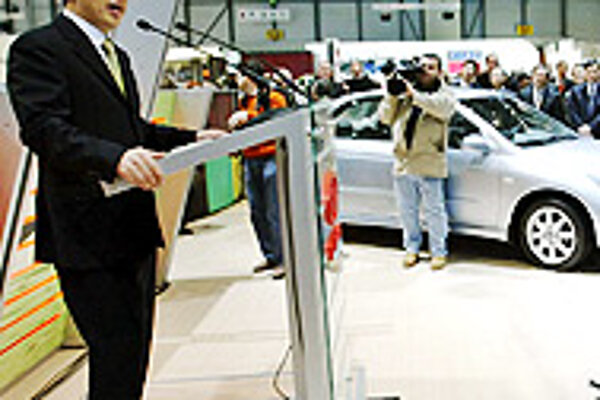 Font size:A-|A+0
AFTER months of tense anticipation, Slovakia received word from the Geneva car fair that the South Korean car colossus would build its new plant in Žilina, the country's offered site for the €700 million investment in central Europe.

Volkswagen picked Slovakia in the early 1990s, and PSA Peugeot-Citroen added a huge brick to Slovakia's car empire when it chose the southwestern city of Trnava as the site for its new plant, which is to roll out 300,000 cars annually.

The investment documents between Slovakia and Kia Motors should be signed on March 16 - 17 and the plant's cornerstone laid on April 7. By then, the Slovak government has to find the money in the state coffers to pay the incentives.

"We will have to find Sk1.5 billion or Sk1.6 billion for this year," Finance Minister Ivan Mikloš told the press.

As the budget reserve is only at Sk260 million (€6.4 million), Mikloš plans to get the cash by partly freezing spending in some other budget chapters.

The Slovak officials confirmed that the overall incentives would not exceed 15 percent of the investment, in accordance with the rules of the European Union, which Slovakia is due to join on May 1.

The plant, with an estimated annual production of 200,000 cars is slated to open by late 2006. Slovakia fought hard for the investment, which promises the country 2,400 jobs.

Analysts do not find bombastic statements suggesting that Slovakia will become a world leader of world car production an exaggeration as the central European country will be rolling out up to 800,000 cars a year from 2007.

According to TASR, the Slovak Agency for Investment and Trade Development is discussing possible factory investments with carmakers Rover, Mazda, and Honda, which could push automobile output even higher.

Marek Gábriš, an analyst with the bank ČSOB, told The Slovak Spectator that the characteristics that make Slovakia appealing for carmakers are generally known: developed infrastructure, a functioning network of auto-component suppliers, low costs and a skilled workforce, a reform-oriented business environment, and weaker trade unions compared to Poland.

Slovak Prime Minster Mikulás Dzurinda, who is struggling to keep the ruling coalition from sinking, said the Hyundai decision shows that Slovakia is on the right track. However, the South Korean choice binds Slovakia to fulfil all its promises to the automaker.

Apart from other investment stimuli, the Slovak government promised to complete the highway connection between Bratisalva and Žilina and help the investor settle ownership of the site and procure investment property.

Slovak Transportation Minister Pavol Prokopovič said that the construction of a new highway section between Ladce and Žilina will cost the state Sk22 billion (€542 million), which is several times higher than the sum the state promised the carmaker in financial incentives.

The Slovak Transport Ministry plans to build a new railway terminal in Teplička, near Žilina, which would cost from Sk638 - 900 million (€15.7 - 22.16 million), depending on the chosen project, the news wire SITA wrote.

However, Slovakia's offer of investment stimuli to Hyundai-Kia did not include any tax bonuses.

"Incentives for investors are important in the initial stages, but later on during the actual production process they should start paying taxes," Rusko told the press.

Hyundai-Kia is the third global automotive firm after Toyota and Citroen Peugeot to turn down Poland. According to experts, Poland's knotty officialdom and the lack of highway infrastructure dissuaded the companies.

Analysts say that gluing the Slovak economy to the automotive industry does not involve extensive risks.

As long as the country benefits from its cheaper labour force compared to other European countries, any global automotive industry crisis should not have a serious impact. Problems may arise when automotive investments expand eastwards to successor countries of the former Soviet Union, or even further to Asian countries, for example India, SITA wrote.

Even the French carmaker PSA Peugeot Citroen said the Kia decision was good news and hopes to benefit from some of the synergetic effects of the arrival of subcontractors for its South Korean colleague. PSA Peugeot Citroen will not modify any of its plans.

The new plant will strengthen Hyundai's position in Europe.