THE LAST part of the Lord of the Rings trilogy predictably led the 76th Annual Academy Awards by winning the largest number of Oscars. It won in all 11 categories it was nominated, including the event's most prestigious award: Best Picture. The crew behind the Best Foreign Language Film, Les invasions barbares (The Barbarian Invasions), thus could only happily conclude that The Lord of The Rings: The Return of the King did not qualify in this category, as well. 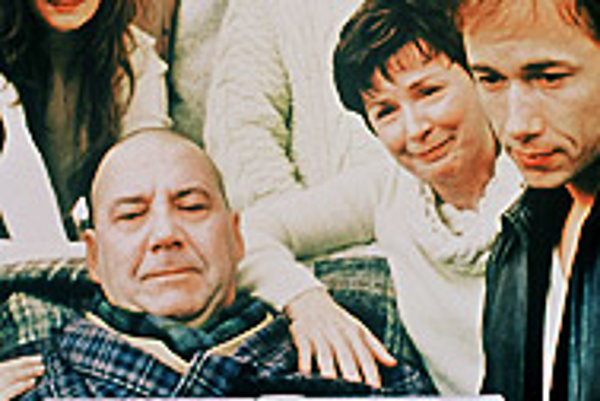 THE LAST part of the Lord of the Rings trilogy predictably led the 76th Annual Academy Awards by winning the largest number of Oscars. It won in all 11 categories it was nominated, including the event's most prestigious award: Best Picture. The crew behind the Best Foreign Language Film, Les invasions barbares (The Barbarian Invasions), thus could only happily conclude that The Lord of The Rings: The Return of the King did not qualify in this category, as well.

Fresh from its triumph in Hollywood, Les invasions barbares comes to attack Slovak cinemas. The provocative French Canadian comedy about "sex, friendship, and all other things that invade our lives" and directed by Denys Arcand is one of the 10 films screened within the final year of Project 100, which started last week.

Project 100 is the largest travelling non-commercial Czech and Slovak film festival. Its last, jubilee year runs from March 1 to May 31. The 10 movies, comprised of selections from the Golden Fund of World Cinema as well as successful recent movies, can be seen in their original languages with Czech or Slovak subtitles at 32 cinemas across the country.

The English-speaking films are the four-Oscar-winning Annie Hall by one of cinema's most significant, atypical comedy creators, Woody Allen; the light-horror story of Rosemary (Mia Farrow) in Roman Polanski's Rosemary's Baby; The Elephant Man, David Lynch's narrative about a man with a deformed head; and Raging Bull, Martin Scorsese's account of the life of boxing champion Jake La Motta, played by Robert De Niro, who landed a Best Actor Oscar for his part.

Among the project's non-English and most recent movies is the tragicomedy Les invasions barbares about a malignant university professor who is dying of cancer, and his estranged son, who diverts his father from reality by gathering together his old friends and lovers. Another 2003 work is the Russian film Vozvraščenije (The Return) by Andrej Zvjagincev, which tells the story of two brothers surprised by the unexpected return of their lost father.

Other movies include Fanny och Alexander (Fanny and Alexander), a mosaic composed of fantasy and the childhood memories of Swedish director Ingmar Bergman. The film Tokyo Monogatari (Tokyo Story), about a relationship between an aging couple and their children, will be the Slovak premiere of renowned Japanese director Yasujiro Ozu. The Czech psychological drama Spalovač mrtvol (The Cremator), directed by Juraj Herz in 1968, represents the local cinema. Film number 10 is Federico Fellini's classic La Dolce Vita.

Jiří Králík founded Project 100 in 1995 to celebrate the 100th birthday of cinema and to enrich the alternative film distribution market of the Czech Republic and the project's partner, Slovakia.

During its decade-long history, the festival has introduced Czech and Slovak audiences to many films they had never seen before, including the work of Nick Park (the Wallace and Gromit shorts, Chicken Run) and the work of the Monty Python group. The film that has drawn the largest audiences in Slovakia is Pink Floyd: The Wall by Alan Parker, followed by Salo, or the 120 Days of Sodom by the controversial Pier Paolo Pasolini.

The project started in 22 Czech and nine Slovak cinemas. Now, the number has grown to 141 and 32 cinemas, respectively. It has also helped bring about new filmclubs and distribution companies. Its name symbolised the goal to annually present 10 films over 10 years in these two former communist countries, an achievement that will be completed this year.

"The results bind us to continue in this distributive experiment," said Králík. "A new form of this travelling display will emerge in 2005. It will feature premieres of restored films from the Golden Fund of World Cinema, some of which may have already appeared in previous years - because there is a new generation of film lovers that has not had the chance to see such movies as Vertigo and The Deer Hunter on the screen."