Versatile, but a bluesman at heart

NOT HAVING the patience to take formal lessons, he taught himself the guitar by listening to and observing other musicians. At the age of 13 he held his first concert and in the 1990s his songs helped to revitalise the country blues tradition. He has also directed and starred in several off-Broadway musicals.
Above all, though, musician, composer, actor, director, and writer Guy Davis has always been a bluesman. 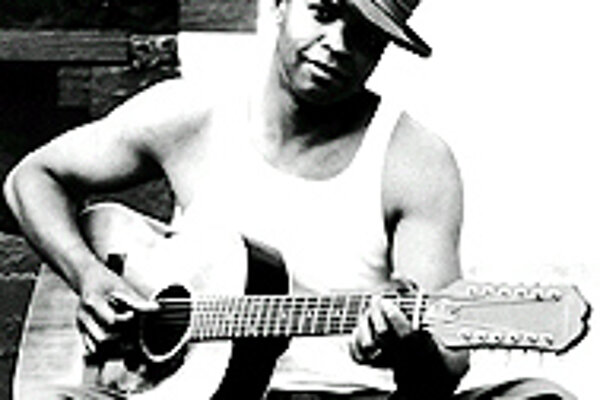 Font size:A-|A+  Comments disabled
NOT HAVING the patience to take formal lessons, he taught himself the guitar by listening to and observing other musicians. At the age of 13 he held his first concert and in the 1990s his songs helped to revitalise the country blues tradition. He has also directed and starred in several off-Broadway musicals.

Above all, though, musician, composer, actor, director, and writer Guy Davis has always been a bluesman. He has been praised for transferring the black acoustic blues tradition into modern times with his covers of the works of "blues classicists" as well as his own songs, which are peppered with the stories of his elder family members.

Currently on a European tour, Davis stops to play for a Slovak audience on March 14 at Bratislava's Za Zrkadlom Club. His performance is an unofficial continuance of the Livin' Blues festival, which runs a day before at the Lúky Culture House, which is organised by a different body (see box).

"Davis is among the top musicians in his genre. He is a very interesting personality; that's why we would like to introduce him to a Slovak audience," said Dušan Janďourek, the music programme manager of the Za Zrkadlom Club in the Petržalka district of Bratislava.

Slovak duo Dura Turtev and Rado Špička will support the American bluesman at his concert, which starts at 20:00.

"Davis initially caught my interest with his album Call Down the Thunder [1996] and then he blew me away completely with his Butt Naked Free [2000]. It's a clear continuation of the Afro-American blues message [delivered] by such legends as Tommy Johnson, Charley Patton, and Son House. His rough-voiced yet fragile interpretation is unbelievably honest and emotionally strong," said the blues guitarist Juraj Turtev.

"He is rooted in the country blues [that originates] from the Mississippi Delta, but one can also hear folk-tuned ballads and finger-picking ragtime in his music," Turtev added.

Even though Davis was born and grew up in New York City, he listened to his parents and grandparents tell stories about life in the rural South that ranged from cotton picking to Ku Klux Klan tragedies. These stories, as well as stories of his own childhood in the suburbs of New York, would later sneak into his songs, establishing Davis as a great storyteller in the tradition of the best early bluesmen.

"His texts reflect everyday experience; they are simple and funny, and at the same time strong and merciful," Turtev said.

Davis is the son of the distinguished actors and writers Ossie Davis and Ruby Dee. He started pursuing an acting career in 1978, when he recorded his first album, Dreams About Life, produced in cooperation with the legendary Moses Asch.

In 1984 he appeared in the hip-hop film Beat Street. The projects that enabled him to best enforce his two loves - music and acting - were Mulebone, the 1991 Broadway production, and the 1993 off-Broadway production Robert Johnson: Trick the Devil. The latter won him the Blues Foundation's WC Handy Keeping the Blues Alive Award. He also performed with his parents in a theatre piece called Two Hah Hahs and a Homeboy (1995), which combined original material with African-American folklore and history.

Altogether, Davis has released six CDs. The third, You Don't Know My Mind, was nominated for three WC Handy Awards, including one for Davis himself as Best Acoustic Blues Artist. His albums Butt Naked Free and Give in Kind were produced by John Platania, the former guitarist for Van Morrison.

Davis plays solo and with a band. At his Bratislava concert he will perform alone - singing and playing his guitars and harmonica with foot stomping accompaniment.

"The concert might end up with jam sessions, though, as he is coming with [Canadian bluesman] Marty Hall," Janďourek predicted, as Hall, the co-owner of the Urbanworld agency in the Czech Republic that is behind the concert, is scheduled to perform with Davis in Vienna on March 11.