Designing golf's future for everyone

THE SPORT of snobs or everyone's game? As golfing culture begins to put down roots in Slovakia, those with a hand in the sport are deciding what it will look like.
One of those people is Branden Wilburn, a golf course and landscape architect from the United States with strong feelings about the game and its future in Slovakia. Real excitement fills his voice when he talks about designing, building, and then playing a course. 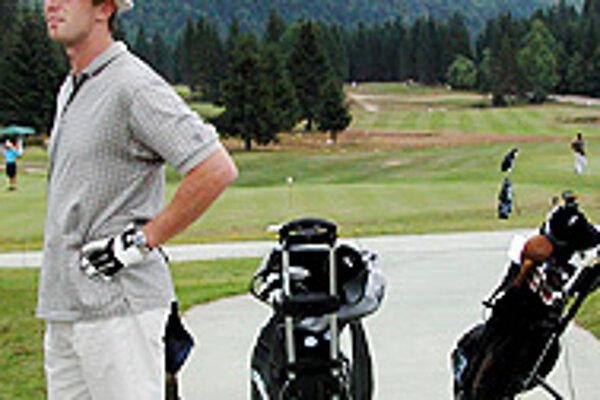 Font size:A-|A+  Comments disabled
THE SPORT of snobs or everyone's game? As golfing culture begins to show its face in Slovakia, those with a hand in the sport are deciding what it will look like.

One of those people is Branden Wilburn, a golf course and landscape architect from the United States with strong feelings about the game and its future in Slovakia. Real excitement fills his voice when he talks about designing, building, and then playing a course: "How many people get to design a game?" Here in Slovakia he has the chance to help design the whole industry.

Raised in Florida, a golfing state where, he says, everybody has a course, Wilburn began playing at the age of 11 and has designed and overseen the creation of golf courses for 11 years. After he married a woman from Slovakia, he moved to the country, planning to use the opportunity to expand the practice of his firm, Golf Design Studio.

Because golf is still small here, he believes, education must be the main focus of projects in this country. Practice facilities and smaller courses nurture a growing golfing community because they are cheap - and therefore accessible - and allow fresh golfers to practice their swings.

Incorporating such teaching centres, he goes on, also develops future clients: "You're aiding the golfing public and you're developing future clients for your projects."

The country's golfing history extends back to the first course in Tatranská Lomnica in 1908. But since then developments have come slowly, and in 1991 there were no courses to be found. Slovakia now has one 18-hole course: the Tále Gray Bear course in the country's centre, in the shadow if the Low Tatras mountains. There are also four nine-hole courses: in Bernolákovo outside of Bratislava, and in the central-eastern towns of Veľká Lomnica, Tatranská Lomnica, and Košice. The Košice course, however, was out of commission last year.

Some new spots are also in the making. This spring a nine-hole course will open in Piešťany, in the High Tatras construction has begun on the first nine holes of a project that will gradually expand to 27, and an enlargement project at Bernolákovo will soon begin.

In addition, about a dozen clubs are scattered around the country, some of which are connected with a course, driving range, or practice facility.

Augustín Hauskrecht, general secretary of the Slovak Golf Union, which had 2,116 members last year, and the emerging Slovak Golf Association, agrees that the primary thing Slovakia needs is more courses.

"The system of many clubs without technical facilities satisfied the time when golf needed a quantity of members. Now has come a time when a quantity of courses and training grounds also needs to be obtained," he said.

"There is much to be done here," Wilburn agreed. "There are a few golf courses around and a few driving ranges. But one, they don't advertise and if they do it's a sign alongside the road; so that's a major thing, you have to advertise. Two, it is expensive. These golf courses around here are not that cheap, and they don't offer that much for the money."

Founded as a division of another landscape firm about three years ago, Wilburn's Golf Design Studio eventually became its own company. With two other partners in the US, one in Finland, and an employee in Scotland, the firm aims for an international field of operation. Case in point, it is currently in the middle of a project in Cyprus. In addition to Slovakia, Wilburn wants to focus on the whole eastern European region.

"If you do something like these smaller facilities for new players you can get more local golfers involved. Eventually they'll start playing on the practice holes that you have and then go to the nine and 18-hole courses... This is a necessity if you want to ever develop the golf population here. If you do one or two of these just outside of Bratislava, you've got a huge population that you can start getting involved," Wilburn said.

Unfortunately, he says, big courses like 18-hole facilities are what most developers seem to have in mind.

"Right now in Slovakia, that just won't work. You don't have enough of a golfing population in Slovakia to support that type of facility. And you have to ask yourself: Are there enough tourists coming in and where are they coming from, and are they coming here to play golf when you have places like Spain, Portugal, Italy?

"It's tricky because a lot of developing golf communities are starting to fall into the ways of the older golf, where it's more high society, and very expensive, and an elite club - and that's not what golf really is. Golf is for everybody... if you stick with the large, 18-hole facility, only the people who can afford it will play it; you never really develop new clients."