OH TOMMY boy. Tom Cruise, you try so hard to prove yourself a great actor. Yet, you frequently fail so miserably. It's not your fault: Your heartthrob status makes directors cast you in everything, forcing you to try to be the toughest of tough guys, the most earnest of do-gooders, the sappiest of romantic saps, or the most jaded of misanthropes. When will they realise that it's all a façcade: You're nothing more than a likeable, but vacant, pretty boy. 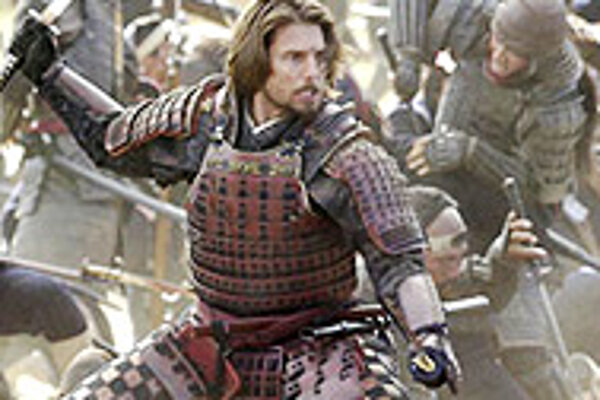 OH TOMMY boy. Tom Cruise, you try so hard to prove yourself a great actor. Yet, you frequently fail so miserably. It's not your fault: Your heartthrob status makes directors cast you in everything, forcing you to try to be the toughest of tough guys, the most earnest of do-gooders, the sappiest of romantic saps, or the most jaded of misanthropes. When will they realise that it's all a façcade: You're nothing more than a likeable, but vacant, pretty boy. Paul Thomas Anderson realised it, and you gave an almost perfect performance in his Magnolia.

But like most, The Last Samurai misses the point. In a way, though, it's fitting: It tries so hard to do justice to its subject that it completely misses its essence.

Like any genuine Hollywood historical war epic, it announces itself with as much fanfare as possible - a bona fide A-list movie star, bombastic music, meticulous costume and art design, high melodrama, and a story in which everything unfolds as clearly and as satisfactorily as possible.

Cruise plays Nathan Algren, a hero of the US Civil War who has taken part in some of the bloodiest of Native American massacres, leaving him a grizzled, drunken, cynical, emotional mess in desperate need of salvation. After being offered a hefty sum, he journeys to Japan to train soldiers in modern, Western warfare so they may wipe out the country's samurai. The pro-Western Japanese elite views this as the key to Japan's international success. Algren sees it as a way to make money doing "the only job [he is] suited for: eliminating another tribal leader".

Alas, no salvation in sight. But wait! Despite Algren's insistence that the troops are not prepared to face the fearsome samurai, the unit goes into battle. Unsurprisingly, this proves a great miscalculation. Algren is captured, but his life spared after his fierce determination impresses and intrigues the samurai leader, Katsumoto (Ken Watanabe).

And so, Algren goes to the remote, idyllic samurai settlement, where he remains a most well-treated prisoner. At this point, the film becomes not only a love letter to Tom Cruise, but to samurai culture, as well: It means to depict its beauty as faithfully and passionately as possible.

But there is a problem. A large part of the attraction for Algren and the film is the quiet dignity of the samurai - the honour, respect, grace, and humility with which they approach everything: their enemies, nature, tradition, the battlefield. The samurai do not broadcast their achievements; they reach them humbly and make it look effortless.

For a film that locates its main tragedy in the death of this honourable tradition at the hands of the big guns of Western modernisation, it is counterproductive to employ Hollywood pomp and circumstance.

Japanese samurai cinema has certainly not shied away from colourful characters and extreme stylisation. But it succeeds when these things are allowed to function in their own space and not forced to appeal to audiences raised on Braveheart and Dances with Wolves.

If you want to celebrate serenity, why use a bunch of bells and whistles? They only drown out the silence.