Bill sheds the past

SLOVAKS will see richer political parties, elections shrink to one day, and the 48-hour campaign ban erased after the parliament's amendment to the country's election act on March 9.
The modernised act condenses the polling period from two days to one, a Saturday, and stretches the campaign period to 21 days. 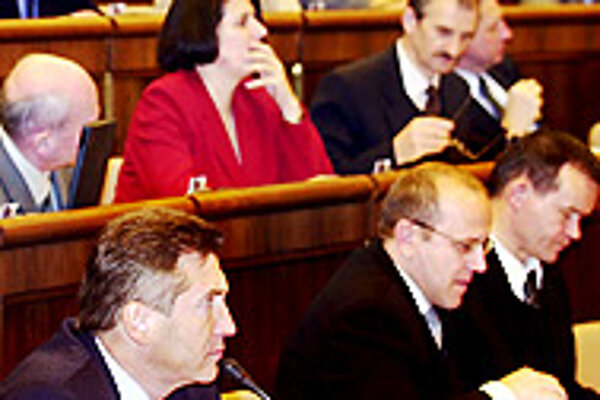 Font size:A-|A+0
SLOVAKS will see richer political parties, elections shrink to one day, and the 48-hour campaign ban erased after the parliament's amendment to the country's election act on March 9.

The modernised act condenses the polling period from two days to one, a Saturday, and stretches the campaign period to 21 days.

The act is good news for private broadcast media, which, after being banned from campaigning for many years, will now be able to legally join the political campaigns.

Allowing Slovak citizens living abroad to vote by mail also comes as one of the long-awaited changes.

However, Slovakia will keep a single electoral constituency, as the Slovak lawmakers rejected a proposal to split Slovakia into four or eight constituencies originally supported by the country's Interior Minister, Vladimír Palko.

The Leader of the Free Forum, Ivan Šimko, who parted from Prime Minister Mikuláš Dzurinda's Slovak Democratic and Christian Union (SDKÚ) on bad terms last December, submitted the proposal, which is favoured by NGOs and open society activists.

The ruling coalition claims that the act is a good compromise, with Palko calling it "the best possible solution".

The cabinet of Mikuláš Dzurinda has preserved more of the Mečiar-era election act than it had promised in its program statement, critics argue.

However, some analysts claim that revising the country's election legislation definitely closes an era when laws were designed to give advantages to some political parties over others.

"The new law is certainly an improvement in several aspects over the previous legislation," Peter Novotný from Civic Eye, an organisation that is active in the development of an open society in Slovakia, told The Slovak Spectator.

"We particularly appreciate the possibility for Slovaks to vote from abroad, the participation of private media in election campaigns, and the increased weight of preferential votes is also a positive change," he said.

According to Novotný, however, the negative aspects of the new law were the preservation of a single constituency and the abolition of the moratorium on the public release of information related to parties and candidates in the final run-up to the elections [48 hours].

"In developed democratic states with a proportional election system such as Slovakia, it is common to have more constituencies just to bring politics closer to the people and to avoid a centralistic nomination of party candidates," Novotný said.

The opposition is dissatisfied with the law. Movement for a Democratic Slovakia (HZDS) deputy Dušan Jarjabek lashed out at the ruling parties for what he called ignoring the opposition, the daily SME wrote.

According to SME, shortly before the parliamentary elections in 1998, the HZDS took the same approach.

Moreover, the Constitutional Court found part of that legislation to be at odds with the constitution.

The abolished election moratorium and the ban on the publication of opinion polls in the preceding week could also cause problems, according to Novotný.

"Even the recommendations of the Council of Europe say that it is advisable to keep a moratorium for least 24 hours before the elections. This is important to avoid the possible spread of sensational or discrediting information about some candidates that cannot be proved in such a short time or information that otherwise could help some candidates in the race," he said.

Instead of receiving a fixed Sk60 (€1.50) per voter, those parties that gain at least 3 percent in the general election will be paid 1 percent of the nominal average monthly wage of the preceding year for each vote.

However, election ethics watchdogs, including the NGO Fair-Play, warned that parliamentarians should have restrained from doubling the state's contribution for political parties until control over the parties' pockets was increased.

If voters devolve power to parties, they must also have the right to control them, Fair-Play told the news wire SITA.

The amended act also introduces an election deposit of Sk500,000 (€12,300) to be paid by each political party running in the elections. Parties that do not reach at least 3 percent in the election will lose their deposits.

Smer's Robert Kaliňák said that the adopted changes were only minor cosmetic corrections. His party will submit its own proposal with the aspiration of revamping the whole election system.