Gašparovič: I can guarantee unity

PRESIDENTIAL candidate Ivan Gašparovič, a veteran of the Slovak political scene, started his career as a teacher at Bratislava's law school.
After serving as Czechoslovakia's attorney general after the fall of the Communist regime, Gašparovič became head of the Slovak legislature in 1992. The vice-chairman of the Movement for a Democratic Slovakia (HZDS) remained in that position until October 1998, when the first government of current PM Mikuláš Dzurinda replaced the HZDS-led coalition. 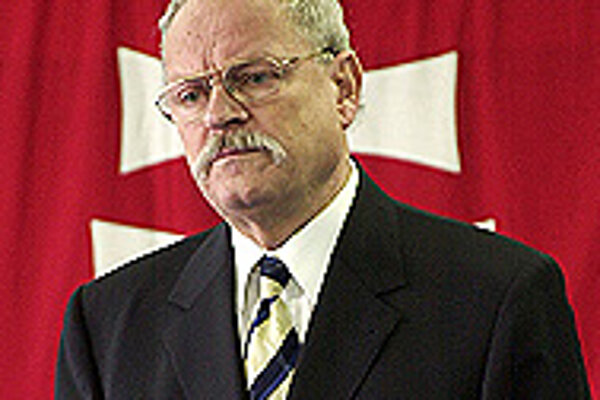 Font size:A-|A+0
PRESIDENTIAL candidate Ivan Gašparovič, a veteran of the Slovak political scene, started his career as a teacher at Bratislava's law school.

After serving as Czechoslovakia's attorney general after the fall of the Communist regime, Gašparovič became head of the Slovak legislature in 1992. The vice-chairman of the Movement for a Democratic Slovakia (HZDS) remained in that position until October 1998, when the first government of current PM Mikuláš Dzurinda replaced the HZDS-led coalition.

Under the rule of HZDS boss Vladimír Mečiar, Slovakia underwent a period of wild privatisation and the allegedly authoritarian and undemocratic methods used by his government put a stop to the country's integration into the EU and NATO.

Following the 1998 general elections, Gašparovič found himself back in parliament as an opposition MP. He decided to leave the HZDS just months before parliamentary elections in September 2002, citing a lack of democracy within the party as his reason.

Survey results released on March 8 by the Slovak Radio show him in third place in the presidential race, with his support reaching nearly 16 percent.

The Slovak Spectator (TSS): You've been out of the spotlight for a year and a half, you have not had too many public appearances, and still you have a high level of success. Why is this?

IG: It pleases me. I think over my 13 years on the Slovak political scene people have come to know me. I have not made any serious political missteps and I was not involved in privatisation, and that raises people's confidence in me.

TSS: What convinced you to run?

IG: Meetings with numerous friends of mine, who are involved in politics, even politicians from the current coalition. We analysed the situation and concluded that I should run. They figured that my results would not be negligible.

TSS: You are still rather far behind the top two candidates. Have you considered giving up your candidacy and endorsing another?

IG: That doesn't come into the question. If I gave up my candidacy I would disappoint my supporters and I cannot do that.

TSS: You are in favour of creating a strong, modern, European national bloc. Yet Žilina mayor Ján Slota, controversial for his extremist statements, supports you in the presidential race. Are his attitudes in line with those standards?

IG: Often there is something to his ideas. But he has his own way of presenting himself. Unfortunately, it is as it is.

TSS: There has so far been a lack of policy visions presented in the presidential campaign. What agenda do you plan to bring forward?

IG: There are numerous points. My basic motto for the campaign is - "I feel nationally, I think socially". I think this contradicts some of the reforms being done in Slovakia today. Reforms are necessary, but not [of this] intensity. Those who have prepared and approved them don't have an idea about their impacts. It is one huge improvisation.

TSS: Many of these reforms have already been launched, many are on the way, and the president's sphere of influence is limited. How would you address the negative aspects of reforms?

IG: The cabinet and the PM are at odds with the president. We live in a political chaos in which top state officials don't look for ways towards achieving their goals - in fact it is the exact opposite.

For the future, the top priority is for the PM, the president, and the Speaker of Parliament to be able to overcome their animosities and unite to lead the country towards the goals it has set for itself.

TSS: Let's suppose the PM and Speaker of Parliament stay the same. Will you be able to form that united force with them?

IG:Certainly, there will be no other choice. I have already been in a similar situation. In 1994, when Mečiar's government was overthrown [and replaced by the cabinet of Jozef Moravčík, which stayed in power for nine months] I acted as Speaker of Parliament although I was a member of the opposition. I have experience with such collaboration and I know I'm capable of it.

TSS: What is your position on the referendum on early elections?

IG: I have said from the start that I will participate in the referendum. The citizens have a right to decide through a referendum. It's not good to discourage people from attending. I think the president should have decided to ask the Constitutional Court whether the referendum question was in line with the constitution. Now the coalition will turn to the court if the referendum succeeds and the court has no time limit for deciding. The court could only make a good, objective decision prior to the referendum.

TSS: Will there be early elections?

IG: The opposition is also not united. Thanks to that, this government could stay in place for a very long time. The HZDS is keeping watch so that the government doesn't fall. Just look at the latest statements of [former] PM Mečiar. Before, he declared that he would not ask for ministers to be recalled unless there were enough votes to make sure that the proposal passed. Now, Mečiar seemingly wants to recall [Finance Minister Ivan] Mikloš, although he knows for certain that he doesn't have enough votes. And to make sure that Mikloš is not recalled, he has proposed that the voting be public, because there are coalition MPs who want to see Mikloš out and if the voting were secret it just might happen that they would support the proposal.

TSS: If Mečiar is elected, will it harm Slovakia's image abroad?

IG: Certainly. If we look at the reactions to his candidacy from abroad and if you take his legacy, he would not be a respected president.

TSS: Under Mečiar you were Speaker of Parliament and share responsibility for the developments during that time. How is it that you have managed to exculpate yourself from that responsibility and have become an acceptable candidate in contrast to Mečiar?

IG: It's not about exculpation. Over those 13 years that I spent in politics and was in the HZDS together with Mečiar I participated in the early successes, but also the problems that the HZDS had, so to a certain extent I feel my responsibility for the developments. However, I was never one to fully accept the decisions and orders of the party's chairman. And I have often presented that in public.

TSS: What do you see as the biggest mistakes of the era of Mečiar's rule?

IG: In the early years of independence the HZDS took decisive and beneficial steps. Slovakia is an independent and sovereign state accepted by the whole world. I never denied Mečiar's role in that. But then we, the HZDS, turned into a wagon hurtling down the tracks, not respecting the green light, the red light, the left, or the right turns. We went without using the breaks and we did not take into account some warnings that we should have in relation to the international community.

TSS: Were you aware of those mistakes at the time, or are they evident only in retrospect?

IG: Even then. But I believed the HZDS to be a strong and united party and it was essential to keep it together. I'm convinced that if the party's leadership had changed at the critical time or if the leader of the HZDS accepted that we couldn't do everything based on his ideas and his decisions, the HZDS would still be forming the government and it would be the strongest political party.

I always believed that I, along with others, could convince him [Mečiar] and he would change. That we could change his directive manner by pointing out the worsening results. We failed.

TSS: You were perhaps the only top representative to publicly say that the results of the referendum on EU entry may have been manipulated. Do you still feel the same?

IG: What I said was that it was possible to manipulate the results. I did not say that the referendum was manipulated.

TSS: So you just mentioned it as a possibility?

IG: I can't say that it didn't happen, because anything is possible. I myself tried to convince people before the referendum that we had to participate. Although even back then I warned that we didn't know what it would bring for Slovakia. I didn't doubt our need to enter the union. Today, I could already present some objections.

IG: Our negotiators didn't do their job. And the EU is not treating the acceding countries as equals. It's becoming evident that strong states such as France or Germany can get away with breaking EU rules.

TSS: Should small states have a greater say?

IG: It should not be the case that Slovaks do not have the same rights as Poles, just because there are 5 million Slovaks and 30 million Poles. Those who represent Slovakia will have to make sure that this is not the end for Slovakia, that the Slovak identity is preserved.