Bútora: My past is flawless

WITH only a 3.4 percent of the public's support, Martin Bútora is one of the less probable winners of the presidential elections. Although a civil candidate, he was hoping to get the endorsement of the Hungarian Coalition Party. The Béla Bugár-led party, however, has recently decided to support the official candidate of the Christian Democrats, František Mikloško.
Following the Soviet occupation he was persecuted by the communist regime. For 11 years he worked as a therapist at a rehabilitation centre for alcoholics. 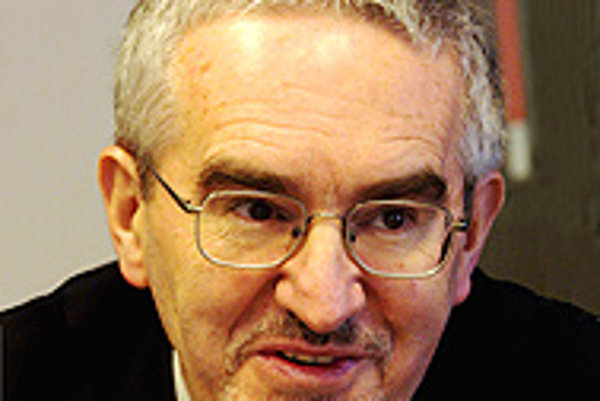 Font size:A-|A+0
WITH only a 3.4 percent of the public's support, Martin Bútora is one of the less probable winners of the presidential elections. Although a civil candidate, he was hoping to get the endorsement of the Hungarian Coalition Party. The Béla Bugár-led party, however, has recently decided to support the official candidate of the Christian Democrats, František Mikloško.

Following the Soviet occupation he was persecuted by the communist regime. For 11 years he worked as a therapist at a rehabilitation centre for alcoholics.

After the 1989 Velvet Revolution he was a cofounder of the Public Against Violence political party. The years 1990 - 1992 saw him as advisor to Czechoslovak president Václav Havel. In 1997 he founded the independent Institute for Public Affairs, and became its president.

Between 1999 and 2003, Martin Bútora represented his country in the United States as Slovak Ambassador to Washington. Last year he and his wife returned to Slovakia, and this year - following months of hesitation - he has decided to run for the top post of the country.

The Slovak Spectator (TSS): What makes you a different candidate? What is it that you can offer voters?

Martin Bútora (MB): There are many candidates. Let me just consider some of them. To a great extent, my political past is different from that of, say, Mr [Ivan] Gašparovič or Mr [Vladimír] Mečiar. Let me put it simply: I have always held different views on the future of Slovakia. They are politicians who were responsible for Slovakia being left out of the Euro-Atlantic expansion. They helped put democracy in jeopardy in Slovakia.

I have never been a member of the communist party. Some of the other presidential candidates - for example Eduard Kukan or Rudolf Schuster - cannot claim the same.

TSS: Since you have begun with comparisons, how would you respond if you were to compare yourself with the current president, Mr Schuster?

MB: My positions are clearer and more easily understandable. Sometimes I fail to understand the moves of the current president. One day he is a Catholic, on another a communist; once he is pro-government, then suddenly he supports the opposition - he blows hot and cold. I think he has failed the task I consider to be his priority, namely, safeguarding democracy.

The reasoning behind his decision to hold presidential elections and the referendum on early elections is also clear. Anyone can see that one of the reasons was the very fact that he is running for re-election. I believe that Slovakia has to overcome provincialism, and in this regard, my way of thinking is different from those of my contenders.

The main difference between me and the other candidates is that there is not one particular lobby group or ideological movement standing by me. I have not committed myself to one political party, like in the case of most of these candidates. I also have a different understanding of Europe. As opposed to the Christian Democrats, I do not look at the European Union from a defensive position, rather, I see it as a chance for the country.

TSS: You have mentioned Eduard Kukan and Rudolf Schuster. How significant do you think a candidate's communist past, or the lack of it, is when running for this post?

MB: I don't want to get into some kind of witch-hunt, but I think that the post of the president is one where the past of a person is not unimportant. In my opinion, the moral integrity, rather then utilitarianism, of the president is important. It is not easy to overlook or forget these kinds of things. The current president, however, tends to insist that everything that happened [during communism] was right, that he has nothing to be ashamed of, and that he never participated in anything sinful. I think that there were political and personal misdeeds at that time. However, I have never noticed any kind of remorse from this candidate.

What are the characteristics that the future president should have? It is also a role of enormous moral authority, for someone who can address people, who is able to put forward important topics, who can become a significant communicator with the simple people of the Spiš or Zemplín region. In 1998 and 2002, Slovak citizens proved that when it comes to the final decision, they can manifest wisdom.

TSS: What would you pledge to do as President?

MB: To name just a few things, I would promote human rights issues, equal opportunities for men and women, and I would draw attention to the importance of establishing an open society. I have the ability to inspire, encourage, and motivate people. This is what both the country and its inhabitants need: We have to look at ourselves in a different way, to be more self-conscious. We have to look at the bottle as half-full, not half-empty.

TSS: During times of hard-to-swallow social reforms when life has become difficult for a large portion of the population, one would expect voters to choose a harsh, snappier kind of politician. You are not this kind of person...

MB: What you have just mentioned would be true in the case of an emergency. But I believe that when it comes to voting, it will not only be the feeling of insecurity that will influence citizens' decisions. On the other hand, for me the economic reforms are not something that could not be changed, or at least better explained to the people. They should understand the reasoning behind these painful reforms.

TSS: I know that it is a bit of an abrupt parallelism, but how would you compare the ongoing presidential campaigns in the United States and in Slovakia? Are there any similar features between the two fights?

MB: It is a very interesting question. While in the US, we followed the unfolding elections with mesmerising interest. With a smile on my face, I was telling my American friends that we in Slovakia would have managed to count those votes in no time, and more efficiently. Thank God for the eastern-European skilfulness and discipline - all our elections have been carried out without any problems. When I was describing our election system, many Americans seemed to be jealous of it.

We have to get used to the fact that democratic politicians in Slovakia - just like in the United States - talk openly about their differences and highlight their political profile. We, the candidates for the presidency, are offering this country a possibility to choose. Unlike in the previous presidential elections, it does not have to be the choice of the lesser evil. What we do lack, compared to the States, is a vivid social dialogue.

TSS: You spent a lot of time helping alcoholics. What have you learned and to what extent can those 11 years contribute to your campaign and possible presidency?

MB: Many of my friends make fun of my 11-year-long "tapering-off cure", but it was a very interesting and important period of my life. I gained a lot from it. I believe that no real change is possible without humility. I try to exercise modesty myself. I had seen a lot of people in the depths of despair, yet they managed to pull themselves together. I admire the ability to pull yourself back together. This is what I learned, to be able re-collect myself and to find solid ground again. I think that Slovakia can use this ability too.