"WE ARE concerned with the lack of tolerance in Slovakia today. Those who express views that are contrary to those of the government are often described as anti-Slovak or unpatriotic only because they do not agree with government policy and say so," said former US Ambassador Ralph Johnson. He was explaining, back in July 1997, why the US would not support Slovak membership to the North Atlantic Treaty Organization. 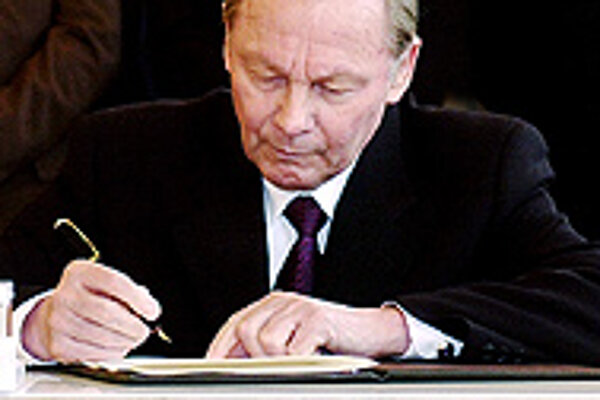 Font size:A-|A+0
"WE ARE concerned with the lack of tolerance in Slovakia today. Those who express views that are contrary to those of the government are often described as anti-Slovak or unpatriotic only because they do not agree with government policy and say so," said former US Ambassador Ralph Johnson. He was explaining, back in July 1997, why the US would not support Slovak membership to the North Atlantic Treaty Organization.

Former US ambassador Johnson's words show just how far Slovak integration into NATO has come in the past few years. US hesitation has completely evaporated. At the beginning of April, less than six years after initial rejection, Slovakia will now become a full member of NATO.

On April 2, foreign minister Eduard Kukan will take part in the official ceremony at NATO headquarters in Brussels. The Slovak flag, together with those of the six other new members: Bulgaria, Estonia, Lithuania, Latvia, Romania, and Slovenia, will be raised.

For Igor Slobodnik, Slovakia's ambassador to NATO, there will, however, be no radical change: "We'll become a permanent delegation rather than a mission. Practically, we've already been participating in the NATO work as consultative partners in almost all NATO bodies. Now we'll be a decision-making ally."

From the first day of independence on January 1, 1993, Slovak soldiers have served in UN peacekeeping operations, for example in Somalia, the Balkans, Angola, and Rwanda. And support for NATO still runs high today despite Slovakia's Iraq escapade.

Last December, a poll conducted by the UVVM public opinion researchers put support for the country's entry to NATO at almost 55 percent, up two percentage points on September. The poll indicated that 23 percent of respondents "definitely" support, and 32 percent are "more for than against" NATO membership. Around 41 percent oppose NATO.

Currently more than 750 Slovak soldiers are deployed worldwide for military observation missions to humanitarian assistance, mine clearing, and general peacekeeping operations. Around 100 Slovak soldiers are serving in Iraq, mainly assisting in mine clearance. Recent hotspots also include Afghanistan, Bosnia and Herzegovina, Moldavia, and East Timor.

But are Slovak missions related to the security needs of the country? Is the eastern border not more a threat?

"Border control is not a matter for the defence ministry or for NATO," said Slobodník.

"Of course it is important but that is not our business - it is something for the EU and the Slovak interior ministry."

The country's NATO ambassador thinks there is little risk of a continent-wide conflict in Europe: "There are new threats as we saw on September 11 in the US or in the Madrid attack. No nation can ignore the fact that it could be a target for terrorists."

How will Slovakia benefit from NATO?

He also stressed the benefits of collective defence for Slovakia. "That allows us also to maintain a relatively small but efficient army."

Currently, Slovakia has around 23,000 members of the armed forces, including civilian employees, down from 50,000 in the early 1990s. "NATO is changing to a much more rapid and forward-defence strategy. We'll be part of that."

When describing the benefits NATO will receive from Slovak membership, Slobodník points to the 'niche' capabilities that the army has developed: the chemical, biological, radiological, and nuclear protection of troops, military police, and engineering units.

"Such niche capabilities are now in high demand and will be integrated into the overall NATO defence structure, perhaps from 2005 or 2006."

According to Slobodník there is no need for Slovakia as a member of NATO to buy American when it comes to weapons.

"No. That's definitely not on our minds. We are not looking at a major modernisation of our armed forces in the next five years. On the contrary, we're trying to get rid of some material," he said.

"There are no special material requirements in NATO. We still use Soviet-made defence systems, for instance, in the Balkans and Afghanistan." Slovakia has retained 29 MIG aircrafts for home air policing and will not be expected to contribute to NATO air missions.

Budgetary acrobatics were needed, adding income from Soviet debt repayments to the 1.81 percent of GDP originally earmarked in the draft budget for 2004. "This year, as every year since 2001, there is the figure of 2 percent and I hope that will continue," said Slobodník.

"Maintaining that figure over the next years is essential and will add stability to the financial framework. The defence ministry will then be able to plan better. GDP growth is more or less predictable." Fortunately, landlocked Slovakia does not need to spend on a costly navy.

With all this spending to keep up with NATO demands, will Slovakia support an EU defence policy?

"Yes, but it will not duplicate or contradict the basic role of NATO," said ambassador Slobodník.

Does he see a European army protecting Slovakia in the future?

"No. It is a question of institutions, political will, and material assets. Why invent something when we have an instrument - NATO - that has proved itself in the past 55 years? It is a very successful organisation. We need to keep the US in, and to broaden the scope of NATO. We need to enlarge the zone of stability around Slovakia."

With such a policy towards EU defence, is Slovakia not in danger of being seen as blindly supporting the US?

"We're not a Trojan horse for the US in the EU. All the EU newcomers will have to work hard to convince older members that this is not the case. This stereotype, and the slightly derogatory behaviour by some EU leaders, will be overcome by working together."

According to Slobodník, the vote of every nation counts in NATO decision-making, as does the veto each wields. "The US takes allies into account when making NATO policy. No member has contemplated withdrawing because NATO is too dominated by the US. In such a political-military organisation it is important to have strong leadership and the US plays an indispensable role."