Juggler aims for his skyscraper

ALMOST every day after work, Milan Roskopf can be seen running up the 31 storeys of the Pressburgercentrum while juggling three, one-kilo balls and carrying 20 kilos on his shoulders. Repeating the whole procedure three times in a row, he is preparing to conquer the 103 floors of the world's second tallest building, the Sears Tower in Chicago, USA.
"It's my life-long dream to climb something really high," said Roskopf, who has been training for the stunt for almost a year. 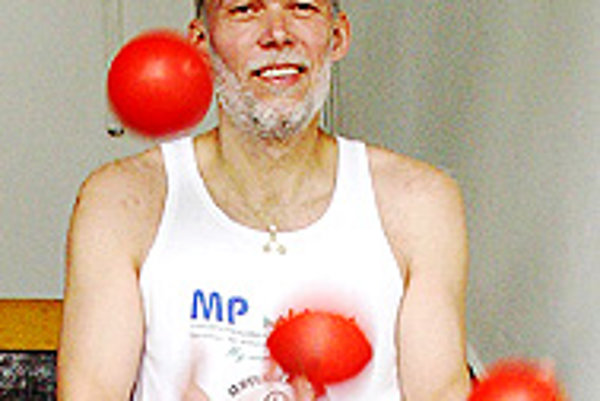 Font size:A-|A+  Comments disabled
ALMOST every day after work, Milan Roskopf can be seen running up the 31 storeys of the Pressburgercentrum while juggling three, one-kilo balls and carrying 20 kilos on his shoulders. Repeating the whole procedure three times in a row, he is preparing to conquer the 103 floors of the world's second tallest building, the Sears Tower in Chicago, USA.

"It's my life-long dream to climb something really high," said Roskopf, who has been training for the stunt for almost a year.

The 44-year-old juggler first revealed his plan to climb a skyscraper in June 2003, after conquering the 105-metre Pressburgercentrum in Bratislava in 6 minutes and 17 seconds. The initial idea to juggle while running upwards came when cyclist Tomáš Laermann hopped up the Pressburgercentrum stairs a month earlier.

Roskopf knows that his American dream might not work out, as his earlier application to climb the Empire State Building during the Fleet Empire State Building Run Up competition on February 3 was refused. The building's management did not approve it because of the increased security in the building since September 11, 2001. Moreover, American skyscrapers are solicited by all kinds of people with stunts in mind. He is prepared for the failure of his plan, for which he is promised the support of various firms and individuals, including the country's prime minister, but he does not give up.

"If it doesn't work out [with the Sears Tower], I will certainly do something else there, even if it's only going to be a performance in [New York's] Central Park. Then, on returning home I will search for a building here in Europe," said Roskopf, who has been devoted to juggling for tens of years and longs to cap his career in America.

The date he has chosen for conquering the Sears Tower is March 27, the day of his 45th birthday. His flight to the US, to a New York's airport was scheduled for Sunday, March 21.

Being the chairman of the Slovak League of Strength-Endurance Juggling, which registers around one hundred members from all around Slovakia, his main aim behind the trip is the worldwide promotion of strength-endurance juggling, which he initiated in Slovakia several years ago.

"Nowhere else in the world is there a contest in such a discipline but here. Also, all records as well as entries in the Guinness Book of Records in this sport are held by Slovaks," he said.

Roskopf himself is a holder of 25 world records and 13 entries in the Guinness Book of Records, 12 of them waiting to be officially certified. The one certified entry is for juggling with 7.25-kilo shot putts for 52.05 seconds. Other records include juggling with 8.5-kilogram balls for 39.5 seconds, juggling 5-kilo balls whilst running 100 metres in 24 seconds and using one-kilo balls in the 1999 Bratislava - Heinburg half-marathon.

A former basketball player and marathon runner, the 204-centimetre Roskopf, started juggling at nine. From ordinary little balls he later switched to cricket balls, then to tiles. Later he discovered that juggling could take another direction; from the entertaining aspect it could turn into strength-endurance exercise. At the end of the 1990s he began juggling with one-kilo balls, specially cast for him in bronze. Gradually increasing the weight, the heaviest balls he has juggled to date were 10 kilos each.

His nickname, The Man with Three Balls, indicates that he has stayed faithful to throwing three balls in the air. As he says, it rarely happens that a ball drops on the floor, because the reflex to catch it is quicker than the ball. Moreover, he trains with the heavy ones while standing on his bed at home, or over a mattress in a gym.

Roskopf works as a sport referee at the municipal office in Bratislava's Rača district, where he also coaches children and adults in the art of juggling. He has trained up to a hundred children and one of his protégées, 14-year-old Marek Slíž, who often accompanies him during performances, is so good that he is the highlight of each show. "That boy can juggle with anything he grabs in his hands."

Apart from his young students, Roskopf also has adult followers. Last year his record for 3-kilo ball juggling was broken by Ľubomír Majstrák and another juggler catching on is Milan Šunderlík. The sport has also attracted such sportsmen as the Austrian skier Hermann Maier and Czech javelin thrower Jan Železný. Former Slovak wrestling champion Jozef Lohyňa is also on the list.

Consider the scenario that Roskopf is allowed to climb the 110-floor, 443-metre Sears Tower up to its 103rd floor, a feat he expects to do in 25.5 minutes. He will climb 2,060 stairs, 200 more than those he has been recently training on at the Pressburgercentrum in Bratislava.

"There's not yet a building in the world that I could not climb while juggling," Roskopf said.

Where to see Roskopf in Bratislava?
Rača Juggling Club is based at Račianska 51, but they also use Základná škola at Sibírska 39 (Nové Mesto district).
On the last weekend in April, Roskopf and his students will participate in the First International Festival of Jugglers and Magicians in Šaľa, and on May 1 they will hold a juggling marathon during Rača Fest.