Grossmann opens window to his home

PHOTOGRAPHER Igor Grossmann, born between the two world wars in 1924, grew up in the northern Slovak town of Žilina. He later moved to the nearby rural town of Rajec surrounded by hills and fields, where he got a job as a pharmacist.
"I suddenly found myself in the centre of an ethnographic happening. I was astonished to see people wearing folk costumes, working in fields, and old grannies going to church. 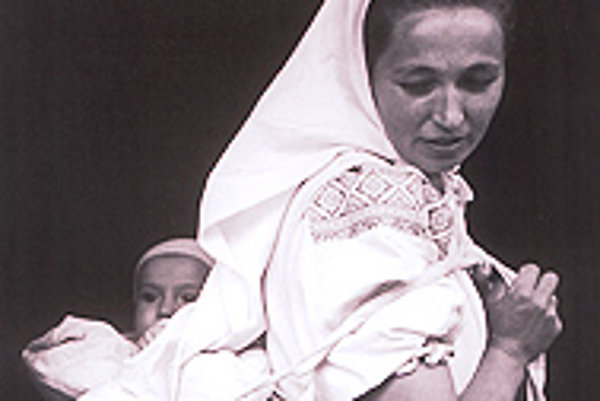 Font size:A-|A+  Comments disabled
PHOTOGRAPHER Igor Grossmann, born between the two world wars in 1924, grew up in the northern Slovak town of Žilina. He later moved to the nearby rural town of Rajec surrounded by hills and fields, where he got a job as a pharmacist.

"I suddenly found myself in the centre of an ethnographic happening. I was astonished to see people wearing folk costumes, working in fields, and old grannies going to church. Since I had been taking amateur photographs before, I started shooting these scenes," Grossmann said.

Celebrating his 80th birthday, the photographer opened his third exhibition this year on March 18, the day this edition of The Slovak Spectator went to print. Run by the Bratislava City Gallery at the Mirbach Palace, the display offers around 50 enlarged black-and-white photographs that Grossmann took between 1953 and 1970. Entitled The Window of Home, they offer a view of the bygone atmosphere of the Slovak countryside.

"The photographs are quiet but communicating at the same time - ordinary, even banal, but one can hear a beauty speaking from them. They look back 30, 50 years and are memories, which will always be rare to us," said the exhibition's curator Rudolf Lendel, a photographer himself.

Grossmann started to devote his time to photography professionally from 1966. After documenting the vanishing life of the Slovak mountain village, he enlarged his portfolio to include a wide range of styles from advertising, industry, fashion, and report photography to abstract works. His early work reflects the viewpoint of that time and his way of photographing is similar to that of his contemporaries, such as the renowned photographer Martin Martinček.

The Window of Home exhibition is a continuation of the display-book project, born some 15 years ago when Grossmann's daughter came to him and asked him to pull these ethnographic pictures out of his archives. He brought them out and enlarged some of them which resulted in the book, Obrazy odviate časom (Images Gone With Time) in Slovakia and in America, as well as starting a series of exhibitions originating in his hometown of Žilina and continuing through Martin to Bratislava. The current exhibition at Mirbach Palace displays five photographs from the book and the rest are new additions.

"[The photographs] for me are memories of those times. They also point to my Slovak roots, my home," said Grossmann, adding that the message they bear is universal and can address any modern person who looks deep enough.

"There were 1,000 copies of that book printed in America [by Bolchazy-Carducci Publishers, Inc.- ed. note], but only 400 in Slovakia. Americans have identified with my work; one American may originate from, lets say Italy, and another from Germany, and they are the second or third generation living in the USA. They told me that my work speaks to them in the way that it brings them the feeling of a home they have somewhere," he said.

Grossmann's early and highly praised work, displayed at the Mirbach Palace, can be compared with his latest abstract and colour pictures, shown at the Zichy Palace until March 28, and which have earned some criticism.

"Some 20 years ago I was exhibiting a mix of my work - there were pictures from France, some abstract photographs of glass, and ethnographic works. According to their reactions, the visitors put themselves into different groups - some were cosmopolitans, others were interested in the abstract work, and the last group was touched by pictures of their homeland.

"[Currently] some photographers who come to see my abstract work at Zichy Palace say, 'this is not a photograph, a photograph is a documenting work - this is a painting.' On the other hand, when painters come they say, 'Oh, finally a photograph that shows it can also be art'. So, with many people, many thoughts. As we like to say: 'two Slovaks, three opinions'," he said.