Race off to a quiet start

ELEVEN men officially entered the presidential race on March 19, the day when the campaign for Slovakia's second direct elections started.
For the first time in the history of such elections, candidates will be able to run ads in the private electronic media - not only on the public Slovak Radio and Slovak Television.
The campaign will end 48 hours ahead of the vote on April 3. 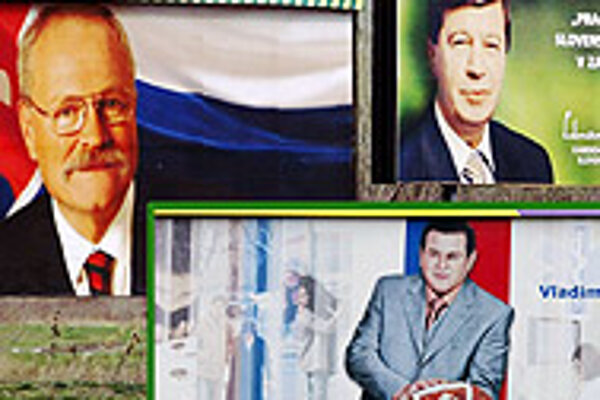 For the first time in the history of such elections, candidates will be able to run ads in the private electronic media - not only on the public Slovak Radio and Slovak Television.

The campaign will end 48 hours ahead of the vote on April 3.

"Few people actually noticed that the campaign started four days ago. None of the candidates brings any vision, and no exceptional themes are being discussed that would specifically characterise this year's presidential elections," Vašečka added.

Ľuboš Kubín, political analyst with the Slovak Academy of Sciences said, however, that perhaps the one candidate who has a distinct theme is the incumbent, Rudolf Schuster, who "has been cultivating himself in the eyes of the voters as the one who cares about social well-being through his opposition to the ruling parties."

Analysts are convinced that none of the candidates will succeed in the first round of the elections and that the new president will be picked in the second round, on April 17.

"The [voter support] polls show clearly that there is no candidate who would have a majority support of voters and it is not likely that anything will change about this. The new Slovak president will be picked in the second round," said Kubín.

Posters and large-scale billboards have already appeared around the country, as have ads in print and electronic media. All of the 11 men running for the top post have started travelling across the country to meet voters.

According to the opinion polls, Eduard Kukan, Slovakia's foreign minister and member of the ruling Slovak Democratic and Christian Union, and Vladimír Mečiar, the country's three-time ex-PM who leads the opposition party Movement for a Democratic Slovakia (HZDS), are the hottest candidates for the head of state post.

Of the two, Kukan has recently faced criticism over his alleged cooperation with the secret service ŠtB during communism. Kukan studied at the Moscow-based institute for international relations between 1958 and 1964. The Slovak daily SME reported the allegations were based on a recent anonymous letter that was signed "a classmate".

Kukan denied the information and said on March 19 that he considered it a strategic part of the presidential race.

"The next time, they will write that when I was 12 I shot a pigeon with an air rifle or that I tortured a puppy and therefore turn the Animal Freedom [a local animal rights group] against me," he said.

According to analysts, even if it were proven that Kukan did work with the ŠtB, it would probably do little to change his voter support.

"Information of this kind will not have any major impact on Kukan's supporters or even the supporters of other candidates in the event of similar allegations. Slovak voters, unfortunately, are not particularly sensitive to the candidates' possible communist pasts," said Kubín.

Mečiar, meanwhile, is widely remembered as a politician whose 1994 - 1998 government led the central European state into international isolation. The election term also saw several other controversial events, including a thwarted referendum on NATO entry and the kidnapping of the president's son, Michal Kováč Jr. The case remains unresolved thanks to amnesty granted by Mečiar at the end of the election term when he was Slovakia's acting president.

Vašečka and Kubín agreed that Mečiar is less of a controversial figure these days and that many voters have forgotten about his excesses in power. But they said that, should Mečiar make it to the second round of the presidential race, as is expected, his chances would be slim.

"Mečiar is still a problematic figure and, should he become president, politicians are aware that he would try to interfere with politics even though the Slovak president has limited powers," Kubín said.

"Even those who do not like Mečiar as a politician admit that he is a strong personality who has leadership skills. But Mečiar's problem as a politician is still the fact that he only stirs emotions of either uncritical love or hate," said Vašečka.

President Schuster, who is the next most popular candidate according to polls, has said recently that he would not organise any campaign because he did not want to neglect his presidential duties. He will not have billboards and he will only meet with people during his regular presidential visits.

Finally, the fourth most popular candidate according to opinion polls is Ivan Gašparovič, a former member of Mečiar's HZDS who was the speaker of parliament under the 1994 - 1998 Mečiar cabinet. Smer, the biggest opposition party, supports him.

The latest surveys show that about 70 percent of voters plan to participate in the presidential elections and that about 15 percent are still undecided about who they want to vote for.

According to analysts, these voters often make their decisions at the last moment and many decide according to whom they believe the majority will vote for.

"The undecided voters usually choose who they think the expected winner will be," said Kubín.

Vašečka believes that the current two strongest candidates, Mečiar and Kukan, will most likely meet in the second round and that the remaining candidates have only a slight chance of experiencing a surprise increase in voter support.

"Although some of the candidates still do have the potential for a growth in support, especially Gašparovič, it is not very likely that any of them will beat Kukan and Mečiar. The two will probably meet in the second round," said Vašečka.

WHO ARE THE PRESIDENTIAL CANDIDATES?

* Eduard Kukan
Born on December 26, 1939. He studied at the Moscow state institute of international relations and worked in the diplomatic service under communism. From 1960 until 1989 he was a member of the communist party. After the fall of communism he continued working as a diplomat and in 1994 served a short term as the Slovak foreign minister. He took up the post again in 1998 and continues to hold it. He is a member of the Slovak Democratic and Christian Union.

* Jozef Kalman
Born on April 18, 1951. Between 1994 and 1998 he was a member of the Slovak Workers Union that was part of the Vladimír Mečiar government, and in 1998 he entered Mečiar's Movement for a Democratic Slovakia party (HZDS). He left the HZDS in 2002 to start his own Left Bloc.

* Vladimír Mečiar
Born on July 26, 1942. He studied law and was a member of the communist party between 1962 and 1970. He entered active politics after the fall of communism and served three times as Slovakia's PM. He has led the Movement for a Democratic Slovakia (HZDS) since the party was founded in 1991. He ran for the head of state post in 1999 but lost in the second round to Rudolf Schuster.

* František Mikloško
Born on June 2, 1947. He studied mathematics and was a Christian activist between 1968 and 1989. After the fall of communism he entered the Christian Democratic Movement (KDH), of which he is still a member.

* Ivan Gašparovič
Born on March 27, 1941. He worked as a prosecutor after finishing his university studies. He entered the HZDS in 1992 and remained in the party until 2002 when he left to found his own party, the Movement for Democracy. He served as speaker of Slovak parliament from 1992 to 1998.

* Rudolf Schuster
Born on January 4, 1934. He graduated in construction engineering. He became mayor of Košice for the first time in 1983, and served again after the fall of communism. He was a member of the communist party between 1964 and 1990 and was elected president in 1999.

* Martin Bútora
Born on October 7, 1944. He studied sociology and worked as a therapist at an alcoholic rehabilitation clinic. He co-founded the country's first post-communism party, Public against Violence, in 1989 and was an advisor to Czechoslovak President Václav Havel between 1990 and 1992. He founded the Institute for Public Affairs think-tank in 1997 and between 1999 and 2003 he was Slovakia's ambassador to Washington.

* Jozef Šesták
Born on November 9, 1945. He studied foreign trade and, in 1970 he started working at the Czechoslovak embassy in Washington. Later he worked at the embassy in Vienna. Between 1991 and 1994, after the fall of communism, he was a businessman and then worked at the Slovak Foreign Ministry under the 1994 - 1998 Vladimír Mečiar government. He was a member of the communist party and later the HZDS. Currently he is not a member of any party.

* Ján Králik
Born on May 30, 1949. He studied economy and worked at the Technical University in Bratislava and later filled management positions in a central Slovak machinery firm. He was a member of the communist party. After the fall of communism he entered politics and was a member of the reformed communist Democratic Left party. Since 1998 he has been the mayor of Banská Bystrica.

* Stanislav Bernát
Born on July 26, 1949. He studied construction maintenance at a university in Žilina and later worked in the business sphere and then for a Martin theatre. In 1994 he was elected the mayor of Martin, a post he currently holds.

* Július Kubík
Born on May 3, 1940. He studied mechanics in Žilina and in 1968 fled to Switzerland with his family to escape communist prosecution. He served as the president of the Slovak-Swiss friendship club and he is a member of the Confederation of Slovak Political Prisoners. He has dual Swiss and Slovak citizenship.