THE SECRET group working against the interests of the intelligence service and the state is more a matter of fiction than fact, according to investigators. The results of that query are a part of what appears to be a partial reinvigoration of the skupinka, or group, affair. 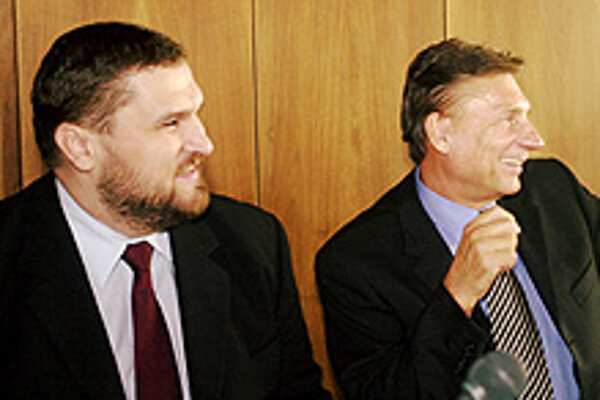 Font size:A-|A+0
THE SECRET group working against the interests of the intelligence service and the state is more a matter of fiction than fact, according to investigators. The results of that query are a part of what appears to be a partial reinvigoration of the skupinka, or group, affair.

Prime Minister Mikuláš Dzurinda announced at a press conference on August 5, 2003 that he had information about the operations of an interest group working to discredit the Slovak Intelligence Service (SIS) and his Slovak Democratic and Christian Union (SDKÚ) party.

Later in August Dzurinda testified about his suspicions, citing confidential information provided to him by the SIS, leading investigators to launch an inquiry. A transcript of that testimony, the accuracy of which has been confirmed by prosecutors, was later leaked and appeared on the internet and in various media.

Dzurinda had implicated Ján Mojžiš, at the time the boss of the National Security Office (NBÚ), and entrepreneur Miloš Žiak, the head of the Israeli chamber of commerce in Slovakia, as members of the lobby group striving to promote its business and power interests.

The group is said to have as many as 36 members, including prominent journalists, entrepreneurs, and analysts.

It now seems Dzurinda may have had his facts wrong.

"The PM's group is nonexistent," Attorney General Dobroslav Trnka said at a press conference on March 24, the day after all major Slovak media reported the news.

Dzurinda himself seems unconvinced by the findings.

"What do we want in Slovakia?" he asked journalists in reaction to the recent developments via a teleconference from Madrid, where he is on a state visit.

"Do we want interest groups to prosper? Do we want the head of an institution such as the NBÚ to abuse his official stamp and lobby in favour of a particular company? Do we want such unconstrained cronyism to flourish here?" Dzurinda asked.

"It is thanks to my actions that the aggressive campaign against the SIS has ceased and there is now calm. The NBÚ is doing its job in line with the law and not according to the wishes of some thieves," he added.

In the run-up to the "group" scandal, the British Jane's Intelligence Digest (JID) published numerous reports about the shady activities of the SIS. Some insiders suggested that Mojžiš, who had worked as the SIS chief analyst before taking the job at the NBÚ, might have been among the sources for those stories.

Dzurinda has suggested that the group's intention was to discredit the agency's leadership and force SIS boss Ladislav Pittner, a nominee of the PM's SDKÚ party, out of his seat to gain control of the intelligence service.

Although investigators have dismissed the notion of this group functioning in Slovakia, proceedings concerning the "attack on a state body" by JID continue. Its results are to be released in the upcoming days, according to chief prosecutor Trnka.

Dzurinda also accused Mojžiš, responsible for probing the reliability of firms and individuals that work with confidential information, of trying to influence the outcome of some large-scale public procurement deals.

The PM's conspiracy theory triggered a domino effect that has changed the core of the Slovak political landscape and may yet prove to be fatal for Dzurinda's own political career.

In September 2003, Dzurinda asked the cabinet to withdraw Mojžiš from his position. The ruling Hungarian Coalition Party (SMK) and Christian Democratic Movement (KDH) decided not to support his motion, primarily citing a lack of evidence for Dzurinda's claim.

The defence minister at the time, Ivan Šimko, also vice-chairman and co-founder of Dzurinda's own SDKÚ party, refused to obey party orders and, together with the SMK and KDH, helped Mojžiš survive Dzurinda's first attempt to fire him.

Outraged, Dzurinda immediately kicked Šimko out of the cabinet and had him stripped of his SDKÚ vice-chairmanship. Šimko later left the SDKÚ, along with other dissatisfied members, and now heads the opposition Free Forum (SF).

After Šimko was replaced, Dzurinda finally got his way and Mojžiš was ousted from office to later be replaced by current head Aurel Ugor.

The departure of Šimko and his followers meant a loss of majority for the ruling coalition, which now survives on a vote-to-vote basis. The KDH and SMK have declared that the only long-term solution is to offer the SF a seat in government and make it a part of the coalition, something Dzurinda has been reluctant to agree to.

For his part, Šimko says the SF will not enter any cabinet headed by Dzurinda, who has "deviated from the values" with which the two men launched the SDKÚ.

"The results [of the investigation] have not surprised me," Šimko told The Slovak Spectator, adding that, "the PM should do what is expected in a normal democracy."

Moreover, voter support for Dzurinda's SDKÚ, once the strongest coalition party, has plummeted since the outbreak of the scandal. According to a survey conducted by the Focus agency, as many as 10.9 percent of voters supported the SDKÚ in July 2003.

The results of a study performed by the Statistics Office, released on March 16, indicate that only 7.4 percent of Slovaks would now vote for the party.

Dzurinda claims that this is in part due to the media pressure he has had to face after most major media released reports that he illegally obtained sensitive personal files on Mojžiš from the SIS.

On this front, too, the group case remains open. Dzurinda has sued the dailies SME and Pravda for libel, demanding Sk5 million (€123,000) in reimbursements for their reports and commentaries.

"The statements are obviously false and their intention was to discredit Mikuláš Dzurinda," reads part of the complaint submitted by the PM's lawyer.

Representatives of both media sources were outraged.

"I'm convinced that we'll be able to defend everything we wrote," Petr Šabata, editor-in-chief of Pravda, told the TA3 news channel.

"Something like this would never happen in a civilised political environment," he said.