WINDOWS without frames and smooth, large, and clear one-piece panels characterise the minimalist tendencies perfected by Swiss architects, such as the world-renowned duo Herzog & de Meuron. The architects have significantly enriched their medium not only at home, but also abroad, one example being the new Tate Gallery of Modern Art in London. 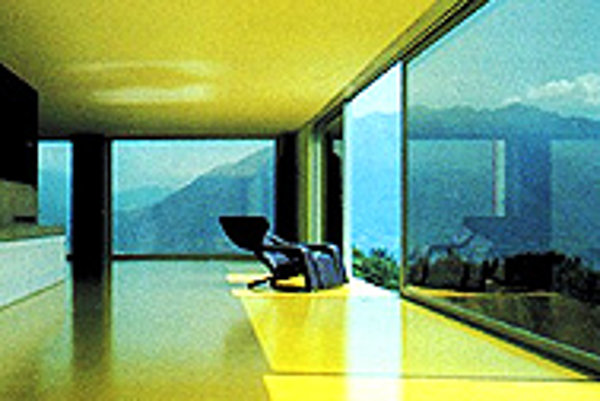 Font size:A-|A+  Comments disabled
WINDOWS without frames and smooth, large, and clear one-piece panels characterise the minimalist tendencies perfected by Swiss architects, such as the world-renowned duo Herzog & de Meuron. The architects have significantly enriched their medium not only at home, but also abroad, one example being the new Tate Gallery of Modern Art in London.

The Herzog & de Meuron tandem is one of the features of the exhibition entitled A Matter of Art: Contemporary Architecture in Switzerland. It opened at the Grand Hall of the Culture Ministry at SNP Square 33 in Bratislava on March 23 and will run until May 2.

Organised in cooperation with Pro Helvetia Bratislava and the Slovak National Gallery (SNG), the exhibition presents 16 buildings constructed between 1997 and 2000. They are representative works of contemporary Swiss architecture, which is interesting for "its specific understanding of architecture as an art form". The works were selected under the supervision of Jacques Lucan from the Federal Polytechnic School in Lausanne and first exhibited at the Swiss Cultural Centre in Paris in 2001. Since then the exhibition has travelled to many countries, recently stopping in Prague and Krakow.

"The show has enjoyed great popularity because the organisers carefully selected the leading architectural works representing the latest trends, as well as the most significant personalities," said Marián Zervan from the Slovak Technical University in Bratislava.

A Matter of Art does not claim to provide visitors with a complete understanding of contemporary Swiss architecture, but rather a subjective interpretation made by its organisers.

"We did not try to create a geographically balanced picture that would offer a space to each canton or language region [in the country]; nor did we want to balance all the specific tendencies that we tried to trace beforehand.

"Contemporary Swiss architecture interests us because it embraces the notion of architecture as an art form. The buildings we have chosen exist functionally and conceptually, but at the same time they are designed in a way that makes it possible to appreciate the architecture itself," Lucan explained the exhibition's concept.

The works at the exhibition are presented in the form of models, photographs, and plans on a scale of 1:100, accompanied by short texts in English. Three videos, one CD Rom, and a CD player interactively enrich the display with visual and sound documentation.

According to Zervan from the Technical University, Swiss architecture is remarkable for retaining its inner identity: It has not been broken by any developments and thus is present in modern works that reflect local conditions. Though, Slovak architecture is different, there are several parallels that can be drawn between these two architectural types.

"One was the start of the modern movements in Swiss and Slovak architecture in the 1920s and 1930s. Another analogy can be seen in that Swiss architects have been mainly educated at one institution, the Polytechnic School in Zurich, which has also been the case here - at the Slovak Technical University in Bratislava. Both institutions educated their architects in a similar way: in how to join regional, local traditions with world trends. This [type of design] culminated in Slovakia in the 1960s. Some architects might still aim for it today, but in Swiss architecture it has been a consistent issue. The last aspect of this analogy I can see is in the orientation of Slovak architects towards minimalism, for which the Swiss are famous," Zervan said.

Today's young generation of Slovak architects is directly influenced by Swiss architecture, but the two countries' architectural movements are no longer developing in parallel. The influence of minimalism can be seen in several buildings built around the country, mainly at family houses and villas. One such example is the family house in Stupava designed by David Kopecký and Ján Studený.

Other examples are administrative and shopping buildings, like Aupark in the Petržalka part of Bratislava, which is much more minimalist-oriented than its predecessor, Polus City Center.

"The aim behind inviting the exhibition to Slovakia was to show minimalist tendencies, which are being recycled here in Slovakia in a trivial/shallow way, in their authentic forms. And also to let our public see how it really works, that it's not something abrupt, something technical, but that it is artistic and has multiple meanings," Zervan said.

Swiss architects often use prefabricated, cheap materials to avoid making the construction too expensive, while still creating a pleasant environment with a characteristic atmosphere.

"The architects try to evoke an atmosphere by using the right materials. They don't strive for complex, significant issues or messages; they often stress that architecture is measured by what direct impact it has on people, which can be achieved by materials of various types and space configurations," Zervan said.

When entering the A Matter of Art exhibition, one might be immediately struck by the large number of schools, libraries and service centres, basically socio-cultural examples that are currently absent from Slovak architecture.

"These exceptional, original school buildings are the theme that dominates this architecture. It is caused not only by a large demand for schools but also because the communities in Switzerland are able to found new schools," Zervan said.

Swiss citizens will soon be able to see Slovak architectural works in their home. Entitled Impulses and Reflections, the exhibition is currently taking place in Vienna until April 16. The exhibition will open at the Swiss Polytechnic School in Zurich on April 28.