MÁRIA Ďuríčková, the author famous among children for her twin characters Danka and Janka, died on March 15 at the age of 84 in Bratislava. Her poetry and prose works, written for children and youth, received prestigious awards and were translated into 20 other languages.
Born in Zvolenská Slatina, Ďuríčková grew up close to her grandmother, a great storyteller. As a teacher, Ďuríčková worked in several places, including Bratislava. She wrote for the children's magazines Družba and Zornička. 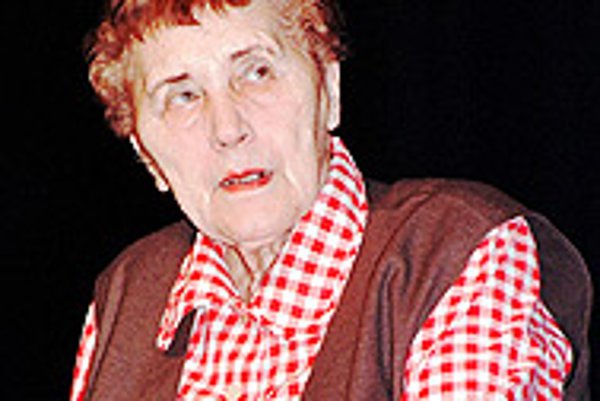 MÁRIA Ďuríčková, the author famous among children for her twin characters Danka and Janka, died on March 15 at the age of 84 in Bratislava. Her poetry and prose works, written for children and youth, received prestigious awards and were translated into 20 other languages.

Born in Zvolenská Slatina, Ďuríčková grew up close to her grandmother, a great storyteller. As a teacher, Ďuríčková worked in several places, including Bratislava. She wrote for the children's magazines Družba and Zornička. In 1954 she began working for the Mladé letá publishing house and between 1969 and 1971 she was the editor in chief of the children's magazine Slniečko.

"The main character in [Ďuríčková's] works was the Slovak language. It sounded soft, ancient, but also self-confident and contemporary," Miroslav Cipár, the illustrator of many of her books, wrote for the daily SME. He thanked the writer for enabling him to "travel the whole world in her books, as children from America to Japan have seen my illustrations".

ANOTHER significant personality in Slovak poetry and prose, Hana Zelinová, died a day after Ďuríčková, on March 16 at the age of 89.

Zelinová wrote 31 novels, 17 books for youth, and many radio and TV plays. Her books were translated into 15 languages. Her most popular work is the historical trilogy Alžbetin dvor (Elisabeth's Courtyard), which was also filmed. Children most remember her for her book Jakubko.

A prolific author, Zelinová wrote well into old age. Born in Vrútky, near the north-central town of Martin, she debuted with the collection of essays Zrkadlový most (Mirror Bridge) in 1941, but she had been active on the literary scene since 1933. She worked for the Slovenský východ and Novosti magazines in Košice. During the second world war she lived and worked in Prešov and Bratislava. Later she became the director of the Košice publishing house Svojeť. At the beginning of the 1950s she moved to Slovakia's capital and in 1960 she started working for the children's magazine Zornička. Zelinová also spent two years in parliament, representing the Democratic Party.

Her other novels include Diablov čardáš (Devil's Csardas), Volanie vetra (Calling of the Wind), Kvet hrôzy (The Flower of Fear), and another trilogy, Hodvábna cesta (Silk Road). Her work for children is also rich, consisting of more than a dozen books, such as Sivá húska (Little Gray Goose), and Do videnia, Zuzanka (Goodbye, Zuzanka).

In 2002, Zelinová was named the Personality of the Turiec Region and her birth town, Vrútky, opened a Zelinová memorial room to honour its famous native.

A COMPOSER and a long-time member of the Radošinské naivné divadlo (RND) theatre, Ján Melkovič died on March 21 at the age of 64.

A pianist, flautist, and harmonica player, Melkovič performed many characters at the RND and composed music for each of the theatre's plays. He starred in Ženské oddelenie (Female Department), Dohoda možná (Agreement Possible), and Súpis dravcov (Birds of Prey Registration), to name only a few.

Melkovič was born in the eastern Slovak town of Spišská Nová Ves. He studied musical composition and flute at the Bratislava Conservatory. In 1970 he played one of the main characters in Juraj Jakubisko's film Dovidenia v pekle, priatelia! (See You in Hell, Friends!), which was prohibited from screening at that time.

In 1983 he joined the RND as its exclusive composer. Songs from his repertoire were also issued on cassette and CD.

RENOWNED textile artist Agnesa Sigetová died on March 19 at the age of 64.

Born near Topoľčany, Sigetová studied under professor Ján Želibský at the Bratislava University of Fine Arts. After 1970 she was included in the group of artists prohibited from exhibiting their work because they did not comply with the demands dictated by the communist regime. Nevertheless, she continued to work. The situation changed after the 1989 revolution, and the artist eventually received the Martin Benka Award.

Sigetová exhibited in Sweden, Hungary, and Vienna. Currently, her works can be seen at the Incheba Congress Centre in Bratislava.

KVETA Gandlová, a painter respected throughout Europe, died on March 20 at the age of 77.

Born in Košice, Gandlová first studied at the Pedagogic Faculty of Performing Arts in Brno, Czech Republic, and then at the Bratislava University of Fine Arts under the leadership of Ľudovít Fulla and Ján Želibský.

A follower of the cubist, symbolist, and secessionist movements, Gandlová displayed her work in Poland, Canada, Japan, Great Britain, Germany, the US, and Cuba.