This tornado has a name

Tornádo Lue
Nebeskí Jazdci
Released by: Prví Veřejno Právní
Price: Sk350
Available: at most stores
THIS BAND has a way with names. A tornado is a very apt description of the incessant energy and bombast behind this album, and Nebeskí Jazdci (Heavenly Riders) is a good, literal description of what the album feels like when it grabs you and spins you off your feet. 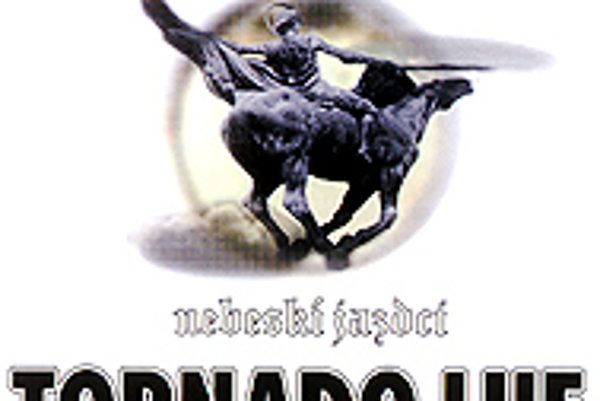 THIS BAND has a way with names. A tornado is a very apt description of the incessant energy and bombast behind this album, and Nebeskí Jazdci (Heavenly Riders) is a good, literal description of what the album feels like when it grabs you and spins you off your feet.

Now before you get the wrong idea about the kind of music this band plays, look again. This windstorm has a name: Lue. A name with a friendly, feminine personality that lets you know the band steers clear of the destructive, noisy characteristics of natural disaster and flies much sillier skies.

This tornado spins through the Wild West, using a retro-futuristic intro to beam listeners into heavy bass-guitar blues-rock in the first track. Then, in the second, it sends them off across the plains to the tune of The Ants Go Marching, only pausing for a surf-rock bridge. About halfway through this song, eponymous with the album, you begin to wonder if this is how Nick Cave and the Bad Seeds would sound if you caught them playing at the beach instead of suffering through their sins and bouts of drinking.

Though the band is Slovak, the majority of the songs on the album are in Czech. There is one German song, a kind of jazzy, urban, cowboy groove with touches of space-surf á la Man or Astroman?, and an unremarkable English cover of Blondie's Heart of Glass. The last track is also in English - a club-blues ballad convincingly sung by the band's singer, Jana Tóthová, that stays true to the group's sound with a sad soprano sax, and guitar replacing the piano.

Too much silliness can be a bad thing, but listeners need not fear. Though certainly done in the name of fun, this album, like a tornado, only snatches up bits of the Western and musical landscape.

You might notice a cactus here or a motorbike there, but that's only because the songs themselves are strong enough to hold them, and your interest too.

Tornádo Lue will play on April 2 starting at 21:00 at Terminal Club, Špitálska 4, Bratislava. Presale tickets are available at Dr Horák, Medená 19, and Artforum, Kozia 20, for Sk199.