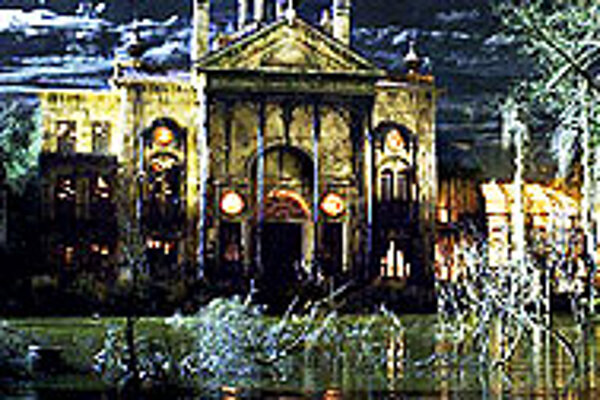 A SELF-REFLECTIVE documentary aside, Disney could not currently release a film more appropriate than The Haunted Mansion. It simultaneously epitomises and symbolises the crisis threatening the revered studio. Once grand, thriving structures, the mansion and the film company are both crumbling from within - haunted equally by the glory of the past and the harsh reality of what has come since.

Once one of Hollywood's most successful studios, Disney has performed erratically at the box office in recent years. Though at one point a great artistic innovator (Fantasia, Snow White, Pinocchio, and Bambi remain cinematic landmarks), it has consistently made the news recently not for its art, but for its business woes.

Many people close to Disney have called for the head of CEO Michael Eisener, arguing that his mismanagement has moved the studio away from what it does best (traditional hand-painted animation), and severed its most successful recent relationship - with computer animation house Pixar - with which it produced the extremely successful Finding Nemo, Toy Story, and Monsters, Inc.

Losing Pixar was obviously a great blow; the films they made together are some of the most successful in recent years. So what's the problem? The answer, at least in part, lies within The Haunted Mansion.

Like much of Disney's recent output, its source material is unoriginal. The company has focused much of its attention on remakes and straight-to-video animated sequels.

The Haunted Mansion takes it one step further (or is it back?): It is adapted from an amusement-park ride. At first glance, this would seem disastrous. Remakes are bad enough, but theme park rides? Yet, two of last year's most enjoyable films committed these very offences. Freaky Friday (a remake) and Pirates of the Caribbean (adapted from an amusement-park ride) each boasted inspired performances (Jamie Lee Curtis and Johnny Depp, respectively) and clever, witty scripts.

Both Disney films, they demonstrated that the studio is still capable of superior entertainment. So where does The Haunted Mansion go wrong?

Curtis and Depp were not only given funny material to run with; they were also given room to win over their audiences with their charm. The Haunted Mansion, on the other hand, seems to assume that audiences will naturally feel connected to its main character, Jim Evers, simply because he's Eddie Murphy. The man is capable of great humour, but only when he can be crude (not going to happen in a family movie) or create ridiculous caricatures.

In The Haunted Mansion, he is given nothing particularly clever to say or do. He plays an ordinary moron whose foolishness entraps his family in a mansion of ghosts who view him merely as an annoying obstacle. There is little reason to disagree with them.

Apart from some half-hearted and mostly failed attempts to generate humour and emotion, the film seems solely interested in its special effects. Unsurprisingly, they are quite good but, without anything substantive to hold them together, they come across as much better suited for, well, an amusement park ride.

Of course, the film ends happily, but, as long as Disney releases trash like The Haunted Mansion, its fate remains dangerously uncertain.