IN AN UNEXPECTED turn of events, the delegates of the founding congress of the Free Forum (SF) party elected Zuzana Martináková their chairwoman over the party's founder, Ivan Šimko, by a single vote.
The election results came as a "surprise" and perplexed not just the new chairwoman herself, as Martináková admitted, but also observers.
The fact "that Šimko, who is, so to speak, the spiritual father of the SF, was not elected indicates that there is a certain split inside the party," said Grigorij Mesežnikov, head of the Institute for Public Affairs (IVO) think-tank in Bratislava. 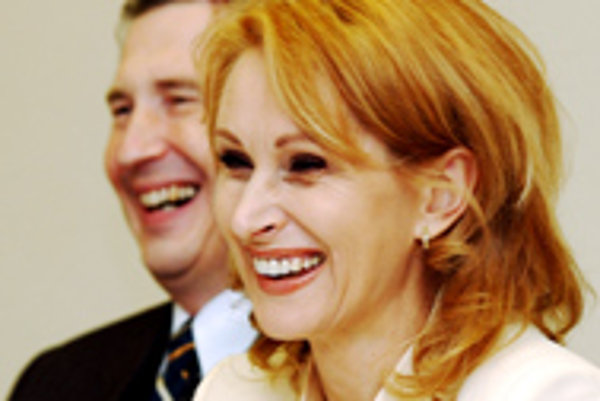 Font size:A-|A+0
IN AN UNEXPECTED turn of events, the delegates of the founding congress of the Free Forum (SF) party elected Zuzana Martináková their chairwoman over the party's founder, Ivan Šimko, by a single vote.

The election results came as a "surprise" and perplexed not just the new chairwoman herself, as Martináková admitted, but also observers.

The fact "that Šimko, who is, so to speak, the spiritual father of the SF, was not elected indicates that there is a certain split inside the party," said Grigorij Mesežnikov, head of the Institute for Public Affairs (IVO) think-tank in Bratislava.

Šimko, whose failure in the race for the top seat was described by some media as a debacle, could not hide his disappointment over the outcome.

As the speaker announced the results of the March 27 secret ballot - 131 votes for Martináková and 130 for Šimko, the new chairwoman leaned over her desk, supporting her bowed head with her arm and hiding her eyes behind her palm. Meanwhile, Šimko sat stiffly next to her, leaning back in his chair with arms crossed, his eyes revealing flabbergasted disappointment. A moment later, as Martináková reached out to shake Šimko's hand, he would not return the gesture.

Trying to save the situation, Martináková proposed that Šimko run for the post of the senior party vice-chairman, but his first reaction caused another shock to the delegates to the meeting of Slovakia's youngest party.

"Even if I were the first vice-chairman, what then?" Šimko said, stunning the audience.

After a break, Šimko finally accepted the candidacy, saying that he did so because of the trust that many of the delegates invested in him, although he added that, "as a man I think I should now accept the defeat and move on."

According to Mesežnikov, this start to the party, which was officially registered at the beginning of this year, reveals a rift inside its structures. Martináková rejected this suggestion, adding that she and Šimko had discussed the affair after her election.

"We discussed and clarified it the day after the meeting. I can say today that we will run the party in tandem, as I promised the delegates. They will have a party with Ivan Šimko and Zuzana Martináková in the lead," she said to The Slovak Spectator.

Mesežnikov said that in recent weeks Martináková had been actively promoting her party and was widely seen and heard in the media, which could have helped her win the support of SF delegates.

The analyst now expects the new party to "present a clear vision of their policy, and an understandable definition of their goals".

"So far the SF has spoken about values in politics and a democratic government, but they have failed to say clearly where they want to be going with this," Mesežnikov told The Slovak Spectator.

The majority of SF officials come from the ruling Slovak Democratic and Christian Union (SDKÚ) of PM Mikuláš Dzurinda. They left the SDKÚ after Šimko was fired from the party for disobeying the decision to recall Ján Mojžiš from his position as head of the National Security Office.

Dzurinda had accused Mojžiš of being part of an unspecified group that was working against the interests of the state and the SDKÚ. The police recently completed an investigation of the allegations and stated that such a group did not exist. Mojžiš has announced that he will sue the PM for libel.

After leaving the SDKÚ, Šimko and his followers proposed their vision of a "politics of values" - according to analysts a rather abstract plan that few voters and even experts have understood. Having left the ruling coalition in a minority position, the party representatives offered to support it only on the condition of the PM's replacement, which was unacceptable to the SDKÚ.

At the recent meeting the SF defined itself as a centre-right party and called for the creation of a special parliamentary examination committee that would inspect Dzurinda's steps in the group case.

However, in the recent vote of no confidence in Finance Minister Ivan Mikloš, an SDKÚ member, the SF indirectly supported the minister by not participating in the vote.

According to Martináková, that might not be the case if a new attempt to recall Mikloš came to parliament, as the SF would "probably support the recall". She said that politicians should practice understandable and straightforward politics. She also admitted that the time for an agreement between the SF and the ruling parties had passed.

"The SF, although it is a small party, is important because it represents a tender balance, and should it join the opposition the current cabinet will be short-lived.

They also represent a threat to the SDKÚ because the SF may take away the unhappy SDKÚ voter base and thus endanger the ruling party's chances to get into the parliament in the next general elections," Mesežnikov said.