ZUZANA Martináková, 43, is a former journalist who entered politics in the 2002 national elections on the Slovak Democratic and Christian Union (SDKÚ) ballot. She left the party with Ivan Šimko and worked by his side to create the Free Forum (SF). In the party elections on March 27, Martináková beat Šimko by one vote to become party head. Today she says that she is prepared to work "in tandem" with Šimko, building a centre-right party for the middle class. She spoke to The Slovak Spectator on March 29.
The Slovak Spectator (TSS): Your decision to run for the chairwoman of the SF came as a surprise to some observers. When and why did you decide? 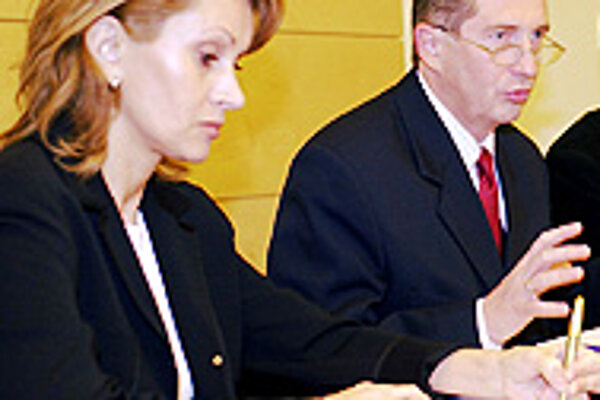 ZUZANA Martináková, 43, is a former journalist who entered politics in the 2002 national elections on the Slovak Democratic and Christian Union (SDKÚ) ballot. She left the party with Ivan Šimko and worked by his side to create the Free Forum (SF). In the party elections on March 27, Martináková beat Šimko by one vote to become party head. Today she says that she is prepared to work "in tandem" with Šimko, building a centre-right party for the middle class. She spoke to The Slovak Spectator on March 29.

The Slovak Spectator (TSS): Your decision to run for the chairwoman of the SF came as a surprise to some observers. When and why did you decide?

Zuzana Martináková (ZM): I was surprised by the outcome of the vote and I want to stress that the difference [in the elections for the SF leader] was one vote and that is how the victory needs to be seen, with all respect and honest commitment to the post.

Ever since we registered the party on January 13 we have been building it in the [country's] regions without any paid party functionaries. Today the party has 500 members and 300 delegates came to the party meeting. I was very actively engaged in the foundation of the party and it somehow came naturally that some of the people whom I met in the regions trusted our idea and political message and wanted me to run for the post. That is why we discussed this issue one day before the meeting and we decided that we would leave the [selection of candidates] to the delegates. I was surprised that the delegates only nominated Mr Šimko and me, but that is how it was.

TSS: What is the current relationship between you and Mr Šimko? After the results were announced he looked rather disappointed, to put it mildly.

ZM: We discussed and clarified it the day after the meeting. I can say today that we will run the party in tandem, as I promised to the delegates. They will have a party with Ivan Šimko and Zuzana Martináková in the lead.

TSS: What are your priorities? Many observers still fail to understand your political goals.

ZM: I consider the statements that our goals and objectives seem unclear to be comments coming from the competition, in the positive sense of the word. We have clearly showed that our engagement lies in two areas. The first is respect for the democratic rules of power and decency in politics. The second is a programme of a centre-right party that wants to push through laws that support the middle class. We make no secret of the fact that we are in favour of socially bearable reforms. Our politics at this moment are much clearer than that of many other established parliamentary parties.

TSS: What will be your position in the parliament? Is the SF an opposition party and how will you act if a proposal to recall cabinet ministers is submitted to parliament?

We see very clearly what programme we went to the [2002] parliamentary elections with. We are the people who realise that reforms are necessary for Slovakia and we want to make them better.

As far as the recalls of ministers are concerned, we will evaluate them when such proposals come to parliament and we will take an individual approach to the proposals.

TSS: Which parliamentary parties do you consider to be close to the SF in terms of their goals and views?

ZM: In the initial stages of the SF's foundation we began to organise a series of meetings with several parties and among the first parties we met were the [ruling] Christian Democrats (KDH) and the Hungarian Coalition Party (SMK). With these parties we also agreed on certain rules of the game, meaning that we would consult certain proposals with them and that we would confer with them in the event that their ministers needed support for their laws in parliament.

Many of our members came from the SDKÚ but we think that the party betrayed its program. We also met with the opposition party Smer and we said clearly where we thought our positions were different and on what issues we have similar views. Smer is posing itself as a left-wing party. Despite that, we can see some common areas for possible cooperation on specific issues even with them.

TSS: What is your position on the issue of early elections?

TSS: Can you imagine entering the cabinet or supporting it in parliament?

ZM: That is a very difficult question. When I said that the KDH and SMK were our close partners, I suggested that, in a way, we could imagine a certain form of cooperation with the ruling coalition. But in the SF we think that currently there is no place for us in the ruling coalition. All of the proposals that we considered important were rejected by the votes of the ruling parties, including the votes of the SMK and the KDH. I must say that I don't understand why they did not support them, especially considering that they wanted us to enter the coalition.

Today I can confirm the words of [SMK chairman] Béla Bugár that the time for talks with the SF on possible entry to the cabinet has run out.

TSS: Voter preference for the SF is quite low - about 2 percent. What do you want to do about this and what voters are you going to concentrate on?

ZM: We want to concentrate on creating a complex programme of support for the middle class; that is small- and medium-sized businessmen, teachers, doctors, all those who today feel that the reforms fall heavily on their shoulders, that they are paying for the reforms. This is the class that should be strengthened by reforms and not weakened, as is the case today. This is the voter base that we want to address. I think the Free Forum has the chance to succeed on the Slovak political scene and we will undoubtedly address many Slovak voters.