SPRING skiing is all about light clothing on uncrowded slopes. Freak snowstorms can create excellent powder conditions late in the season, but the snow most skiers associate with this season is "corn."
Corn snow is characterized by large, loose granules during the day that freeze together at night, then warm up again and loosen during the day. Corn offers skiers and boarders smooth, sun-baked crystals, soft as silk, atop a frozen base. The only problem with corn is its ephemeral nature 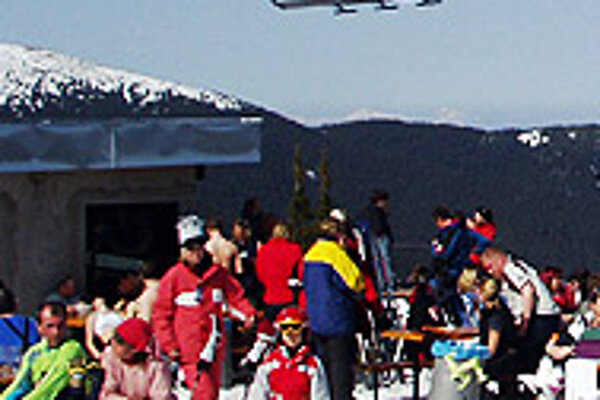 Font size:A-|A+  Comments disabled
SPRING skiing is all about light clothing on uncrowded slopes. Freak snowstorms can create excellent powder conditions late in the season, but the snow most skiers associate with this season is "corn."

Corn snow is characterized by large, loose granules during the day that freeze together at night, then warm up again and loosen during the day. Corn offers skiers and boarders smooth, sun-baked crystals, soft as silk, atop a frozen base. The only problem with corn is its ephemeral nature. Corn only forms for a few hours a day before turning into slush in the afternoon and later on at night, into frozen granular.

It is therefore best to start your skiing on southern slopes, where the sun is strongest in the morning, and move to northern slopes in the afternoon, when temperatures start to warm up and southern slope snow becomes mushy. Because of its north/south configuration, Jasná in the Low Tatras is our favourite spring skiing venue in Slovakia.

The new express train will whisk you from Bratislava to Liptovský Mikuláš in just three hours. From there, it is a 40-minute bus ride to the resort. A taxi can get you there in much less time for up to Sk500 (€12), but call ahead to arrange a pickup (0905/531-224).

Begin your ski day by taking the new high-speed six-person lift to Rovná Hoľa (1,480 metres). From there, ride the double to Konský grúň (1,829 metres), and then hike thirty minutes to the summit of Mount Chopok (2,024 metres), where you can access the south-facing Chopok Juh bowl. This bowl is steeper than the northern slopes and rarely groomed, so you should be comfortable with off-piste terrain before making this trek. Several pull lifts service this bowl, and food can be purchased at the Kosodrevina refreshment stand, but beware of their overly greasy sausages.

Once the sun gets strong and the Chopok Juh slopes become slushy, head back to the well-groomed, intermediate terrain on the northern, Jasná side of the resort. The upper slopes here are usually skiable for the entire day, even late in the season. Jasná offers five-day ski and stay packages from April 8 to 13, starting at Sk8,275 (€205). For more information visit www.jasna.sk.

There are other venues with good late season conditions that we recommend:

Zverovka-Spálená is situated in the coldest corner of Slovakia, near Orava. Slopes face north and are tree-lined, so snow holds late into the season. Pretty views of nearby alpine peaks and 1,800-metre long slopes make this an excellent resort for an overnight visit. The Hotel Tatrawest offers a one-night package of half board and a ski ticket for only Sk880 (€22) (excluding the Easter holidays). www.tatrawest.sk

Lomnické Sedlo lies above the town of Tatranská Lomnica in the High Tatras, where you will find a wide range of hotels and guest houses. The resort's slopes face south, so it is best to wake up early and hit them in the morning before the daily thaw cycle makes the snow too mushy. Lomnické sedlo's slopes are also very steep, making this resort better suited to experts than lower-level skiers. Be sure to make an excursion to Lomnický štít (2,632 metres). The gondola to this high peak runs every 20 minutes and you should book tickets in advance to reserve a spot. www.tatry.sk

Štrbské Pleso is another excellent late-season resort in the High Tatras. The high altitude of its slopes, most of which are above 1,400 metres, translates into great late-season action. The trails above the Interski base (1,360 metres) are mainly tree-lined and serviced by a chair and two pull lifts. The slopes emanating from the top station of the Solisko high-speed quad (1,814 metres) start out above the treeline and then descend below it. The reconstructed chata Solisko is a nice lunch spot. A day ticket at Štrbské Pleso costs Sk690 (€17) - more expensive than many other resorts but well worth the money because of the excellent snow and efficient lifts. Do not miss the "Lyžuje celá rodina" family ski race on April 11. www.parksnow.sk

Čertovica (1,120 - 1,460 metres) can offer excellent conditions late in the season because of its north-facing, mostly tree-lined slopes. The slopes in the Saddle area of the resort are covered by snow guns and groomed, but the upper slopes at Čertova Svadba are unprepared, natural snow slopes, and only suitable for experts. Skiers chatting on various internet forums complain that the ungroomed terrain at Čertova Svadba often freezes solid and becomes unskiable. But if the freeze-thaw cycle produces corn, experts will love this area situated in the Low Tatras range on the main road from Banská Bystrica to Liptovský Hrádok. www.holidayinfo.sk

In conclusion, pay close attention to the weather and snow reports. Temperatures have to be cold enough at night to freeze the snow and warm enough during the day to thaw it for perfect corn to form. Those with determination to ski in the spring will be rewarded with empty slopes and corn as smooth as butter. But ski early, lest your buttery corn turn to slushy mashed potatoes. For general ski information have a look at www.ski.sk, or www.holidayinfo.sk.