Slide & Udu
Ding Dong
Released by: Slnko Records
Price: Sk299
Available at: www.drhorak.sk
SLIDE & Udu's new album, Ding Dong, is like a fairly refined, yet unassuming cheese. If one focuses intently, there are subtle pleasures to experience, but the taste does not last for very long. It can easily be overpowered by an overly sophisticated mustard or wine - in this case, the sometimes too-slick production work that, though never completely overbearing, distracts from the subdued grace of the music. 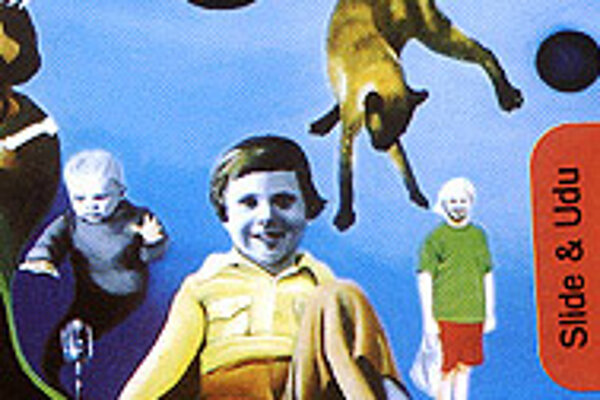 SLIDE & Udu's new album, Ding Dong, is like a fairly refined, yet unassuming cheese. If one focuses intently, there are subtle pleasures to experience, but the taste does not last for very long. It can easily be overpowered by an overly sophisticated mustard or wine - in this case, the sometimes too-slick production work that, though never completely overbearing, distracts from the subdued grace of the music.

The group's name is telling in two distinct ways. Most basically, by simply referring to the major instrument that each of the band's two members plays, it is emblematic of their unpretentious, straightforward approach to their music. Martin Zajko plays slide guitar and Ajdži Sabo plays udu drum. Both Slovak, Zajko and Sabo are clearly interested in many different types of music from around the world - the other important factor that their name suggests.

The udu is a traditional Nigerian instrument, while slide is a specific way of playing guitar (using what is usually a piece of metal or glass against the strings) popularized by blues musicians but with roots in West African music. They and their guests play a number of other instruments, as well - including flute, keyboards, accordion, and others from around the globe.

These many and varied instruments combine to create relaxed, multinational folk informed by jazz. Unfortunately, as is the case on tracks such as Kondor a kolibrík (The Condor and the Hummingbird) and Rosa (Dew), the too cleanly produced flute and soprano sax, respectively, evoke the sort of smooth jazz that has caused many to conclude that "jazz is dead".

This propensity for slickness also hinders otherwise effective tracks like the laid-back country-soul of Mesiac a kaluž (The Moon and a Puddle) and Bylinky a iné kúzla (Herbs), which has echoes of '80s funk/r&b.

The pretty simplicity of the music does occasionally shine through, however. Možno raz (Maybe One Day) uses ukelele and accordion to seamlessly combine Hawaiian and Cajun (zydeco) music. The enigmatic keyboard line of Nechce sa mi (I don't want to) draws you in and the jazzy French pop of Hovorím s ňou (I Talk With Her) is effortlessly cool.

But ultimately, while Slide & Udu can be perfectly pleasant, they are not substantial enough to fully satiate. As such, they are not really suitable for a main course.