THE MUCH-anticipated meeting of the ruling parties following the first round of presidential elections, which saw Slovak Democratic and Christian Union (SDKÚ) candidate Eduard Kukan flop to the surprise and even shock of some observers, did not result in any shake-up of the right-wing government. 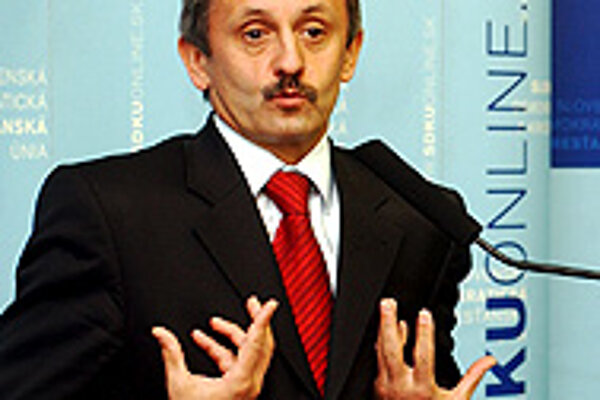 Font size:A-|A+0
THE MUCH-anticipated meeting of the ruling parties following the first round of presidential elections, which saw Slovak Democratic and Christian Union (SDKÚ) candidate Eduard Kukan flop to the surprise and even shock of some observers, did not result in any shake-up of the right-wing government.

The initial reactions that came from the ruling partners after Kukan - the clear favourite according to opinion polls - finished third included an appeal from the Hungarian Coalition Party (SMK) for PM Mikuláš Dzurinda to leave his post.

While the apparently upset PM told media shortly after Kukan's failure was announced that he would "undoubtedly think about the party's future, and my own", leading some to believe that he would consider leaving the post, Dzurinda emerged considerably invigorated from the meetings of the SDKÚ's senior bodies on April 5 and 6.

On April 5 the SDKÚ senior party body expressed "full political support for the PM, as well as the SDKÚ's cabinet members and the whole cabinet".

The party also stated that the invalid referendum on early elections, held on the same day as the first round of the presidential ballot, was "an important confirmation of the cabinet's mandate".

One day later, Dzurinda announced at a press conference that the election failure had strengthened his party, which faced several scandals peaking just before the presidential ballot with suspicions, currently under investigation, that the SDKÚ manipulated its books (see story page 2).

"The SDKÚ is firm as granite, united, and strong," Dzurinda said, much to the surprise of his ruling partners who expected changes in the party.

Ahead of the coalition council meeting, Gyula Bárdos from the SMK said that the lack of any consequences showed that the SDKÚ was unable to reflect on its mistakes and he even said to the Slovak daily Pravda "it's as if it was a different PM, a different Mikuláš Dzurinda."

The coalition council meeting on April 8 was interrupted after two hours and the ruling partners agreed to reunite after the second round of presidential elections, which is scheduled for April 17.

Dzurinda has insisted that the ruling partners do not have the right to interfere in SDKÚ personnel affairs.

According to the SMK, however, the replacement of Dzurinda could facilitate the return of the Free Forum (SF) MPs - former SDKÚ members who left the party because they disagreed with several of Dzurinda's decisions at the end of last year - to the ruling coalition, which would help stabilise the minority cabinet.

Even SF chairwoman Zuzana Martináková said recently that her party would consider entering the cabinet if Dzurinda was eliminated from the PM post.

But Dzurinda's plan to secure a majority for the ruling parties did not include relinquishing the PM seat.

"I will search for support primarily among former cabinet MPs [former SDKÚ MPs, including those in the SF, and New Citizen's Alliance (ANO) MPs who left their party last year]. I will also solicit the support of independent MPs and I will welcome and appreciate it if the opposition MPs supported us on occasion," Dzurinda said.

Speculation that the opposition party Movement for a Democratic Slovakia (HZDS) of presidential candidate Vladimír Mečiar could support the Dzurinda cabinet appeared after Mečiar said on April 4 in a TV Markíza discussion show that there was "a space for political agreements that would help stabilise the cabinet".

"There is no need for a minority cabinet in Slovakia. There are sufficient reserves allowing the PM to create sufficient political support for verbal agreements," said the three-time ex-PM Mečiar, who is widely blamed for running the state into international isolation with his cabinets between 1992 and 1998.

With 26 MPs behind him, Mečiar could help the cabinet parties, who currently have 68 of the parliament's 150 seats. But HZDS policy is largely inconsistent with that of the reformist Dzurinda cabinet.

When asked whether he could imagine agreements between the cabinet and the HZDS, Dzurinda said, "I don't think that is realistic."

However, echoing the feeling of some ruling MPs, ANO's Ľubomír Lintner said that a "real agreement with the HZDS would be better" than the continuous attempts to agree with independent MPs ahead of votes in parliament regarding crucial cabinet laws.

Following the interrupted April 6 coalition meeting, ruling politicians refused to comment on the situation, stating that they had agreed not to discuss the proceedings in the media until the meetings were over.

While the Christian Democratic Movement and the ANO appealed to their voters to ignore the elections completely, arguing that neither Mečiar nor Ivan Gašparovič, who are long-time political peers, should be seen as the "lesser of two evils", the SDKÚ and the SMK took a more diplomatic position.

Both parties said that it was up to their voters to decide whether they wanted to participate in the elections, although both chairmen, Bugár and Dzurinda, announced that they would not go to the polls.

Due to Mečiar's disciplined electorate, however, ignoring the elections would help the ex-PM, whose party the West associates with the slip away from democratic government.