PRIME Minister Mikuláš Dzurinda's Slovak Democratic and Christian Union (SDKÚ) has been plagued by a scandal that broke out last week in which the ruling party is suspected of manipulating its financial reports.
The sum has climbed steadily, as new fake donors have been identified, to reach more than Sk1 million (€25,000) according to the latest reports. 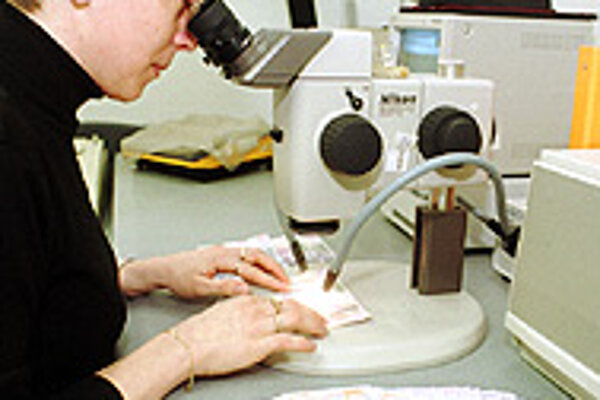 Font size:A-|A+0
PRIME Minister Mikuláš Dzurinda's Slovak Democratic and Christian Union (SDKÚ) has been plagued by a scandal that broke out last week in which the ruling party is suspected of manipulating its financial reports.

The sum has climbed steadily, as new fake donors have been identified, to reach more than Sk1 million (€25,000) according to the latest reports.

Findings of the Fair Play Alliance (AFP) watchdog group showed that some people the party had claimed as donors denied giving any money when the AFP called them to confirm the SDKÚ's financial reports from 2000 - 2002.

The AFP also randomly rang the donors listed in the financial books of other parliamentary parties.

Among the fake donors are former SDKÚ members, such as the ex-mayor of the eastern Slovak town of Prešov, Juraj Kopčák, listed as having donated Sk50,000 (€1,250). He denied the gift.

Also under question is the listed donation of Michal Ambrovič, a former SDKÚ member who left the party at the end of last year. He is now a member of the Free Forum, which was founded by a group of politicians who became increasingly critical of the SDKÚ's policy style as represented by Dzurinda.

"I found out that I was among the donors in the autumn of last year when the AFP contacted me. I told them, just like I say now, that I don't know anything about giving any money to the party. It's just not true," Ambrovič told The Slovak Spectator on April 5.

At a press conference on March 31, the PM insisted that the information in the party's financial reports was true, dismissing the allegations as unfair for appearing in the press only three days ahead of the April 3 presidential elections.

Dzurinda later admitted that the funding affair contributed to the failure of Eduard Kukan, the SDKÚ presidential candidate, to make it to the second round of the presidential elections (see story page 1).

In his reaction to the allegations, Igor Kucej, the SDKÚ treasurer, told the SME daily that the "people who are on the list gave the donations. [Now] they are lying."

Ambrovič rejected this accusation, suggesting that Kucej was the liar.

"If Mr Kucej is saying that I am lying then all I can say is that the saying 'I judge others by my practices' probably applies," Ambrovič said.

Ambrovič said he had not ruled out taking legal steps against the SDKÚ.

In an attempt to defend itself, the party has asked the parliamentary budget committee and its own revision commission to re-examine the books by the end of April.

Meanwhile, however, more suspicious donors were discovered, one of which had allegedly given as much as Sk1 million (€25,000) to the SDKÚ.

According to the Slovak daily Pravda, the gift was attributed to Marián Lukniš from the village of Orešná. He refused to confirm whether he had given the money to the party. Another man who allegedly donated Sk150,000 (€3,744) said he did not remember whether or not it had really happened.

Slovak police officials confirmed that they would inspect the allegations.

The AFP's president, Zuzana Wienk, told The Slovak Spectator on April 2 that her organisation would submit its findings to the police in the coming week.

The affair has raised concern that the SDKÚ scam may only prove to be the tip of the iceberg as, according to observers, other Slovak political parties may also be involved in shady practices, using loopholes in the legislation on party finance.

Wienk said that, while checking the donors of other parliamentary parties, the AFP had encountered "unconvincing reactions of the type 'I don't remember how much I donated'."

"All of those people [unlike the SDKÚ's alleged donors] knew that they were listed among the donors," Wienk said.

The SDKÚ's ruling partners have said that the funding scandal was an internal problem.

According to Béla Bugár, the Hungarian Coalition Party chairman, the affair has thrown "all the steps we took against corruption" into doubt.