La Fille du Regiment
Composed by: Gaetano Donizetti
Conducted by: Rastislav Štúr, Martin Mázik
Where: Slovak National, Theatre (SND), Hviezdoslavovo námestie, Bratislava
Next performances: April 15 and May 29
Performed:in two acts, in French with Slovak supertitles
Rating: 9.5 out of 10
DO YOU like the combination of green, blue, red, and white? Do you like to hear broken French? Would you like to see a human-sized mouse? Do you like to go to the opera for great entertainment with beautiful music? 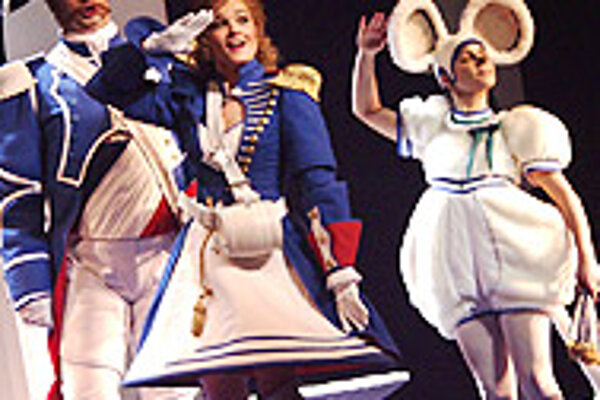 If your answer is "yes", then you should have been at the SND on March 19, 20, or 22, when Gaetano Donizetti's opéra-comique La Fille du Regiment premiered. Jozef Bednárik, the director famous for his controversial and extravagant stage creations, showed his talent and his eye for buffoonery with the revival of one of the lesser-known operas by the Italian composer.

The story of the opera is very simple but not always logical. Written in 1840, it describes events of 1815. The 21st regiment of the Grand Army of Napoleon is in Tyrol. Marie, a young woman, is adopted and educated by the regiment. She falls in love with the simple Tyrolean Tonio, who rescues her from death. In order to marry Marie, Tonio joins the regiment. Suddenly, the Marquise of Berkenfield appears and identifies Marie as her long-lost niece and takes her to the castle. The Marquise wants Marie to get married to a noble man, so Marie receives lessons in good manners. Tonio appears in the castle and Marie decides to secretly run away with him. Confessing to the sergeant, Sulpice, that Marie is her illegitimate daughter, the Marquise finally agrees to the marriage of Marie and Tonio.

The reason Bednárik chose this and not another of Donizetti's opuses is easily understandable: It provides plenty of material to create comic situations and funny characters. An exotic girl educated by the French regiment, Tyrolean peasants welcoming Napoleonic troops on their territory, the comic figures of the Marquise of Berkenfield and her butler, Hortensio - all these serve as objects of mockery and buffoonery.

Jozef Bednárik, costume designer Ľudmila Várossová, and stage designer Vladimír Čáp worked together for the same task: to create one big grotesque image. The main rule of the grotesque is an exaggeration; that's why every detail in this opera is taken to its very extreme.

The Tyrolean house in the first part of the opera looks like a piece of Emmenthal cheese, and the castle in the second part - as a cream cake. The French flag is 10 metres long, French soldiers wear asymmetric uniforms, each with one enormous shoulder strap. The dominant colours - bright green, blue, red, and white - compose a playful picture. Várossová, who has sophisticated artistic taste and a great sense of harmony, has created fascinating costumes. It's just enough to mention that the main characters - Tonio, Marie, and the Marquise - change dress three times. And each time, those costumes are rich in detail and well adapted to the situation.

Another rule of buffoonery is a mixture of dramatic, lyrical, and comic moments. Bednárik demonstrates his absolute mastery by introducing ironic details in the most lyrical moments of the opera. For that he invents a charming mouse of human size - a mime of sorts that provokes the public's laughter by dancing and making faces. A big frame is used to give names to the different episodes and moods of the opera, reminding the public that even the most serious passions are just a funny game.

The game proposed by the stage director seemed so attractive that even the singers were engaged in it. They obviously enjoyed the grotesque characters of their heroes and played all comic situations with fun and grace.

Petra Nôtová, who played Marie on the evening of March 22, sparkled like a real star. Beautiful, graceful, natural, and self-confident, she also demonstrated great vocal qualities in difficult virtuoso arias. Her voice, flexible and equally bright in various ranges, crowned the musical texture of the opera. She and Ľudovít Ludha (Tonio) created a perfect match. The technical difficulties of Donizetti's music challenged Ludha's tenor to the maximum, but he got through the challenges reasonably well.

The orchestra, conducted by Martin Mázik, provided good support to the singers, but still could work harder to bring better musical harmony.