Caught in the act

Hogo-Pogo
Live Žákovic: Open 2003
Released by: Millenium Records
Price: Sk299
Available: at most stores
THOUGH this group has been around since the beginning of the 1990s, they take things easy and practice or perform only sometimes. Their other album was released over four years ago, and last year they played live only once, at the July Žákovic Open 2003 festival in Trenčianske Bohuslavice. The result was this album. 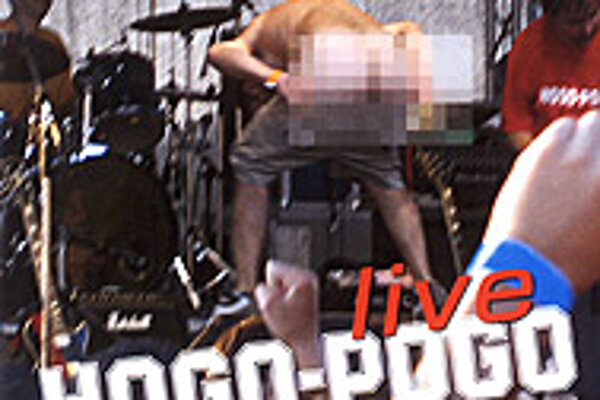 THOUGH this group has been around since the beginning of the 1990s, they take things easy and practice or perform only sometimes. Their other album was released over four years ago, and last year they played live only once, at the July Žákovic Open 2003 festival in Trenčianske Bohuslavice. The result was this album.

Bearing their work ethic in mind, it is safe to say it was in the best interest of both their fans and the good sides of their musicianship that their sophomore release was a live one.

The band took its name by fusing part of the title of the 1970s comedy series about the Homolka family, which mocked stereotypical Czechoslovak characteristics, and the punk pogo dance. A little too poppy and happy for one to envision fans leaping up and down and crushing each other in the process, as this dance prescribes, their performance fits their name.

For example, there is the short Rum a Stein (the latter is Slovakia's working-class beer), a parody of the German metal band Rammstein that evokes a chuckle. Meanwhile, Leto na Hvare, their most well-known song, is dedicated to the Croatian island it names and is as easy going as you would imagine a band on vacation to be.

They also throw in rock based on American country folk music on Kowbojská, and give the good old blues-rock horse a beating on Tuberácky Chracheľ.

Guests appearing on the album are Tomáš Sloboda (guitar) and Martin Stempel (saxophone and percussion), members of the "post ethno" Bratislava band Le Payaco. Stempel's presence on this last track does little to buoy it.

Other excitements are a song named after and performed by Dušan Slimák, the lead singer and another, Yxov R'n'R (Yxo's R'n'R), named after the bass player. As far as I know, the other two members do not have ones of their own yet.

To say that Slimák cannot sing, as proved on Modrá (hnedá), a slightly sentimental mellow rock-out that requires a voice that can sustain, probably misses the point of the band, and the song is actually one of the album's more endearing.

As a final bonus, and to round out the concert experience, the CD comes with three video-clips that, very importantly, let you see the mooning pictured on the album's cover in glorious action. That, certainly, is a musical element that no studio album could produce.