Calendar Girls
Starring: Helen Mirren, Julie Walters, John Alderton, Linda Bassett, Annette Crosbie
Directed by: Nigel Cole
Running time: 108 min
Rating: 7 out of 10
FEW things seem to rile anglophones up like nudity. In Great Britain and its partner in puritanism, the US, public nudity can ignite a cultural war. Overly ripe subjects like Janet Jackson aside, it mostly seems as if Brits and Americans, uncomfortable with sex and incapable of separating sex from nudity, find being naked downright embarrassing. 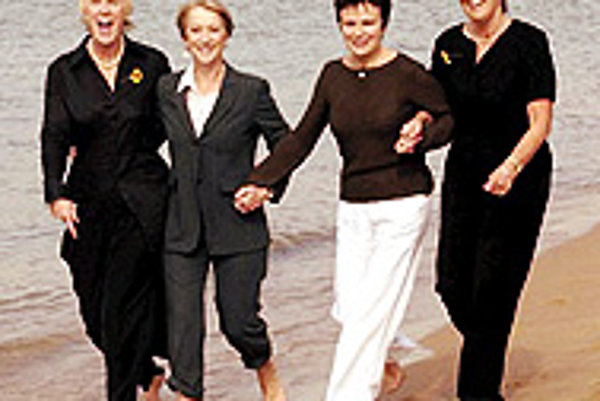 FEW things seem to rile anglophones up like nudity. In Great Britain and its partner in puritanism, the US, public nudity can ignite a cultural war. Overly ripe subjects like Janet Jackson aside, it mostly seems as if Brits and Americans, uncomfortable with sex and incapable of separating sex from nudity, find being naked downright embarrassing.

Naturally, what's embarrassing lends itself to humour. Nudity has been mined for laughs in many a British and American movie, with Calendar Girls being the most recent example.

But what sets it apart is its nude subject: middle-aged women. Movie actresses frequently complain about the lack of substantive female roles - something that only gets worse with age. If no longer young and perky, they have difficulty finding work in such a sex-and-youth-obsessed culture. Basically, when things start sagging, the scripts start disappearing.

Of course, this is certainly not something unique to the movies. Ask most young men if they would like to see their friend's Aunt Maude naked and, with rare exceptions, they will firmly decline. Calendar Girls wants to challenge this.

Lifelong friends Annie (Julie Walters) and Chris (Helen Mirren) belong to the Rylstone Women's Institute (RWI) of North Yorkshire, England, a group that spends its time baking, listening to riveting lectures on the many uses of broccoli, and planning charity calendars featuring the churches of Yorkshire county.

To liven up the meetings, Chris wants Annie's husband, John (John Alderton), a thoughtful, witty man with a passion for flowers, to come speak. But, after he is stricken with cancer, this becomes impossible. Just before his death, he writes a speech in which he likens the women of North Yorkshire to its flowers: They get more beautiful with age.

Inspired by John's words, Chris plans to create a slightly different charity calendar: She wants to replace the churches with nude photos of her and her friends to raise money to buy a new couch for the hospital. After some reluctance, the women do it and, not only do they raise the money, they become international celebrities.

The prospect of repressed British women taking their clothes off is undeniably amusing, if not substantial enough to base an entire film on. Thankfully, the film allows its extremely talented, comically tuned actresses to generate humour not only focused on their bodies.

Particularly with its casting of Mirren, it also makes a persuasive argument for sexiness regardless of age. An incredibly smart and talented performer, Mirren, nearly 60, is also irrefutable proof that physical beauty need not be bound by years.

Where the film falters is in its attempts at drama, in trying to explore the effect of celebrity on the relationships the women have with one another and with their families. Not fully explored, these side plots simply take away from the true sadness at the story's centre: death, loss, and shame.

Fortunately, the film provides enough humour and sheer talent to keep it afloat. It's a charming way to inspire women - regardless of age - to shed their clothes, if so inclined. Preferably if they're Helen Mirren. But even if they're Aunt Maude.