Adventure is in the air

AMERICAN John Sherman has climbed over 15 thousand different boulder problems in his 29-year career.
He has criss-crossed the US in his van, searching for formations to climb in each of the 50 states. In mountainous regions like California, Colorado, and Wyoming, it was easy. But when he entered the flatlands of Louisiana and Florida, it was a bit more difficult, leading him to climb anything he could find - be it a sculpture or a construction site. 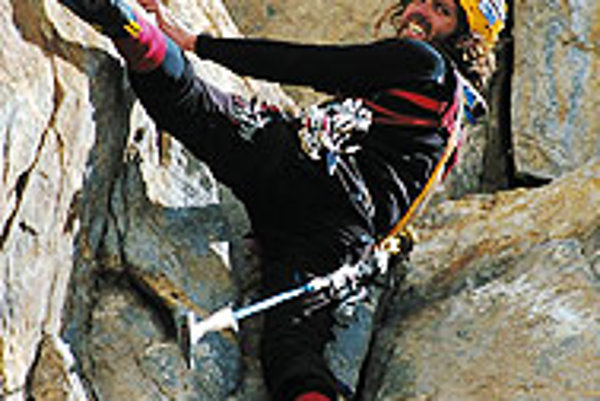 He has criss-crossed the US in his van, searching for formations to climb in each of the 50 states. In mountainous regions like California, Colorado, and Wyoming, it was easy. But when he entered the flatlands of Louisiana and Florida, it was a bit more difficult, leading him to climb anything he could find - be it a sculpture or a construction site.

He captured his quest of "absurd desperation" in slides, which he will present to a Bratislava audience during the Mountains and City 2004 festival of mountain film and adventure, in a show entitled The Fab 50.

"Sherman is one of the main proponents of the bouldering discipline, the climbing of smaller rock formations that is also popular here in Slovakia," said Alan Formánek, the programme director of the festival.

Sherman's show will take place on the second day of the Mountains and City 2004 festival, on April 23 at 19:00. The festival, primarily a film competition that takes up to 70 percent of its films from a similar, preceding event in Vancouver, will also welcome three other top athletes.

Canadian Will Gadd, one of the top extreme sportsmen in the world, will open the event on Thursday, April 22, at 19:00. An athlete par excellence known for climbing dangerous ice routes, pioneering new descents down wild rivers, and setting records with paragliding flights, will talk about Mixed Feelings - mixing climbing and paragliding in North America.

Thomas Huber of the strong German mountaineering brother-duo the Huberbaum (Huber boys), will give a presentation on climbing extreme routes on Saturday, April 24, at 19:00. Unlike his younger brother Alexander, who participated in the festival two years ago, Thomas must constantly deal with his sensitivity and emotions while climbing. Emotional crises have caused him various problems while climbing, but he says he has become immune to it, learning that "the key to success was not in my talents as a climber but in the area of emotions".

The guest closing the festival on Sunday, April 25, at 17:00, is Canadian climber Kim Csizmazia. A diverse multi-sport athlete who has won many competitions, Csizmazia grew up skiing, hiking, and running in North American mountain towns. In her slide show, she will talk about climbing in desert areas of the US, such as Utah and Arizona.

"The public's interest in this festival is increasing," said Tamara Greksáková, the festival's executive director. This explains its move from Bratislava's culture houses to the large cinema multiplex in Aupark, which will satisfy not only the growing number of visitors but also the technical quality of the projections.

Following tradition, the films screened during the Mountains and City 2004 festival will be divided into four categories based on the themes of rock, earth, water, and air. Altogether, 40 films from 12 different countries will compete for the three main prizes and the viewer's prize.

Will Gadd and Alek Lwow, the successful Polish climber and publisher of mountaineering magazine Góry I Alpinizm, are among the members of this year's international jury. The winning titles will then tour the rest of the Visegrad Four countries - the Czech Republic, Poland, and Hungary.

The films will be screened in their original versions with Slovak and English subtitles or translation.

Half of the eight Slovak films will be debuts. The foreign titles visitors can choose from include The Trip, an Austrian road movie about climbing, surfing, and flying in the best parts of Europe; In the Shadow of the Chief, a Canadian retrospective of the historical first climb of the Squamisha wall; and the Swiss-Austrian film BASE Matterhorn by Maria Kreuzer, about an interesting base jump.

Or one can get a better idea of what type of climbing Sherman is talking about in his slide show by watching The Pilgrimage by Josh Lowell. It documents a bouldering expedition led by Chris Sharma "exploring the infinite possibilities" found in the sacred Indian village of Hampi.

According to the festival's programme director, Formánek, an occasional boulder climber himself, Slovakia is also an ideal place for this kind of rock climbing.

"Bouldering is done on a smaller scale and without rope; [the stunt] is condensed into several extremely difficult moves performed close to the ground, and there are many great areas here where one can train for this sport," he said.

He reported that Sherman has decided to stay in Slovakia for three weeks, with the intention of exploring local rock climbing possibilities. The organisers plan to take him to the country's traditional mountaineering areas, such as around the Pajštún castle ruins near Bratislava and Manínska úžina canyon near Považská Bystrica.

What: Mountains and City 2004 (Hory a mesto) -
Fifth international festival of mountain film and adventure.
Where: Palace Cinemas at the Aupark shopping mall, Einsteinova, Bratislava (Petržalka).
When: April 22 to 25, from 10:00 to 22:00 (opening on April 22 at 19:00).
Tel: 02/5465-3651 (- 2).
The festival also offers outdoor competitions and attractions for the public, including a speed-trial race under the supervision of trick cyclist Tomáš Langermann, as well as photo exhibitions and information provided by local travel clubs.