THE FESTIVAL of Easter is celebrated in numerous different ways by many of the countries in Europe, and for different reasons.
For some, it is a commemoration of the crucifixion and subsequent resurrection of Jesus Christ, but for those with a more pagan standpoint, especially in farming communities, it is a celebration of the turning of the seasons from winter to spring. Of course, there are those, especially among the young of western Europe, to whom the giving and receiving of chocolate eggs is paramount. 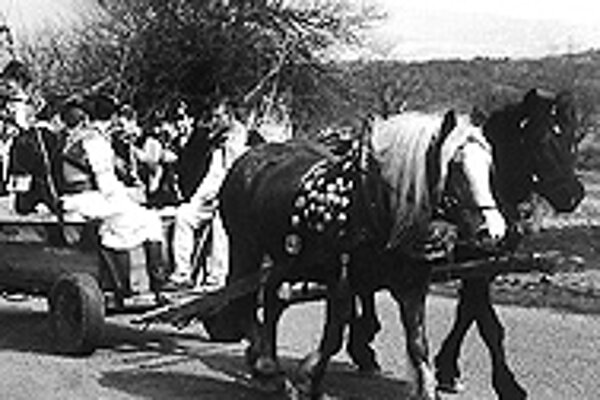 Font size:A-|A+  Comments disabled
THE FESTIVAL of Easter is celebrated in numerous different ways by many of the countries in Europe, and for different reasons.

For some, it is a commemoration of the crucifixion and subsequent resurrection of Jesus Christ, but for those with a more pagan standpoint, especially in farming communities, it is a celebration of the turning of the seasons from winter to spring. Of course, there are those, especially among the young of western Europe, to whom the giving and receiving of chocolate eggs is paramount.

As an Englishman abroad and a devout atheist, I tend to assume the role of a mere interested observer and so, as the Easter period approached, I spent some time researching local customs through the ages.

I had been led to believe that the predominant religion in Slovakia was Catholicism, so I was surprised to discover that many of the rituals surrounding this holiday period seemed to have more pagan roots, although the distinction between the beliefs was somewhat blurred.

The Easter weekend here begins with Zelený štvrtok (Green Thursday), so called because of the traditional consumption of green vegetables, essential for year-round health and strength, and this was historically seen as a day of cleansing. This, naturally as an addition to normal everyday ablutions, was meant to be undertaken in running natural water; it is said that if a girl were to bathe in a spring before sunrise, she would ensure blemish-free skin and lustrous hair all year long.

The evening of Veľký piatok (Big Friday) had an altogether more sinister significance. It was believed that this was the time when witches came out in force, damaging crops and trees, and stealing milk from cows. Meanwhile, warlocks patrolled the streets with the firm intention of crippling, sometimes even killing, anyone who had the misfortune to pass their way. To guard against these dark deeds, generous amounts of garlic were added to meals, including those of the livestock, and were spread liberally around the entrances of stables.

If one survived to see the dawning of Biela sobota (White Saturday), then one would burn anything harmful, or of no further use, a tradition known as "the burning of Judas", the religious significance of which went hand-in-hand with the belief that looking into the heart of the fire had magical protective powers. Later on, a celebratory meal of pork, symbolizing wealth and power, was cooked over the embers.

On Veľkonočná nedeľa (Easter Sunday), the only practice that I could find reference to was the customary attendance at church.

The traditions most often associated with Easter in Slovakia occur on Veľkonočný pondelok (Easter Monday). During the morning, unmarried girls in the village would await the arrival of the kúpači, young men who would come calling to sprinkle or douse them with water, a gesture meant to bestow the ladies with year-long beauty. These unfortunate young women may also have been subjected to a light whipping with rods made from freshly cut willow branches, braided so that they resembled plaits of hair, and tied off with a ribbon at the end. However, contrary to this being an excuse for ill treatment, the reasoning behind this act was the hope that all the fertility and life from the willow would transfer into the girl. In return, the men would receive painted eggs (kraslice), another symbol of fertility, and may also be furnished with sweets and local spirits, completing a ritual still practiced in many parts.

With this in mind, and eager to test my theory that growing modernisation stifles cultural heritage, I spent the holiday period in and around the Poľana region of central Slovakia.

On Monday, under the watchful gaze of mountainous forests and vast skies, I walked the streets of Detva behind a horse-driven cart carrying the male members of a local folk group, which made up the kúpači. Dressed in traditional costume unique to that area, they sang folk songs accompanied by fiddles and a cello, intermittently stopping to knock on doors intending to entice young ladies out to receive their oblievačka (watering). Although many windows opened, with curious heads popping out for a better look, I couldn't help but notice that there was a distinct lack of young women around, though I couldn't blame them; personally, I think that I would rather grow old and haggard than be drenched and beaten.

As we ventured away from the centre of town, we eventually stopped at a house in which there were willing participants. In the front yard, a couple of the kúpači held the girls' hands on either side, while the others emptied buckets of water over their heads. Soaked, but laughing, the girls retired indoors, reappearing moments later in a change of clothes and bearing trays of food and drink.

Acknowledging my dogged perseverance in following the group, and with more than a hint of amusement, I was invited by the cellist to join them in the consumption of borovička (distilled from juniper berries). Deciding that the possibility of displaying a weak English constitution that early in the morning could only harm the reputation of my countrymen, I politely declined, and we parted ways.

On my journey back to the capital, whilst noting the appearance of more and more advertising billboards alongside the road, I came to the conclusion that my theory is by no means complete. In an age of increasing commercialism and the comparable decreasing innocence of children, it is reassuring to see that some places still adhere to the traditions of their forebears... however they may be viewed by the politically-correct West.