SPECULATIONS that Vladimír Mečiar's opposition party the Movement for a Democratic Slovakia (HZDS), might be willing to support the ruling coalition, which has lost its majority in parliament, have calmed since Mečiar was defeated in the presidential elections. 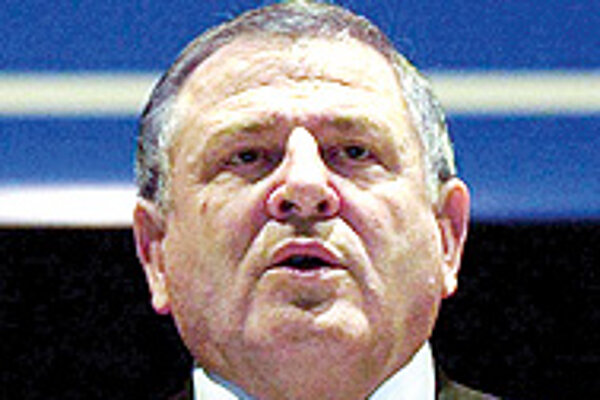 Font size:A-|A+0
SPECULATIONS that Vladimír Mečiar's opposition party the Movement for a Democratic Slovakia (HZDS), might be willing to support the ruling coalition, which has lost its majority in parliament, have calmed since Mečiar was defeated in the presidential elections.

In his initial reactions to the victory of long-time party mate Ivan Gašparovič, who left the HZDS before the 2002 national elections, Mečiar suggested that his party would neither support the cabinet nor join the other opposition forces.

"Time will bring a considerably different HZDS, not just from the coalition parties, but also from [the opposition party] Smer," Mečiar said.

The statements were in sharp contrast to what the HZDS leader had said shortly after his clear victory in the first round of the presidential race.

On April 4 in a political show on TV Markíza, Mečiar said that there was "a space for political agreements that would help stabilise the cabinet".

The latest comments have provoked criticism from Mečiar's colleagues, who lashed out at their leader for refusing to congratulate Gašparovič and for announcing that the HZDS had nothing to discuss with the new president in the future.

The five right-wing ruling parties, which have 68 of the 76 votes needed to secure a majority in parliament, have given themselves until the end of April to remedy their situation. At the end of the month the heads of the ruling parties will meet and discuss the resolution of the current situation.

Support from Mečiar was never an official theme, however, as the three-time PM was unlikely to be accepted by the cabinet's electorate.

Instead, two of the four ruling parties have consistently campaigned for the coalition to reach agreements with the 10 MPs who have left the ruling bloc since the 2002 national elections, specifically from Prime Minister Mikuláš Dzurinda's Slovak Democratic and Christian Union and the liberal New Citizen's Alliance (ANO). A number of these breakaways formed the Free Forum opposition party, which refuses to cooperate with Dzurinda.

Béla Bugár, the head of the Hungarian Coalition Party, recently said that Dzurinda should consider resigning from the post of premier in order to secure the support of the Free Forum MPs.

Another possibility, suggested by Dzurinda, was to forge agreements with the independent MPs who have left the opposition parties since the 2002 elections.

In the presidential election "citizens sent a message to all politicians that [they say] 'no' to Vladimír Mečiar, but perhaps 'yes' to the HZDS," said Pavol Hrušovský, chairman of the Christian Democrats and speaker of parliament on April 18, voicing the opinion of some coalition leaders.

Another ruling MP, Ľubomír Lintner from the ANO, said he feared "the behaviour of Mečiar and his HZDS will change after the failure [in the presidential election]. His loyalty towards the coalition will be lost."

Some HZDS representatives, however, rejected the possibility of working with the coalition without their only leader, who has chaired the party ever since it was founded in the early 1990s.

"I can only say that [parties must work with] the HZDS with Mečiar or not at all. No one will dictate who should lead our party," Ján Kovarčík, HZDS deputy chairman, said to The Slovak Spectator.

Analysts agreed that if Mečiar turned against the coalition with his 26 MPs, he could cause it trouble, provided he joined with other opposition parties. Especially important could be an alliance with Smer, the second strongest opposition party, led by the ambitious Robert Fico. Fico was among the most active supporters of the recently failed referendum on early elections.

But an alliance between Mečiar and Smer was not likely, analysts said.

"One of Mečiar's traits is that he has developed a hatred towards Fico. I don't see how Mečiar could be more forthcoming towards Fico, especially bearing in mind that Smer supported Mečiar's rival Gašparovič in the presidential elections," said Soňa Szomolányi, political analyst at Bratislava's Comenius University.

"Mečiar does not forgive such things," she said.

This came as a confirmation of Szomolányi's expectations that pressure could be growing inside the HZDS against Mečiar, who earned a negative image as a PM whose policies took Slovakia into international isolation during his 1994 - 1998 cabinet.

Those who left the HZDS, including president-elect Gašparovič, confirmed that Mečiar acted in similarly authoritarian ways inside his own party.

But Kovarčík insisted that the HZDS "stands fully behind our chairman".

However, Maxon, the former finance minister under the last Mečiar government, has already dared to criticise Mečiar.

"I would be glad if the results [of the presidential election] strengthened the opposition, but unfortunately I have to state that the comments of our chairman do not suggest any such steps could take place," Maxon said to the Slovak daily SME.

Fico, meanwhile, took no offence at Mečiar's initial comments and said that Smer would approach the HZDS leader after "his head cools off" from his presidential failure.

According to Szomolányi, the results of the presidential election would not bring any dramatic threats to the coalition parties, which she thought could "complete their proper election term, maybe with a few changes in ministerial seats, with only the support of independent MPs".

"Even Hrušovský and Bugár, as well as the independent MPs, realise that early elections are not in their interest," Szomolányi said.

The same goes for the HZDS, which, despite winning national elections in 1998 and 2002, failed to find any coalition partners willing to cooperate and remained in the opposition.

"I would not fear very offensive politics from the HZDS either. The party will try to act as a constructive opposition member so that it finally gains some coalition potential," she said.