THE DIET of the communist regime and the early nineties, when Slovakia's access to the cuisines of other nations was limited mainly to three regional types: Czech with its vepřo knedlo zelo (roast pork with sauerkraut and dumplings), Hungarian dominated by gulyás (beef stew), and of course Slovak with its main representative bryndzové halušky (potato dumplings with special sheep's cheese and fried bacon), has ended. 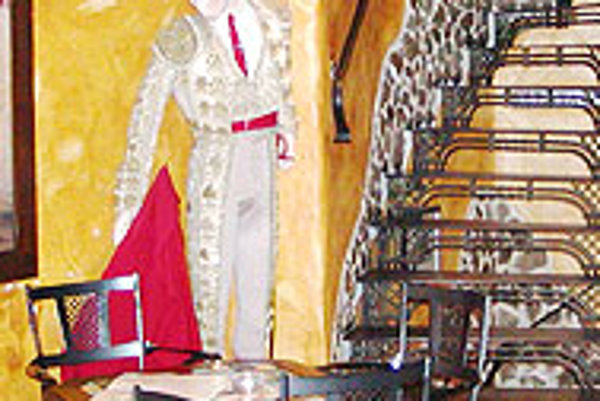 Font size:A-|A+  Comments disabled
THE DIET of the communist regime and the early nineties, when Slovakia's access to the cuisines of other nations was limited mainly to three regional types: Czech with its vepřo knedlo zelo (roast pork with sauerkraut and dumplings), Hungarian dominated by gulyás (beef stew), and of course Slovak with its main representative bryndzové halušky (potato dumplings with special sheep's cheese and fried bacon), has ended. The past decade has seen a boom of restaurants offering dishes typical of many countries and regions of the world.

Citizens and visitors in the Slovak capital - sometimes called, rightly or wrongly, "the beauty on the River Danube" - are, for their nights out, getting accustomed to a choice of European (French, Italian, Belgian, Irish...), Asian (Chinese, Japanese, Indian...), and North and South American cuisines. One of the latest international arrivals is the Spanish restaurant and bar Corrida de Torros on the Old Town's Laurinská Street.

Opened in 2002 in the presence of the Spanish Ambassador to Slovakia, Corrida aims to offer specialities of all Spanish parts of the Iberian Peninsula.

Its owner, Ľubomír Svitek, explained the motives that led to opening the restaurant:

"Our relationship with Spain and its culture began in the middle of the 1990s, when we had commercial activities there. Later this country endeared itself to us as a place for our holidays. We got accustomed to the local cuisine and culture, which is why, on opening a new restaurant in Bratislava, we decided to bring over a bit of this specific cuisine and culture, which, in Spain, go together inseparably."

In the preparatory stage, Corrida's owners consulted with the Spanish Embassy in Bratislava, which provided them with contacts to similar facilities in Europe. A Spanish restaurant owner and a chef from Vienna trained the chefs.

Now, after two years, Corrida de Torros is established on Bratislava's restaurant scene, and world-famous classics like tapas, tortillas, gazpacho, and paella have won the hearts of its guests.

However, some of the Spanish dishes had to be modified to reflect local dining habits. For example, many Slovaks would find the combination of chicken and seafood in paella a little bit strange, so the restaurant has decided to offer two versions of this traditional rice meal - chicken Paella Valenciana and seafood Paella de Mariscos. "It could be a bit of a surprise for some guests. For them, we are happy to prepare the original mixed recipe," said Alexandra Široká, who runs the restaurant.

Modifications have also been made to the tapas - small bites of food meant to be picked and mixed from the menu. "Some guests, unaware of this custom, could be a little bit shocked to receive a half-empty plate after ordering one item from the menu, therefore we serve each type in larger quantities," explained Široká.

"Nowadays, almost all ingredients necessary for the preparation of Spanish dishes are available in this country. The only exceptions are the typical Spanish chorrizo sausage and food colouring, which we buy in Vienna," added Široká.

Various types of Rioja dominate the restaurant's wine list. Apart from a number of other Spanish wines, it offers a selection of Slovak vintages from the Small Carpathian region of Pezinok in the southwest of the country. Not omitted from the list of cocktails is sangria, a mixture of red wine and bits of fruit.

Although Spaniards are not at all strangers to Corrida and they usually approve its cuisine, the main group of foreign visitors are English. "You can easily recognise the foreign guests, even if you do not hear the language they speak, by their different eating habits," said Široká, adding that "they order many courses and take their time to enjoy them. They could spend several hours here eating."