That's the way in Yiddish

Ot Azoy!
Preßburger Klezmer Band
Released by: Millenium Records
Price: Sk299
Available at: most music stores
WHO would have thought that Jewish music would become hip again? Sure, it has heavily impacted Western popular music - most notably 20th century musical theatre. But, after the emergence of blues, jazz, rock, techno, rap, etc, it seemed unlikely that it would return to the forefront. 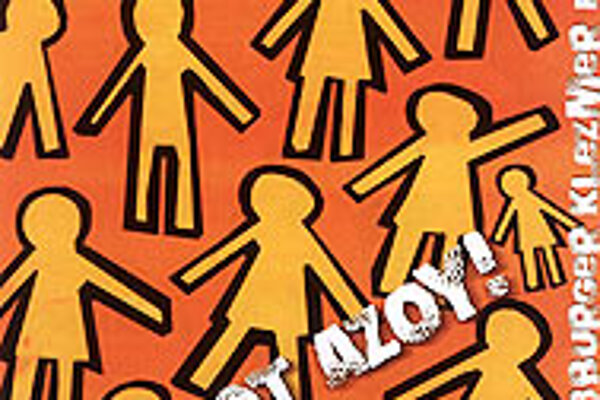 WHO would have thought that Jewish music would become hip again? Sure, it has heavily impacted Western popular music - most notably 20th century musical theatre. But, after the emergence of blues, jazz, rock, techno, rap, etc, it seemed unlikely that it would return to the forefront. And yet, though you won't hear it on mainstream radio or see it on MTV, it is thriving.

The form that has most benefited from this renaissance is klezmer, a clarinet- and violin-heavy tradition created by the many Jews who once lived in central and eastern Europe. Today, its exuberant dance rhythms can be heard throughout the world - both in traditional form and in experimental form, as in New York's avant-garde jazz scene.

Though somewhat cerebral, Bratislava's mostly traditional Preßburger Klezmer Band ultimately want to make you dance. Their energetic and celebratory live performances are some of the best to be found on Bratislava's music scene. They have no problem getting their message across, even if the majority of their audience doesn't know Yiddish.

However, as their recently released album Ot Azoy! (Yiddish for "That's the way!") shows, this energy does not fully translate to disc. Rather, it merely approximates what the group can achieve in a live setting.

This is not to say that it is not an enjoyable listen. The first two tracks, Ot Azoy Neyt A Shnayder and Tumbalalaika, a pretty waltz also featured in Slovak at the disc's end, strongly showcase the band's tight sound and lead vocalist Linda Ballová's lovely voice. The two-part Miserlou (no relation to Dick Dale's famed surf tune) aptly demonstrates the band's ability to shift speeds and feelings at will.

But klezmer should be experienced, not simply heard. This particular recording often dulls what would otherwise be intense and polishes what would have a sort of raw beauty.

Nevertheless, Preßburger Klezmer Band should not be ignored: They are a link to Bratislava's past, a time before the Nazis invaded and the Nový Most (New Bridge), which celebrates the national uprising, completely uprooted the once Jewish quarter. A time, one likes to think, when the streets of old Preßburg (name for Bratislava under Austrian rule) reverberated with these joyous rhythms and harmonies and the clack of dancing feet. A time before CDs were invented.