IT MAY seem slightly odd to call a movie about a chainsaw-wielding, cannibalistic, and homicidal maniac charming but, in its own unsettling way, Tobe Hooper's 1974 classic The Texas Chainsaw Massacre is just that. Sure, it's gruesome and disturbing and all that, but there is something about its simplicity that is undeniably appealing. 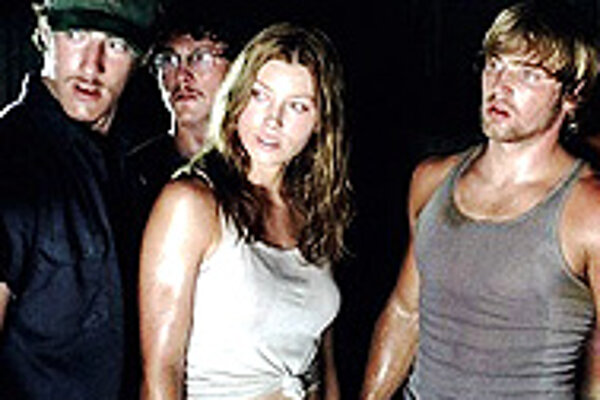 IT MAY seem slightly odd to call a movie about a chainsaw-wielding, cannibalistic, and homicidal maniac charming but, in its own unsettling way, Tobe Hooper's 1974 classic The Texas Chainsaw Massacre is just that. Sure, it's gruesome and disturbing and all that, but there is something about its simplicity that is undeniably appealing. But where Hooper's film is effortless, Marcus Nispel's 2003 remake is stilted.

Perhaps it seems too easy to criticize a remake for not living up to the original. And, indeed, they so rarely do that it is practically a foregone conclusion. Yet, though Nispel's film alters some of the characters and plot, it generally sticks to Hooper's template - ultimately doing nothing to be considered its own, unique entity.

And anyway, the original casts such a shadow over the horror genre that some comparison to it, or one of its peers (of which there are few), is inevitable. Nispel's film has the elements of any great slasher movie: gore, sadism, snotty teenagers doing stupid and/or illegal things and, most importantly, a pretty heroine who proves smarter and more resourceful than all those around her.

In this case it's Erin (Jessica Biel), who constantly manages to outmanouevre and outwit her bloodthirsty predator. Though bruised and bloodied, she is not easily defeated. And, crucially, she spends a great deal of time running, screaming, and - making sure not to subvert tradition - stumbling upon new and exciting ways to ensure her T-shirt retains its clinging wetness.

In all these respects Nispel's film stays pretty true to Hooper's. In fact, it has basically everything that any self-respecting slasher movie should. So what's the problem?

The original seems less like a meticulously planned work of cinema, and more like a happy accident: that an ambitious, somewhat perverse young man managed to scrape together enough money and round up enough friends that he decided to make a movie. And it turned out that he was really talented and everything just fell into place.

Nispel's film, by contrast, comes across as the careful work of a well-trained craftsman. It is polished and controlled where the original is gritty and chaotic. And this story proves to be best served with grittiness and chaos.

It does, after all, focus on a group of unfortunate teens that stumble upon a brutal serial killer, Leatherface, who - it just so happens - likes to dismember his victims, using their skin for arts and crafts and to mask his facial deformity. The barely contained anarchy of Hooper's film complements this nicely.

Though Nispel does use grainy cinematography at points, it is too obviously deliberate to be the real thing. More often than not, though, he seems to use his bigger budget to try to make his film more powerful and intense than the original, with its minuscule budget, could ever be.

It all has the distinct air of calculation - it may have all the right elements, but it tries so hard to maximize them that it drains itself of life. Like Leatherface, it may be all dressed up, but it doesn't really have anywhere to go.