President to please all

PRESIDENT-elect Ivan Gašparovič has outlined his general plans for the office, which include participation in the formation of the country's foreign policy, acting as an arbiter on the domestic political scene, and encouraging the nation to make the best of its EU membership.
At a press conference held on April 22, Gašparovič said that his aim in office was to "calm the political situation in Slovakia" and to ensure that abroad "Slovakia is seen and understood as a growing modern state."
"I am convinced that by joining forces we can manage to build a modern European country. 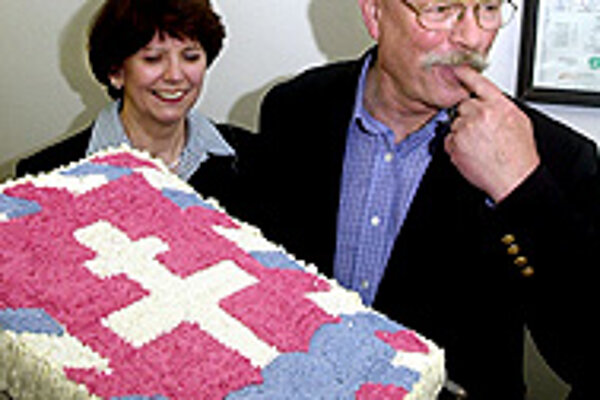 Font size:A-|A+0
PRESIDENT-elect Ivan Gašparovič has outlined his general plans for the office, which include participation in the formation of the country's foreign policy, acting as an arbiter on the domestic political scene, and encouraging the nation to make the best of its EU membership.

At a press conference held on April 22, Gašparovič said that his aim in office was to "calm the political situation in Slovakia" and to ensure that abroad "Slovakia is seen and understood as a growing modern state."

"I am convinced that by joining forces we can manage to build a modern European country. Let's not make a scarecrow out of the EU. We cannot, however, let ourselves be content with mere membership. The EU will not prevent us from, nor will it help us in, pushing through our national interests," said Gašparovič who described himself as "neither a Euroenthusiast, nor a Eurosceptic".

Gašparovič also said that he was in favour of keeping Slovak troops in Iraq to stop the spread of terrorism. That came as a surprise turn of opinion compared to his previous opposition to the deployment of Slovak troops to the region. The president-elect's statement also goes against the will of the people. A recent survey carried out by the Live! weekly magazine showed that as many as 75 percent of Slovaks wanted to see their troops pulled out of Iraq.

Gašparovič, a former member of the opposition party Movement for a Democratic Slovakia (HZDS), now leader of the non-parliamentary Movement for Democracy, said he would give up his political membership and try to act as an "arbiter for the people as well as the state bodies in a positive way".

"I do not want to become exclusively an interpreter of the people: I plan to work with the state bodies. I wish to eliminate the negative attitude [of the people] towards the cabinet when ministers do work that has a vision and positive impact on the country, even when this may seem temporarily negative to the citizens," he said.

Gašparovič also said he wanted to act as a mediator on the domestic political scene to try to find a greater agreement between the state and its citizens. He feels that the right-wing cabinet should be more sensitive to the impact of its reforms on the people.

"The reforms that the cabinet is making are necessary but they do not solve all the problems of the citizens. When people are driven into misery, that is not reform. I would be glad if the cabinet took steps to soften the impact of the reforms on the people and, on the other hand, I would ask that the citizens understand that the reforms are for their own good."

He also said that he would not misuse the presidential right to veto laws.

"I will not return laws at any price and without prior consultation with those who created them," he said.

Gašparovič said that, unlike his predecessors, Michal Kováč and Rudolf Schuster, he wanted to keep his presidential right to sign international treaties, arguing that the ruling parties and the opposition often fail to find common ground on foreign issues.

"I will gladly give up the right when it is proven that they are able to agree on these treaties."

That statement surprised politicians as well as analysts, as it has been a tradition in Slovakia that the president gives up this right to the cabinet, which is seen as the bearer of the state's foreign policy.

Pavol Kubovič, a member of the ruling Slovak Democratic and Christian Union said he believed that Gašparovič would later change this decision and leave the right to the cabinet. HZDS MP Irena Belohorská and coalition MP Ľubomír Lintner agreed that the presidential office lacked the capacities to be able to deal with international treaties, and that Gašparovič's statement was probably the result of "election campaign tiredness".

A matter of the past

Although Gašparovič's general goals were cautiously presented in a positive light in the Slovak press, critics continued to point out that he, in effect, is just the same as the man he beat in the presidential duel - former PM Vladimír Mečiar.

Slovak Deputy PM for EU Integration Pál Csáky said in a recent interview with the European Voice weekly that, while in the HZDS, Gašparovič was number two after Mečiar, which makes him "responsible for the political problems of Slovakia" between 1994 and 1998.

The country was internationally isolated under the third Mečiar cabinet due to the perceived authoritarian nature of his cabinet and its lack of commitment to democratic values respected in the West. As a result, the state was excluded from the EU and NATO enlargement processes. Gašparovič was speaker of parliament at that time.

Interior Minister Vladimír Palko from the ruling Christian Democratic Movement agreed. When explaining in a televised discussion on the private Joj TV on April 25 why he thought Gašparovič would not behave according to the wishes of Smer - the opposition party that, among other political groups, supported his candidacy - Palko said: "I think he will behave as he has always done. He will do what is the most advantageous for him so that he keeps a good position for himself."

"If there was justice, the public image of Mečiar and Gašparovič would be the same," he added.

Whether Gašparovič proves his critics wrong will only show after he takes office on June 15.