SLOVAK fans filling the nearby Ostrava stadium in the Czech Republic can be fully satisfied with their team's performance so far at the World Ice Hockey Championship 2004. To their thundering support, the Slovak hockey players advanced to the qualifying round from the first position.
After defeating Ukraine 2:0, and then tying the US 3:3, the Slovak team came up against the Finnish team, which, unbeaten, seemed to have the lead in the B division. But Slovakia's 5:2 triumph over Finland in the last match of the preliminary round shuffled the results. 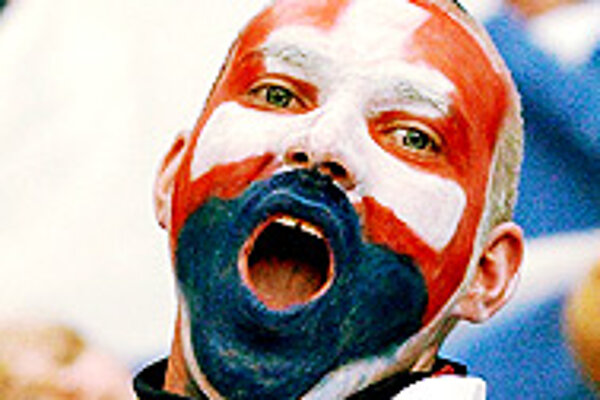 Font size:A-|A+0
SLOVAK fans filling the nearby Ostrava stadium in the Czech Republic can be fully satisfied with their team's performance so far at the World Ice Hockey Championship 2004. To their thundering support, the Slovak hockey players advanced to the qualifying round from the first position.

After defeating Ukraine 2:0, and then tying the US 3:3, the Slovak team came up against the Finnish team, which, unbeaten, seemed to have the lead in the B division. But Slovakia's 5:2 triumph over Finland in the last match of the preliminary round shuffled the results.

"It seemed as if we were in a power play the whole match. The audience was our sixth player and I believe that they will keep supporting us," forward Pavel Demitra said to the daily Pravda, summing up the atmosphere at the Ostrava stadium.

The Slovak team moves on to play Russia, Denmark, and Sweden. The second qualifying round is formed by the Czech Republic, Canada, Austria, Switzerland, Latvia, and Germany. The hosting Czech team moves ahead with the maximum number of points: four.

The Slovak fans that attend the matches and those watching at home or in the pub have high expectations for their national team. With the country's independence in 1993, it split from the strong Czechoslovak ice hockey tradition. The Czech team remained in the top tier, but their Slovak counterpart started out in the bottom C division. But by 2002, the Slovak team climbed all the way up to the gold. Last year, though unable to repeat the victory and ending up with the bronze, they marked another triumph - beating their former teammates, the Czechs.

Before this year's championship opened, Peter Šťastný, the general manager of the Slovak National Hockey Team, prophesied that "everybody is going to be our rival [in the preliminary round], as we ended up in a group with strong players: Ukraine, the US, and Finland".

"Of the top seven teams in the world, five of them compete in our group [including Slovakia] before entering the finals. After advancing from the preliminary round, we get to join the pool with Sweden and Russia. And only four teams can qualify for the quarter-finals. Therefore, each game is going to be difficult, as we need to score as high as possible, and certainly among the top four," he told The Slovak Spectator.

The team's coach, František Hossa, agreed: "It is very hard to choose which team I'm most afraid of because all seven teams are very good."

According to Šťastný, the championship seems to increase in quality every year, and despite the fact that some of the best players in the world will come from the NHL to play for their national teams, the Slovak team proves strong.

"Slovakia doesn't have as many players as some other countries [to choose from for the tournament] but luckily, in the past few years we've been getting more players every year. Even though some good players won't come to this championship because they're injured [such as forward Peter Bondra, ed. note], we still had a reasonable pool of players to choose from," he said.

How prepared is the Slovak team?

We want to achieve satisfying results and make people in Slovakia happy. I feel ready for the championship. I've been working hard and getting ready mentally and physically. Hopefully I can show my best at the World Championship.

Every team is going to be pretty good at the World Championship because they're going to have players from the NHL. However, I think that the most dangerous will be the Czechs, as they are playing at home, giving them the home field advantage, but each team will be challenging, including the Russians, Canadians, Finns, and Swiss. We're going to have to prepare ourselves.

We'll have to play good defence in the [first preliminary round] match against Ukraine and not make any mistakes. Regarding the US and Russia, those are two strong opponents who'll definitely have great players from the NHL.