Opponents up in arms

SLOVAK involvement in the US-led mission in Iraq has become a much-discussed issue in Slovakia, and one that is only growing, as members of the ruling coalition recently joined the voices of doubt.
The ruling Christian Democrats, who one year ago voted against the deployment of a Slovak contingent of about 100 soldiers in Iraq, have openly declared that the presence of Slovak military engineers there should be investigated and gradually terminated. 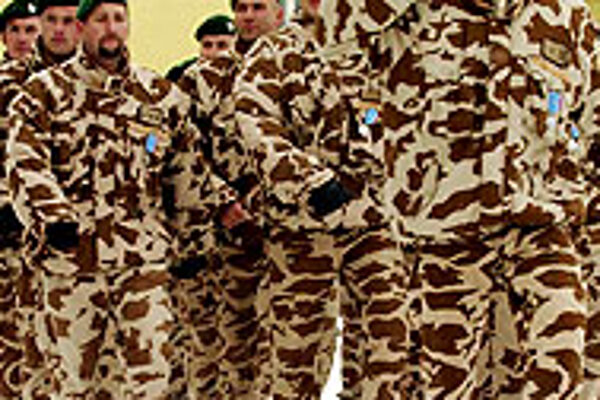 Font size:A-|A+0
SLOVAK involvement in the US-led mission in Iraq has become a much-discussed issue in Slovakia, and one that is only growing, as members of the ruling coalition recently joined the voices of doubt.

The ruling Christian Democrats, who one year ago voted against the deployment of a Slovak contingent of about 100 soldiers in Iraq, have openly declared that the presence of Slovak military engineers there should be investigated and gradually terminated.

Slovak Interior Minister Vladimír Palko, a Christian Democrat, said recently during a TV discussion show on the private news channel TA3 that his party would call for the cabinet to submit a report evaluating the Slovak military mission in Iraq.

Palko said that his party was interested in finding out whether the mission had fulfilled its goals and what its next tasks were.

"Everybody knows that the deployment of Slovak soldiers in Iraq was a mistake but not everyone is willing to admit it," Palko said on May 2.

He said that, though he was convinced of the error of Slovakia's military involvement in Iraq, that did not mean the military engineers should be pulled out immediately.

The Slovak Communist Party, also in the opposition, has been critical of the Slovak presence in Iraq from the very beginning and recently demanded that the cabinet and Defence Minister Juraj Liška submit a proposal to parliament to immediately withdraw Slovakia's forces.

But amid the announced withdrawal of the Spanish troops from Iraq, Slovak PM Mikuláš Dzurinda continues to defend the presence of the Slovak soldiers. He has stated several times that the withdrawal of troops was not under consideration.

"We should not be cowards. On the contrary, we should continue to be members of the international coalition that decided to wage a victorious fight against terrorists," said Dzurinda at a recent discussion forum organised by the economic daily Hospodárske noviny.

"It is impossible to negotiate with terrorism, or to achieve an agreement or a compromise, because they would backfire. I think it is necessary to show strength, morale, courage, and wage that fight and win it," said Dzurinda.

Slovakia's president-elect, Ivan Gašparovič, who will take his post on June 15, said in an interview with the AP shortly after his election that the Slovak troops should stay in Iraq.

"Would it be better to withdraw in defeat from Iraq and leave terrorists with free hands or prevail and do everything possible to stop terrorism from spreading?" said Gašparovič, a former opponent of the deployment.

Popular opinion sides with the opposition. A survey released at the end of April by the weekly magazine Live! showed that 75 percent of respondents wanted the troops withdrawn.

Juraj Tomaga, the Slovak Foreign Ministry spokesman, told The Slovak Spectator on May 3 that the ministry "has no problems whatsoever with discussing the Slovak mission in Iraq and when an official proposal is made asking for the report, we will prepare it."

"I have to say, however, that currently the withdrawal of soldiers is not being considered at all," Tomaga said.

From across the Atlantic, Slovakia has already received several thank-yous for its support of the US mission in Iraq. A few months ago US President George Bush thanked Slovak President Rudolf Schuster for his country's support, and more recently US Secretary of State Collin Powell sent a letter of thanks to Foreign Minister Eduard Kukan for Slovakia's continued support of the anti-terrorist alliance in the effort to achieve "stability and a new future for the Iraqi people".

According to Palko, the best way to help the Iraqis would be for the alliance to give them direct power, after which the Slovak soldiers, who are mainly active in clearing Iraqi minefields, could return home.

In a press statement, Liška said that he was prepared to discuss the issue of Slovak soldiers in Iraq "on the basis of rational arguments set in an international context".

The minister also said that he did not consider it to be a mistake that "thanks to the anti-terrorist coalition, the world got rid of a tyrant who used chemical weapons against his own people, suppressed human rights, ignored United Nations resolutions, and supported international terrorism."