The new benefits and costs of membership

CHEAPER French wine and more expensive Asian rice, ID cards in place of passports, the free movement of persons and goods - these are just some of the changes that Slovaks face in the European Union.
With a blaze of fireworks and street celebrations, the EU threw open its gates to 10 new members, including Slovakia, on May 1. 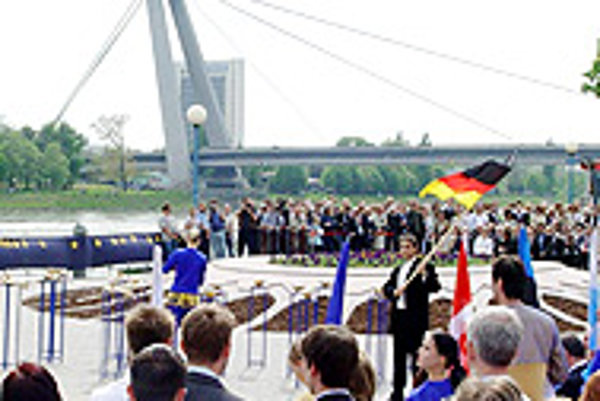 Font size:A-|A+0
CHEAPER French wine and more expensive Asian rice, ID cards in place of passports, the free movement of persons and goods - these are just some of the changes that Slovaks face in the European Union.

With a blaze of fireworks and street celebrations, the EU threw open its gates to 10 new members, including Slovakia, on May 1. Following days of jubilation, Slovaks will gradually begin to experience the changes EU membership brings to their everyday life.

One of the most important benefits Slovak jobseekers had been anticipating prior to the entry was free movement, particularly for workers.

However, just months before enlargement, most western European countries decided to continue their work permit regimes. Despite this, Slovak entrepreneurs have the freedom to do business in any member country and customs fees have disappeared.

Slovak students have gained the right to study at any of the union's schools, under similar conditions as their fellow pupils in the given country.

For several professions the universal recognition of university diplomas is automatic; Slovak nurses, dentists, physicians, architects, and pharmacists abroad can take advantage of their qualifications obtained at home.

Another important advantage of membership is already noticeable: Slovak citizens do not need to carry their passports when travelling to an EU member country; ID cards suffice for this purpose.

The Slovak Spectator verified the eased crossing procedure on May 2 at the Komárno-Komárom border between Slovakia and Hungary, where either document could be used. Many souvenir-seeking travellers, however, were using their passports to receive the new stamp with the 12 stars representing the EU.

Due to the NATO parliamentary session scheduled for the end of this month in Bratislava, however, inspection at some of Slovakia's borders has remained thorough.

On May 3, Slovak authorities began issuing new drivers' licences and licence plates decorated with the symbol of the EU. Similarly, new passports will be issued soon.

Many feared that accession would immediately result in rising prices. Indeed, the prices of merchandise imported from non-EU countries have or will increase. Sugar, rice, bananas, and Asian products such as bicycles will be more expensive. In response, Slovaks have begun stocking up reserves of such products. The price of cigarettes has already risen; a further increase is expected later this year.

Due to the union's Common Agricultural Policy, EU-produced beef and poultry may gradually become more expensive.

However, European - particularly high quality French - wine is already cheaper in Slovakia than it was in April and the price of Belgian chocolate is expected to drop, too. Consumer electronics and vegetables - particularly potatoes - and fruit coming from EU countries will also be cheaper.

Vacationing in Slovakia will be more expensive this year. According to Róbert Kohlmann, president of the Slovak Association of Travel Agencies, the increase in prices may reach 15 to 25 percent.

Those Slovaks planning a trip to another member country will now need to fill in a special form for medical insurance that will cover expenses abroad. Slovak nationals are entitled to free emergency operations, plaster casts, baby deliveries, and dialysis treatments.

Due to changes in the categorisation of pharmaceuticals, some drugs have become more expensive; overall, prices have increased 2.5 percent.

Many find it discriminatory that farmers in the new member states will receive subsidies four times smaller that those of their colleagues in the West. However, all farmers are entitled to agricultural subsidies for the first time.

Almost 78 percent of Slovaks welcome the country's EU entry, while 18 percent are opposed to it, a recent public opinion poll revealed.