WELCOMING the enlargement of the European Union through sport is the idea behind a new event starting May 15 on the section of the Danube between Bratislava and Vienna.
Eight-person rowing shells from surrounding countries will compete at the Ferdinand Martinengo Memorial, named after the founder of the first rowing club in Bratislava. 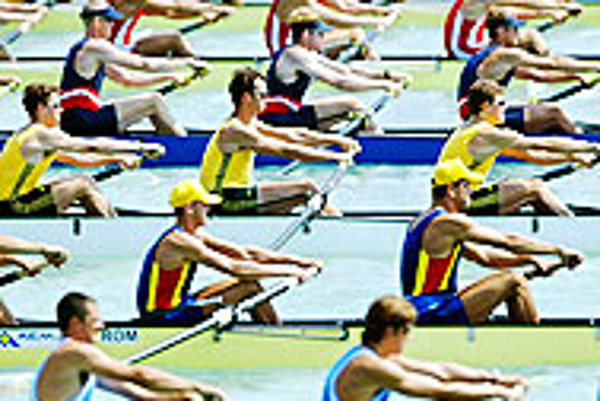 WELCOMING the enlargement of the European Union through sport is the idea behind a new event starting May 15 on the section of the Danube between Bratislava and Vienna.

"It's the voice of citizens proclaiming the message of a joined Europe," said organiser Peter Kurhajec from the Ferdinand Martinengo Association, the initiator of the project.

"When they approached us, we felt exalted by the idea," said Marek Reich, the rowing union's chairman. "Rowing is perhaps the only sport in Slovakia that has the chance to bring about such cooperation. The first year will probably not be about winners but about founding a certain tradition."

So far, around 15 boats from Poland, Hungary, the Czech Republic, Austria, Croatia, and Slovakia have announced their participation in the event. The number is lower than what the organisers expect next year, as rowers are currently getting ready for the Olympics. Canoeists will also join the race and so can spectators.

"Everybody, rowing or not, is equally welcome," said Kurhajec, who received the Pope's blessing for this activity.

The Slovak Spectator (TSS): Will the Memorial of Ferdinand Martinengo become a new tradition on the Danube River?

Peter Kurhajec (PK): Yes, we would like it to. Traditions like this were frozen by the Iron Curtain and now, with the borders being removed, it is easier [to organise them]. We decided to [join Europe] through sport.

The event is one of sport, culture, and humanity. With respect to the cultural events, we want to remember our fellow citizens, mainly children, who suffer from health problems.

PK: Yes, in this case it is not only about removing physical borders but also mental. Physical concerns the borders between Austria and other countries; mental means the removal of barriers between people who are disabled and those who are not disabled.

PK: Yes, in this case it is not only about removing physical borders but also mental. Physical concerns the borders between Austria and other countries; mental means the removal of barriers between people who are disabled and those who are not disabled.

TSS: The event takes place a few days after EU enlargement. Why did you choose that date?

PK: Well, not everything can be done on May 1, and we too wanted to celebrate the country's entry to the EU.

TSS: Starting next year, why did you decide to move the event to the autumn?

PK: The oarsmen asked us to do that because in May they are starting the season and busy preparing for competitions. This year, for example, they are training for the Olympics, so the top athletes cannot come. But if it is after the season ends, we can expect many to participate. It could turn into a great tradition.

TSS: To whom is the first year of this tradition dedicated?

PK: We would like to dedicate it to Count Richard Coudenhove-Kalergi, an aristocrat who very actively supported the idea of bringing Europe together after the first world war, and also the father of Europe, Robert Schuman. Schuman was of French and German origin; he was the French foreign affairs minister and a founder of a French-German coal-steel company, formed between the two biggest enemies of that time.

TSS: Why does the competition not take place the other way, against the current from Bratislava to Vienna?

PK: On May 1, 1900, my grandfather and his four friends rowed against the current from Bratislava to Vienna. It took them 18 hours; the act was captured in the newspapers. Where they finished [in Freudenau], we will now start.

The reason we do it this way is because we want to hold the main celebrations here, in Bratislava [at St Martin's Cathedral and in the Propeler area on the Petržalka side of the Danube, ed. note]. Maybe later, we will do it in Vienna as well, but the other reason is that we cannot strain [the visitors' attention] too much; it must be smooth and quick. This way it will take around three-and-a-half hours.

TSS: Was it your grandfather's act that inspired you to found this tradition?

PK: Well, I knew that he did it. He described the route they took and who was on the team in a diary we keep at home. When the mayor of Vienna greeted him, he shook his hand while bent over, as he couldn't stand up straight. They went against the current.

I was thinking about creating something we, as citizens, could endorse. And the facts that Vienna and Bratislava are the closest capitals and the Danube is a big European river demanded that we create something out of them.

On November 17, 1989, I participated in sport competitions in Vienna, where I handed the mayor a bell with the seal of Bratislava on one side and that of Vienna on the other. I rang it and said, "I hope it rings to the time when there are no borders". And now it has happened. That's why bells are a symbol of this event.

TSS: Your grandfather conquered the distance in a four-person team. Why did you decide on an eight-person rowing shell?

PK: Because [an eight-person boat] is harder to [coordinate] and it is faster on the river. It is also a symbol of companionship, as there are eight people - nine with a coxswain - who must pull together.

8:00 Cyclists and historic cars meet in front of the Slovak National Theatre

8:20 Participants of the event gather in front of the Slovak National Museum

9:00 The boat Meteor and buses with the guests, and historic cars leave for Vienna

11:30 Meteor travels to Freudenau, where the eight-person teams will start the competition; buses return back to Bratislava

12:30 Start of the eight-person shell race, followed by other sport and tourist boats, including Meteor

13:30 Landing in Bratislava, at the Integration Mound (near the Osobný prístav)

14:30 Buses carry the visitors to Aušpic, to welcome the competing rowers

15:00 Culture programme on the Petržalka side of the Danube, including fencing shows, dance and music performances, historic-car parades, craft demonstrations, and performances by physically disabled children from Slovakia and Austria

18:30 Transfer to Rusovce, a programme by the Slovak Folk Art Collective (SĽUK)

20:30 Announcement of the results, fireworks