The age of love

Something's Gotta Give
Starring: Jack Nicholson, Diane Keaton, Frances McDormand, Keanu, Reeves, Amanda Peet
Directed by: Nancy Meyers
Running time: 128 min
Rating: 7 out of 10
AGE doesn't matter, right? At least it's not supposed to. Assuming everyone is of legal age, who really cares how much older or younger a potential partner is, as long as there is mutual and genuine attraction? 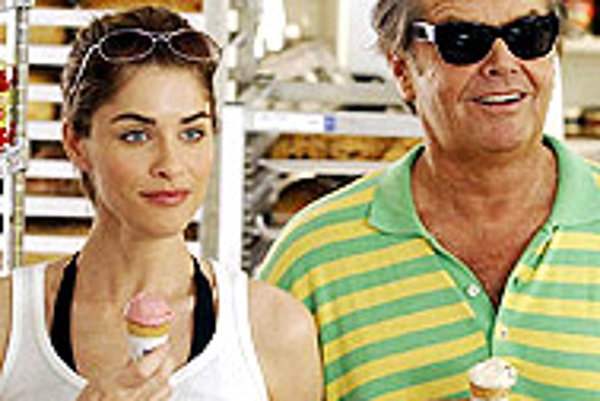 AGE doesn't matter, right? At least it's not supposed to. Assuming everyone is of legal age, who really cares how much older or younger a potential partner is, as long as there is mutual and genuine attraction? As it turns out, many people do. Nancy Meyers, the writer and director of Something's Gotta Give, is fully aware of this. In fact, her film seems to say, she cares herself.

The movie begins with a long-standing Hollywood tradition: the older man and the younger woman. Harry Sanborn (Jack Nicholson), an aging playboy with a reputation for only dating younger women, is taking Marin (Amanda Peet), the latest in his collection of nubile young conquests, for a tryst at her mother's house in the Hamptons (where New York's elite "summers").

But what they do not realise is that Marin's mother, Erica (Diane Keaton), a neurotic, recently divorced playwright, plans to stay the weekend with her sister Zoe (the always great Frances McDormand), a Women's Studies professor.

Unsurprisingly, the meeting of the two parties brings conflict. After at first thinking that Harry is a burglar, Erica seems scarcely relieved when she learns that he is actually dating her daughter. After some hesitation, they all decide to stay for the weekend.

This leads to awkward discussion about Harry's romantic history. Although it has lasted for about 40 years, it solely involves women of the same age group - his age about 35 to 40 years earlier. Erica sees him as pitiful and immature; Harry sees her as uptight and annoying. Naturally, this means love.

After Harry suffers a heart attack, he and Erica find themselves alone in her house. They bicker, they stumble upon one another in compromising positions, and, of course, they inch closer and closer to ending up in bed together.

Meanwhile, Harry's attractive, young doctor (Keanu Reeves) fervently pursues Erica. Obviously, the filmmakers chose Reeves for his ridiculous beauty, but they also likely chose him for his famously limited acting skills. It's crucial that this doctor not out-charm Harry, lest the premise of the entire film - that Harry and Erica must be together - be unbelievable.

But this almost happens. Reeves' character is so sweet, so honest, so completely taken with Erica, and just so damn pretty that one cannot help but wonder why she would think twice about running off with him. The official explanation is some unconvincing blather between Harry and Erica about "soulmates" and "you're the only one who ever got me". The real reason it just manages to work, though, is Nicholson and Keaton.

They have an organic chemistry that makes their getting together seem inevitable, even when everything else makes it seem unlikely. Nicholson doesn't have to try to be a lecherous charmer - that's what he actually is. And no one can be lovably neurotic like Keaton. They keep the film funny and entertaining, even as it almost becomes trite melodrama.

Meyers seems confused in what she wants to say about age and love. She seems to say it matters even as it doesn't. Luckily for the film, Nicholson and Keaton, ensure it doesn't really matter at all.