IT WOULD be good for Slovakia, immediately after its entry to the EU, to demonstrate that its citizens are interested in EU affairs and that they are sending their best representatives to Brussels, said Deputy Prime Minister Pál Csáky in an interview with The Slovak Spectator.
The Slovak Spectator (TSS): The chairman of the Office of the European Parliament (EP) in Bratislava, Azelio Fulmini, expressed concerns about the potentially low turnout in the elections to the EP. Do you share his concerns? Do you think that citizens are aware of the importance of these elections? 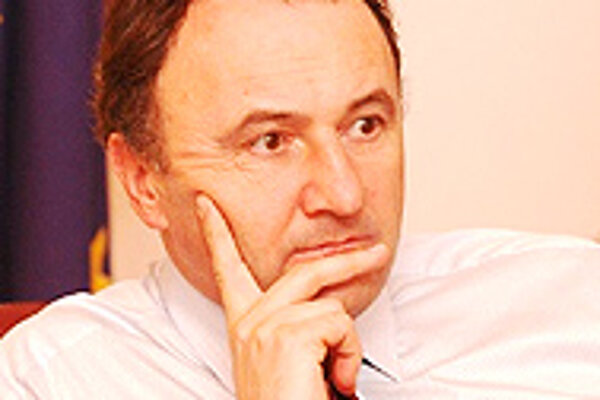 Font size:A-|A+0
IT WOULD be good for Slovakia, immediately after its entry to the EU, to demonstrate that its citizens are interested in EU affairs and that they are sending their best representatives to Brussels, said Deputy Prime Minister Pál Csáky in an interview with The Slovak Spectator.

The Slovak Spectator (TSS): The chairman of the Office of the European Parliament (EP) in Bratislava, Azelio Fulmini, expressed concerns about the potentially low turnout in the elections to the EP. Do you share his concerns? Do you think that citizens are aware of the importance of these elections?

Pál Csáky (PC): It seems to me that it is a European trend for elections to the European Parliament to have a lower turnout than elections to national parliaments. Certainly, I worry that this trend might also become Slovakia's reality. I am concerned that our citizens are weary of the different election procedures that they have been exposed to over the past couple of months. I have in mind the two rounds of the presidential elections and the [void] referendum on early elections.

Perhaps the factor that pushes down the turnout in other EU candidate countries is that citizens consider the bodies of the EU something more distant than their national bodies. This factor might also have an impact on Slovak citizens.

TSS: Would a low turnout in elections to the EP have any practical consequences for Slovakia?

PC: I personally view it in the context of other EU member countries, where the situation is very similar. I do not assume there would be any serious damage to Slovakia's image. However, it would transmit a signal that Slovak citizens do not believe that EU bodies have a direct impact on their lives. This would be unfortunate. It would be good for Slovakia, immediately after its entry, to demonstrate that its citizens are interested in EU affairs and that they have sent their best representatives to Brussels. We will have 14 of the 732 deputies there. It would basically come back to haunt us if we failed to send our best representatives.

TSS: Does the government plan any campaigning?

PC: This is a very sensitive issue for every government. We can only proceed in line with the law, which does not allow us to enter the process, which basically is a fight between different political parties. The government itself consists of concrete political parties that are participating in the election process. Any activities on the part of the government would evoke suspicions that the ruling coalition parties want to benefit from their position, not to even talk about financing these activities from state funds. The cabinet will be very restrained in this issue. We will call on citizens to turn out, but nothing more, so that there is not the slightest sign of trying to influence the results of the elections.

TSS: At its May session, the parliament must definitely approve the anti-discrimination law. What are the chances that this crucial legislation will be passed?

PC: The law has been discussed in several parliamentary committees and I personally attended most of the discussions. I was pleasantly surprised that even opposition parties supported the law, while deputies of the Christian Democratic Movement [KDH, the strongest opponent of the law] and the Communist Party abstained from voting. In one case a KDH deputy even voted for the law, which I considered a very good sign. From the very beginning, I have been calling on the deputies not to mix politics with this public matter. I think that our legislative system and even Slovak life will become more civilised if such a law is passed.

TSS: The KDH is pursuing a new constitutional law that would oblige the cabinet to follow certain procedures during negotiations with EU institutions. What are the chances such a law will pass? Will the Hungarian Coalition Party support it?

PC: I am afraid that the initiative is based on negative experiences in the relationships between the cabinet and parliament. It seems that in the past the parliamentary deputies got the impression that they were left out of the process and they criticised the cabinet for taking certain steps. I generally understand the initiative of the deputies who want to be fully involved in the legislative processes at the level of the EU. However, I am afraid that the mechanism that they propose will be quite inflexible and will delay us on an international level. What they are proposing is an even tougher model than the Denmark regime. The Danish government has already had some problems with its model; during the sitting of EU bodies, the Danish representative cannot take a stand on certain issues until he or she has received the mandate of the Danish parliament. It is a system that slows down the function of the whole system.

TSS: You prepared a report on Slovakia's readiness to draw EU funds by March 2004 that was submitted to the cabinet on May 13. What are the most important findings of the report?

PC: It seems that the structures that Slovakia was expected to build by May 1 are functional. The calls for submissions of concrete projects have already been made. However, we are sometimes still not aware of the time frame of these processes. Some of the ministries are not very flexible in submitting and preparing their visions and evaluating the projects. This all calls for permanent control and increased coordination. This material serves to warn those who are still late.

TSS: What authority will the new parliamentary committee for EU affairs have?

PC: In February I submitted a proposal to Mr [Pavol] Hrušovský [speaker of parliament] on cooperation between the cabinet and the committee. I think that the main stress should be put on the preventive character of the committee and to make sure that the body has enough information so that it can take a stand in advance.

TSS: Over the past couple of months, foreign journalists have frequently visited Slovakia, devoting the most attention to the Roma community. There were several stories published by the British tabloid press suggesting that the Slovak Roma might seek work in Great Britain en masse.

PC: As a member of the cabinet, I would restrain from criticising media coverage of this issue. I always ask the media, whom I consider a serious partner in public life, to write serious stories. Unfortunately, it seems that it is easier to find the negative aspects of the lives of the Roma; they might journalistically be more attractive topics than some of the positive examples. This could give the impression that some of the media are trying to unfairly influence public opinion.

Some stories disseminated by the British press about the Slovak Roma invading Great Britain were inappropriate and unfounded and perhaps served some political fights. The issue is sensitive and I think it is very unfortunate when someone tries to abuse latent prejudices among the people in EU countries. This is one of the reasons I am submitting the anti-discrimination bill as well as an action plan against all forms of intolerance, discrimination, racism, and anti-Semitism.

TSS: Mr Csáky, your tasks for Slovakia's entry to the EU are not over. What are the remaining legislative shortcomings that need to be erased and the problems the cabinet must solve in association with EU membership?

PC: We still have to submit eight laws to the parliament that, according to the last European Commission report, are still missing. I would mention the law on retail chains, which provoked an intense debate. Slovakia will have to continue adjusting its legislation to EU laws. This process will certainly need a coordinator. We are also preparing for the financial period 2007 - 2014; this preparation also needs a coordinator and the parliament and the cabinet will need a person to synchronise their activities. I am continuing on the agenda of human rights and national minorities, including the anti-drug fight.