No borders no problem

THE EUROPEAN Union should bring customers in the new member states tangible advantages on the express delivery services market.
Insiders say that clients can expect lower prices and faster deliveries.
Customs procedures at Slovak-EU borders were abolished from May 1, meaning customers can now avoid chronic customs delays. Consignments within the EU can now get to clients without any procedures, which saves time and cost. 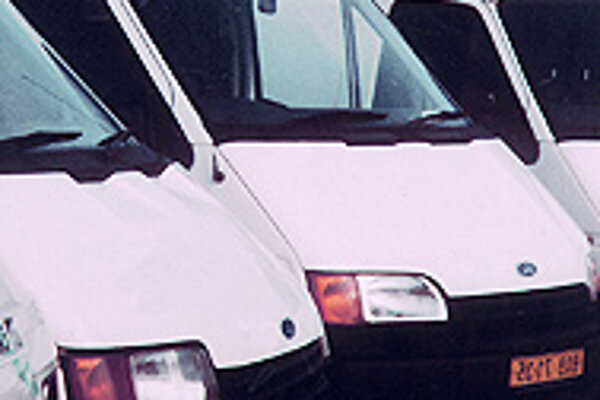 Customs procedures at Slovak-EU borders were abolished from May 1, meaning customers can now avoid chronic customs delays. Consignments within the EU can now get to clients without any procedures, which saves time and cost.

"In most cases the delivery time will be from 5 to 24 hours shorter, which means we will be able to deliver shipments on the day they arrive in the country. Our operations will remain the same; we will only shorten the delivery time," said Mária Džundová, the Slovak marketing and sales manager of TNT International Express.

In Bratislava, the delivery time will shorten by anywhere from 5 to 12 hours, she continued. Customers outside the capital will feel even more benefits. They will be able to get air consignments on the day of their arrival, which gives them an extra day.

Firms can now deliver goods - before subject to stricter customs rules - within the EU under conditions identical or similar to documents. Delivery companies will be able to offer products with time delivery guarantees for goods, which was previously possible only for documents.

Pavel Žarnovičan, marketing director of UPS, added that the number of consignments that can now be delivered to a customer immediately after their arrival in Slovakia has increased four-fold. "The delivery of goods will get significantly faster and prices will decrease as well, mainly thanks to the cost savings from the lack of customs procedures," he continued.

"Shorter delivery time, especially in road traffic, will be a direct result of the abolishment of customs procedures at borders," said Katarína Bolgáčová, marketing manager of DHL.

She added: "The actual duration of air deliveries will not change, but the preparation of documents required for air transport in the EU will be less time-consuming. In practice, this will mean earlier delivery"

Apart from customs changes, EU accession also brings amendments to the administration of value-added tax (VAT) for deliveries and the manner of collecting statistical data for Slovak foreign trade.

Delivery companies and their customers will have to get used to the new system.

All consignments coming to or leaving EU territory are now subject to 19 percent VAT. The previous duty to submit transit customs declarations in paper form has been replaced by the New Computerised Transit System.

Additionally, the EU system Intrastat was introduced to measure the inbound and outbound transfer of goods.

Some delivery firms will thus offer to take care of all communications with customs offices and the complete administrative agenda related to submitting Intrastat declarations.

The majority of leading express delivery companies began preparing themselves for the new legislation last year. The situation got a bit more complicated when the Slovak parliament adopted some of the needed amendments only in April 2004, when they had to take effect in May.

"We had been preparing for these changes since February 2003. We did not consider it a step into nowhere. We have learned from the experience of countries that entered the EU before us, like Austria, Spain, and Portugal. We solved the issue first at the top level and then through individual projects," said Džundová.

"We are also trying to help our clients get used to new procedures in deliveries, administration, and statistics. Our workshops and seminars on this topic were popular," she continued.

Express delivery companies expect that the abolished border restrictions will develop and improve new delivery routes to the Baltic states and other new EU members.

"We expect a gradual increase in shipping volume in relation to economic growth and the arrival of new investors. However, we do not suppose it will happen overnight," said Nikita Čebotarev, business development manager at FedEx BTS Slovakia.

As for Slovakia, Džundová from TNT is waiting for significant growth in express deliveries to destinations that are traditional Slovak business partners, like Germany, France, and other EU15 states. In terms of the world market, routes to southeast Asia are attractive.

She also sees great potential in cooperation between Slovakia and its nearest neighbours - Austria, Poland, and Hungary.

"In the past, cross-border cooperation was much discussed. But it just wasn't happening, maybe except for the Czech Republic. The EU could bring change. I think these destinations have some of the greatest prospects for Slovakia," she said.

Žarnovičan from UPS said that full involvement in the EU market might bring more fierce competition for express delivery companies: "We definitely expect growth in shipments not only from EU countries to Slovakia but also the other way around.

"A customer has the opportunity to alter his or her choice of a delivery firm depending on, for example, time constraints. Sharper competition will be a logical result of customer and market behaviour," he added.

However, insiders do not expect extreme competition between global delivery companies, as they have already found their place on the Slovak market. But smaller delivery firms could be a different story.

"Our experience from the countries that entered the EU before Slovakia says that we might soon see a boom in small delivery firms. Their primary competitive advantage will be price," Džundová said.

"But when it comes to the special requirements of a client - like special deliveries during holidays, special destinations, and increased reliability - as well as the fact that a delivery firm can help a client impress his or her business partners, local delivery firms could face problems with keeping high standards," she explained.