THE TIME when Slovaks could travel from Bratislava's M R Štefánik airport only to the Czech capital of Prague or to the eastern Slovak city of Košice is over. Almost every year, the airport welcomes a new air carrier and announces new destinations.
Recent numbers of transported passengers and cargo show that Bratislava airport's efficiency increases every year. In 2003, 480,000 passengers travelled through M R Štefánik. 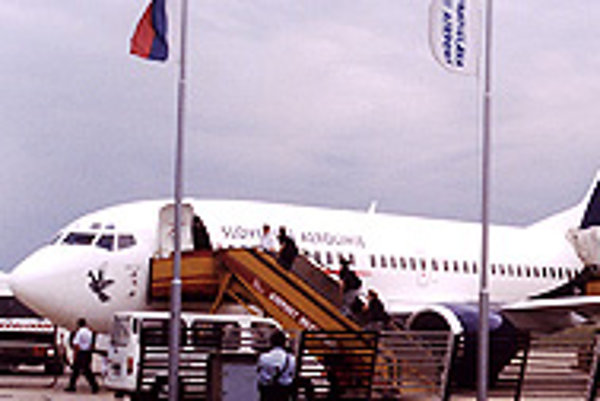 Font size:A-|A+  Comments disabled
THE TIME when Slovaks could travel from Bratislava's M R Štefánik airport only to the Czech capital of Prague or to the eastern Slovak city of Košice is over. Almost every year, the airport welcomes a new air carrier and announces new destinations.

Recent numbers of transported passengers and cargo show that Bratislava airport's efficiency increases every year. In 2003, 480,000 passengers travelled through M R Štefánik. Compared to the previous year, this is a 30 percent increase. The number of passengers in 2002 reached 368,000, 25.5 percent more than in 2001.

"We are confident about your country's great potential. After its accession to the European Union the country's meaning will continue to grow.

"We agree with experts that the Vienna - Bratislava region is one of the EU areas with the greatest potential for growth," said Josef E Burger, chief commercial officer for Austrian Arlines at the launch of its operations in Bratislava at the beginning of this year.

According to Ulrich Wachter, Lufthansa vice president for sales and services for Europe, "the IATA [International Air Transport Association] predicted 6 percent annual growth on the central European market. It is important to be there." Lufthansa began flying from Bratislava airport this May.

Of the 12 air carriers that fly from Bratislava, Slovak Airlines, Sky Europe, and Czech Airlines posted the highest operational results.

Airplanes fly from the Slovak capital to about 25 destinations on regular lines. Compared to a big international airport this is not a lot. However, we must take into account that Bratislava's aiport became international in 1993; before then, it was only in Prague, the Czechoslovak capital.

The number of destinations increases almost every year. In 1998 there were only 14. Although you cannot fly overseas from the Bratislava airport, you can reach big European cities from which you can transfer and fly to America or Australia.

In the summer, the airport usually welcomes more passengers thanks to charter flights to holiday destinations, mainly on the Mediterranean.

However, many passengers use Vienna's big international airport, only 60 kilometres away from the Slovak capital.

New carriers set to enter the Slovak market and run regular lines from Bratislava are trying to fill the market gaps with new lines or to develop existing ones.

Most of them also see significant space for their further growth in central and eastern Europe compared to a saturated or even stagnating western market.

Austrian Airlines and Lufthansa are among the air carriers that started to fly from Bratislava airport only this year. Additionally, Austrian Airlines is interested in taking part in the privatisation of the airport.

The Austrian carrier is not a complete newcomer on the Slovak market. Its representative office has been working in Slovakia since 1992 and its airplanes have flown from Košice (eastern Slovakia) since 1996.

The Austrian carrier decided to fly regularly from Bratislava directly to London, Paris, and Brussels from May this year, although other companies already serve those lines. However, the carrier sees a great future in those destinations.

"New direct flights by the Austria Airlines Group were chosen for their high income potential. The advantage is in the possibility of combining those routes with flights through Vienna," said Burger.

He continued: "There is a significant growth potential in the Slovak air market. For example, the increase in the number of passengers was 25 percent between 2001 and 2002." Austrian Airlines plans to carry almost 155,000 passengers during the first year of its activities in Bratislava.

The German air carrier Lufthansa launched flights between Bratislava and Munich in May 2004. According to Bernd Hahn, head of Lufthansa's branch for the Czech Republic and Slovakia, his company is especially focused on long-distance flights and it wants to offer Slovak passengers the use of Munich's international airport for overseas flights.

"Slovaks are used to travelling to Vienna for long international flights. Now they can also use Munich", Hahn said. "The company's expansion to Bratislava is a logical move, given the proximity to Vienna and Brno and the increase in passengers flying from Slovakia to Germany," he added.

Ulrich Wachter, vice president for sales and services for Europe, said that 95 percent of Lufthansa's income is generated outside of Germany. In line with that policy and development, the company considers the central and eastern market a great opportunity.

"The enlargement of the European Union will increase traffic demands and new business opportunities. Germany is Slovakia's number one business partner. Thes growth rate of the Slovak economy is over 4 percent. We are waking up across Europe. Before we preferred western countries. Suddenly, everybody wants to know a lot about eastern and central Europe," Wachter added.

The new carriers declared that their price policy would take into consideration the purchasing power in Slovakia. Air tickets should thus be affordable and competitive with those of present carriers in Bratislava airport.

So far, the most successful air carriers - Slovak Airlines and Sky Europe - are not afraid of stronger competition at the airport. On the contrary, they see it as a benefit for the client and the whole market.

"Increased competition is good news for the customer because he will be able to choose air carriers not only according to price but also according to services. As Slovak Airlines provides high quality services of a and its ticket prices are comparable with the competition's, we do not think that the new carriers will have a significant influence on us," Marek Reviľák, marketing manager of Slovak Airlines, told The Slovak Spectator.

So far, Slovak Airlines has focused on charter flights. However, this year the carrier's share of regular lines came close to equalling charters. Moscow is its most successful destination. "Brussels also looks very interesting, as the number of passengers is increasing," said Reviľák.

"The arrival of other air carriers at the Bratislava airport confirms that the launch of Sky Europe Airlines in Bratislava was the right strategic decision. Since then, Sky Europe has acquired three years of experience, opened bases in Slovakia, Poland, and Hungary, extended its fleet to 13 aircraft, and carried more than 300,000 passengers," said Stanislav Šaling, the public relations manager of Sky Europe Airlines.

Sky Europe pioneered the low-cost service model on the central European market. Šaling said that his company is adjusted to the local economies and consumer mentality, which the carrier sees as its strengths on the market.

The carrier considers its most successful lines to be those to London, Paris, Zurich, and Košice. It also believes that routes connecting central European capitals like Bratislava, Vienna, Budapest, and Warsaw will become more and more popular.