Florists get time in the sun

BEFORE it was easy. You entered a florist's shop and asked for one, three, or more carnations. Sometimes you could choose between red and white. In spring and summer, tulips, narcissuses, and sword lilies - the ordinary flowers one could find in any garden - enlarged the offer. But if you were late, the choice was definite: the red carnation.
When communism fell, exotic flowers began to claim their place next to the traditional, local types. 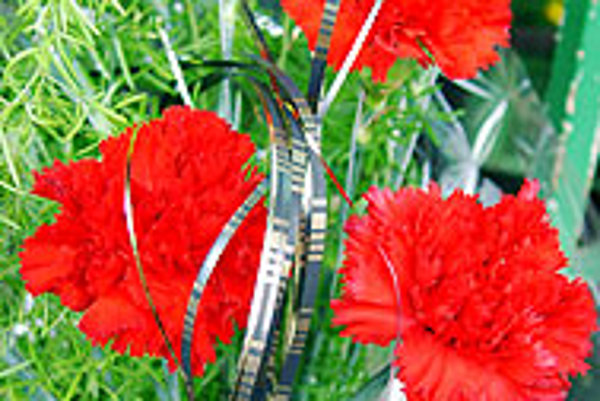 Font size:A-|A+  Comments disabled
BEFORE it was easy. You entered a florist's shop and asked for one, three, or more carnations. Sometimes you could choose between red and white. In spring and summer, tulips, narcissuses, and sword lilies - the ordinary flowers one could find in any garden - enlarged the offer. But if you were late, the choice was definite: the red carnation.

When communism fell, exotic flowers began to claim their place next to the traditional, local types. Today there are so many of them on the market that one can barely recall their names or take his or her eyes away from the elaborate arrangements.

"Some customers are seeing some of the flowers for the first time in their lives," said Bibiana Csomorová from Orchidea, a favourite Bratislava landmark on the corner of the Main Square that recently celebrated its 10th anniversary.

"On the other side, foreigners are stunned by how many types of flowers we offer, something they thought was possible only in their [non-communist] homes."

The number of flowers in Orchidea has climbed to thousands of pieces ordered each week and customers continue to pour in almost constantly. The young 20-member staff, rotating in a team of five or six a shift, say they barely have time to relax.

"Every time I go by when I don't want to buy anything, I still peer in anyway, just to see what they have that's new," said a young Bratislava woman while stepping out of the shop.

The flowers delivered from the Netherlands, Italy, Ecuador, Columbia, and local suppliers add up to around 40 different types, depending on the season. Many types also have subsections - for instance, there are four kinds of lilies. The most exotic things currently on offer include decorative garlic or pineapple, papyrus, and thistle.

"We may boast between ourselves [the stylists] how many different kinds of flowers we have here, but the customers often have no clue how to put them together [into a bouquet]," said Csomorová, while giving the example of one woman who first selected a few exotic types but then, as the stylist was assembling them, changed her mind and opted for traditional red roses.

The 32-year-old stylist came to Orchidea in 1997, when the shop occupied a small window on Rybárska brána, today a currency exchange booth next to the Mezzo-Mezzo restaurant. Having no experience in floristry, she was lured by some 20 unknown flowers she saw there.

The days when she would spend long hours perfectly assembling three roses have passed. Now, Csomorová is one of the Orchidea stylists whose fantasies dictate the arrangement trends of the city.

Always ahead of other florist's shops in town, Orchidea constantly refreshes its styles by attending international flower workshops and then bringing the world trends back home, scattering them among their colleagues. Several of the employees have won local and international competitions in flower arrangement; many trained under the supervision of Orchidea's manager, Michal Haut.

"We specialise in assembling the flowers into more interesting arrangements than [you find] elsewhere [in town]. Moreover, each of us has his or her own style," Csomorová said. Her colleagues, all of whom were hired with experience, nod their heads and add: "You won't find two identical bouquets here made of the same flowers."

The boom of supplying post-communist markets with newer and newer exotic types of flowers is slowly stabilising. Not so the trend in assembling them. Literally, each day brings something new that uproots the 40-year tradition of the red carnation.