THE HISTORIC removal of the borders between Slovakia and Austria on May 1 is the main theme of the project that opens this year's Bratislava in Movement festival, which will run from May 22 to 30.
Begun on May 10, the Austrian-Slovak project Borders aims to fuel long-term cooperation between the artistic communities of the two countries' capitals. It draws from the past and present relationship between the two cities. 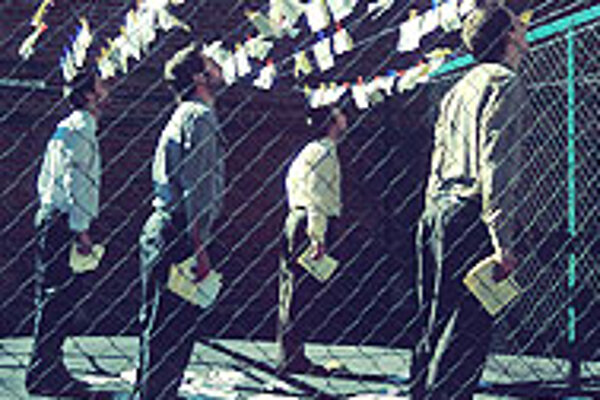 Font size:A-|A+
THE HISTORIC removal of the borders between Slovakia and Austria on May 1 is the main theme of the project that opens this year's Bratislava in Movement festival, which will run from May 22 to 30.

Begun on May 10, the Austrian-Slovak project Borders aims to fuel long-term cooperation between the artistic communities of the two countries' capitals. It draws from the past and present relationship between the two cities. Spurred on by the official removal of borders, it deals with the deeper impact the boundaries have had on the two capitals, their architectures, and their people.

"It's an art project that, by interlinking various media, tries to be a socio-psychological contemplation on the idea of borders. Subtitled Duty Free Border Fiction, it is an artistic reflection of the fact that once Bratislava and Vienna were in one monarchy, then not, and now they are part of one territory again," said Miroslava Kovářová, the festival's director.

The public can join the creative group of Slovak and Austrian artists, dancers, and political scientists and follow their work process from May 17 to 22, daily from 18:00, at the Café Cinema, Obchodná 58. The discussions will be in English.

They will present the results of this two-week project on May 22 at 18:00, officially opening the eighth year of Bratislava in Movement, the international festival of contemporary dance. For nine days, until May 30, dancers from mainly European countries will perform.

"An attractive, interesting presentation for a large audience will be the project by the French group of Nathalie Pernette [on May 22]. They combine live classical music with hip hop [dance]," said Kovářová.

She also singled out the performance For Whom Am I, by the American group of Peggy Piacenza. Choreographed to music by acclaimed contemporary composer Fred Frith, it also uses animated film to explore the role and identity of theatre in culture.

Norwegians come to the festival with a show by one of the country's most famous choreographers, Jo Stromgren. "It is physical theatre, nicely aggressive, very manly. The four performers are trained actors as well as dancers and they use a special, nonsensical language," the festival's director said.

Apart from other performances by German and Italian winners of international competitions, the festival will bring three evenings by Slovak dancers, two in the Aréna theatre and one in the Stoka theatre. The former will present the latest premiere by the Banská Bystrica Dance Studio - Sectio, and Mirákulos! - on May 25, and two days later it will hold a three-performance evening by different Slovak choreographers. Stoka will feature three smaller projects: two solos and a duet.

As is the tradition, dance workshops will accompany the festival. Mary O'Donnell Fukerson from the Netherlands, for example, has prepared a special lecture-performance project in which, through dancing and using various media, she shows the different aesthetic movements dance underwent in the 20th century.

The opening project, Borders, will continue in October in Vienna, where it will come to an end. The complete results will first be presented to the Vienna audience (October 15 and 16) and then to Bratislava spectators (October 19 and 20).