Skating over the issue

AT MIDNIGHT on May 1, Slovakia became a member of the European Union, one of the most significant developments in the country's turbulent political history since the Velvet Divorce of 1993, when it was divided from the neighbouring Czech Republic.
The last day in April heralded the beginning of the celebrations, with musicians and dance troupes from all over 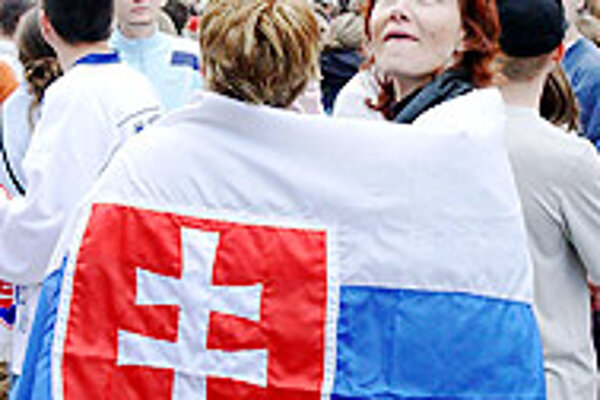 Font size:A-|A+  Comments disabled
AT MIDNIGHT on May 1, Slovakia became a member of the European Union, one of the most significant developments in the country's turbulent political history since the Velvet Divorce of 1993, when it was divided from the neighbouring Czech Republic.

The last day in April heralded the beginning of the celebrations, with musicians and dance troupes from all over Europe performing in Bratislava's main square, but by mid-evening, the crowds that had gathered to witness these spectacles had thinned out considerably, those left being mostly of foreign origin.

What could possibly be important enough for Slovaks to postpone the run-up to this momentous occasion? The answer, I discovered, was not far away. As the onset of rain persuaded me to seek shelter in a nearby pub, I found that every seat was filled, and instead of the live music that was advertised in the window, the occupants were staring engrossed at the flickering images on a pull-down television screen. The air was charged with excitement, and it became clear that all thoughts of an expanded Europe had been cast aside, and everybody's concentration was focused on one main event: the World Ice Hockey Championships.

Continuing my quest to uncover the heart of my adopted homeland, I settled in and watched with bewildered fascination, managing to establish the basic rules as the fast-paced game unfolded before my eyes.

A couple of hours later, following a successful result, the crowd dispersed into the streets, triumphant, flags held aloft and voices raised with joyous song. As midnight came and went and the revelry continued, it was difficult to determine the exact reason behind it, although I suspected that, had the hockey gone the other way, the mood would have been considerably more sombre.

My interest piqued, I followed keenly the progress of the Slovak team over the course of the next week as they inched closer to world victory, and by the time the semi-finals arrived on Saturday, I was hooked.

Pitted against Canada for a place in the final, the game was tense and, along with an army of red-white-and-blue-shirted Slovak fans, I found myself perpetually lifting off the edge of my seat with the anticipation of every chance at goal. Unfortunately, it was not meant to be, with the final score in favour of the Canadians, although, according to many, had a foul against Ján Lašák, the Slovak goalkeeper, not gone unnoticed by the referee, the result could have been very different.

Disappointed but resolute, the focus of the nation turned to the following day's battle against the USA for the bronze, and when it arrived the fans returned in droves to gather around television sets throughout the country.

I myself was once more drawn to the nearest big screen, and as the game started, I became rapidly enveloped in the enthusiasm of my fellow spectators. The allotted time passed all too quickly, in addition to 10 minutes of extra time, and with the score still tied at 0:0, everything was riding on a penalty shootout.

The atmosphere became one of anxious excitement, and I was strongly reminded of the feeling that was prevalent in pubs throughout the UK during last year's Rugby World Cup final, in which England narrowly beat Australia in the closing minutes.

Less than 10 minutes later it was over and all was lost. Faces all around me were coloured with dejection, disappointment, and grief, although I couldn't help but be impressed by the positivity with which the players' performance was discussed.

I was surprised to feel that, before long, the mood lifted as talk turned to next year's prospects, and as I left, I took away with me a great admiration for the spirit of optimism that was starting to ripple through the crowd, and marvelled at the steadfastness of this proud nation.

To those sceptics who are critical of accession to the EU, fearful of a loss of national identity, I say this: It seems to me that the flag of Slovakia will continue to inspire, and borne on the chests of every hockey-shirted citizen, will remain the emblem of national pride, probably until hell freezes over. Even then, I think we're in with a chance.