Fruit sellers should know about EP

FORMER TV Markíza reporter Eva Černá was among Slovakia's most popular television faces before deciding to run for parliament in the 2002 general elections with the New Citizen's Alliance (ANO).
Černá, who had little political ambition, made no secret that it was at the plea of ANO founder and former Markíza boss Pavol Rusko, currently the country's economy minister, that she conceded to join politics.
The former TV journalist is second on ANO's ballot for elections to the European Parliament (EP). 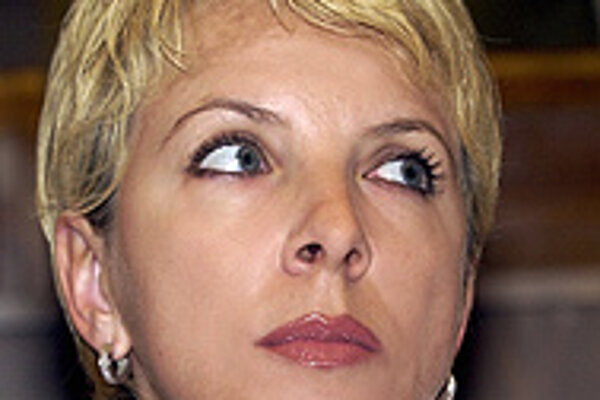 Font size:A-|A+0
FORMER TV Markíza reporter Eva Černá was among Slovakia's most popular television faces before deciding to run for parliament in the 2002 general elections with the New Citizen's Alliance (ANO).

Černá, who had little political ambition, made no secret that it was at the plea of ANO founder and former Markíza boss Pavol Rusko, currently the country's economy minister, that she conceded to join politics.

The former TV journalist is second on ANO's ballot for elections to the European Parliament (EP).

However, media have repeatedly reported that Černá won the top spot on the list in the party's internal selection process and that the decision was later overturned by ANO's top leadership, in contradiction with the party's rules, in favour of Jozef Heriban.

The Slovak Spectator met with Černá on May 18 to talk about Slovak politics and aspirations as a potential MEP.

The Slovak Spectator (TSS): Before the 2002 parliamentary elections you voiced your dislike of politics. Have you come to enjoy it?

EČ: No. Every day when I have to go to parliament, I am reluctant. As a journalist, I had terrible experiences with politics before the 1998 parliamentary elections [which ended the rule of authoritarian PM Vladimír Mečiar]. That stuck in my mind - the dirty things that went on during that time. You can't forget that.

I have done a great deal of work as an MP. But I still don't like this building and I still don't think that this is a positive place. But it's definitely a different place from what I experienced as a journalist. It has improved tremendously and I have met many clever MPs that few people know about.

TSS: What convinced you to overcome the dislike of politics and run in the EP elections?

EČ: I have a dislike for Slovak politics, not foreign politics. Whenever I have a chance to work with colleagues from other countries, I see that politics abroad is at a much higher level. There, agreements are kept. Here, I'm a lone soldier. Alone in the party, alone in the fight for things I believe are right.

TSS: Are you alone in the ANO?

EČ: Yes, I feel absolutely alone, and lonely, and independent. I have no problem with that; I have always been independent.

TSS: What is your response to claims that you, not Heriban, were elected to lead the party in EP elections?

EČ: I have never commented on that, and I never will.

TSS: Specific comments aside, are these claims true or not?

EČ: I'm not the one to gossip. The fact that men can't hold back and have to run to the press with their hassles, that's their matter. I don't want to make anyone around me nervous or harm anyone. God will sort it out. You can't let some things get to you.

TSS: Even at the start of the campaign, many parties did not have their election programmes ready. Your own party initially used billboards, which had to be replaced due to low quality. Did Slovak parties underestimate the elections?

EČ: I won't judge others. As for us, we certainly did not underestimate them. But everything depends on people. We started working on time. The fact that media "experts" mishandled the start of our campaign is a different matter.

There are a lot of complaints about the expected low voter turnout. The government was the one to underestimate the situation. People know very little about these elections. [That's part of the reason why] the ANO abstained from the vote of no confidence in [Deputy PM] Pál Csáky.

If a fruit seller in [the Bratislava quarter of] Dúbravka doesn't know that EP elections are coming up [as is the case], something is very wrong. He should know. That's my barometer.

TSS: People also have trouble understanding the role and powers of the EP. What can be done about that?

EČ: People have trouble understanding the entire EU because of its extensive bureaucratic apparatus. In Slovakia we thought that we had a huge bureaucracy, but the union makes us look like amateurs. Someone will have to stand up to that.

TSS: In what ways is the ANO's programme different from that of other parties?

EČ: I have not read what other parties have to offer. I will tell you outright - I have no time for that.

Our programme is based on general liberal concepts. In a way, it copies the agenda of the European Liberal, Democratic, and Reform Party. There is personal responsibility, freedom.

We have a special focus on the development of small and medium-sized enterprise.

TSS: Is there any field in which you have particular personal interest?

EČ: For me it's always been human rights. That's something I feel very passionately about, although I did refuse to work in the Human Rights Committee of the Slovak parliament after Mečiar became its member. I nonetheless love and remain very active in this field. The same goes for social affairs. I'm interested in issues such as children's rights, domestic violence, development, and population in the European and global context.

TSS: The European constitution is among the top issues on the European agenda. Should the final text be approved by a referendum?

EČ: No. There should be no referendum here for one simple practical reason - so far, none have been valid. Except for the referendum on EU entry, which was also close. I would not want to burden the people with this; they have enough of their own worries.

Moreover, the debate will now be mainly about whether to mention God in the constitution or not. Most people of this country don't find that important.

TSS: Who should be the next European Commission head?

EČ: I have been observing European politics from somewhat of a distance, so I'm unable to make a definite judgement. It should be someone who is honest, open, and assertive who loves all nations of Europe and the European Union. As far as the known candidates go, Pat Cox would be a good choice.