The cuisine of integration and a view of the Mound

Propeler Café
Where: Rázusovo nábr. 1, Bratislava
When:daily 10:30-23:00
Reservations: Yes
English menu: Yes
Tel: 02/5443-5651
Rating: 2 out of 10
ONE of Bratislava's newest attractions is a pile of dirt. That's right, there is a pile of dirt down on the riverbank a stone's throw from Hviezdoslavovo Square and the National Gallery. 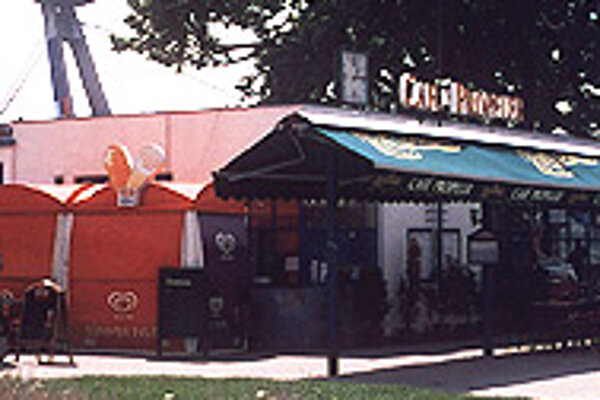 This mound, as it is called, is multi-purpose. First created last September to celebrate the anniversary of the city's first coronotation of a king, it replicated the mounds made of soil from across the Habsburg Empire for the coronations of its rulers as a symbol of territorial unity. This May, its symbolic value was cashed in during EU-entry festivities, when dirt from all 25 members was placed on it (in discreet piles, of course, in line with the sanitary partitions of nationalism).

Directly adjacent to the riverfront Integration Mound is the Propeler Café (that's how they spell it), which is no newcomer to the city's restaurant scene. The new attraction must have been a medal of pride for the café and brought a boost in business.

But when asked if this was so, our waitress looked confused. When we explained that there was a mound next door that represented the unity of the EU, her expression cleared a little. She managed a hesitant "I don't know. I guess so," when we asked whether the café was proud to be near the Mound.

The purpose of our visit was to see if Propeler had spiced up its menu in response to the new nexus of nations. At this, the waitress laughed and said no, returning to her other customers, who were complaining about the slow service.

Perhaps, unbeknownst to her, the chef had begun a series of daily menus from each EU member nation. If this hypothesis is true, the day we chose to stop by was Slovak Day - we had the mushroom soup and bryndzové halušky lunch menu. The soup was bland (my friend recommends that the chef use salt and pepper), and the halušky tasted like soggy paste.

In fact, from the café's menu you can order an assortment of grilled meat and potatoes so generic that it might be found in any of the union's 25 states. The gyros (hey, those are Greek!) seem a popular choice at Sk45, as do the čevabčiči (Sk85), which are a kind of Balkan meat speciality (Slovenia is in the EU too).

Ranging between Sk165 and Sk250 for steaks and various cutlets, the bigger plates get more expensive. The café also has a few fish dishes.

If this is the result of integration, then I do not blame the architects of the Mound's symbolism for keeping the dirt of different shades and origin in separate heaps - if they had mixed them together I imagine the resulting colour would have been the blandest of browns.

When you do visit this café, be sure to tell your date to meet at the Propeler next to the Mound, because there is another Propeler just across the river that sells beer for Sk17 through a window to people who want to sit in the grass and sometimes see live concerts. Beer by the Mound goes for Sk35, for obvious reasons.